Once upon a time, there was a lonely and neglected body of water running through Porterdale, Ga., that was snubbed by its shore-bound population for many decades. Until, that is, some visionary volunteers decided they wanted their waters to be an active gateway for solitary sports such as fishing, canoeing and kayaking. Out of the massive clean-up that followed came the dawn of the Yellow River Water Trail. 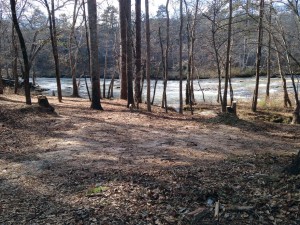 This area was very dense and overgrown. The city cleaned it and opened up the view of the river in the Porterdale Yellow River Park. (Photo provided)

“This whole project began with the interest expressed by kayakers and river-keeper volunteers. It wasn’t really just one event,” said Bob Thomson, Porterdale village manager and board member of the YRWT.

“For a long time the river was bypassed and allowed to accumulate trash, both in the water and on the river banks. When more people started using it for kayaking, they saw the junk that had been accumulating through the years.

“The YRWT was formed and it took off from there to serve the region. We applied for and received a grant from Recreation Trails Program, which allowed us to construct a kayak ramp,” said Thompson.

A water trail is the water equivalent of a hiking trail. Similar examples are blueways, canoe trails and paddle trails. These trails — used by picnickers, hikers and anglers — have access points along the river for putting boats on the water or taking them off. 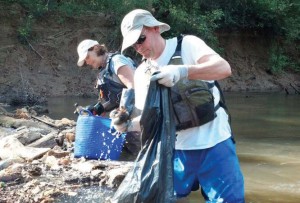 Development of the Yellow River Water Trail in Porterdale, Ga., and Rockdale, Newton, DeKalb and Gwinnett counties involved a “massive” cleanup, according to Tonya Bechtler, chairman and public outreach coordinator of the YRWT. “We cleaned four dumpsters of trash off the river.” (Photo provided)

According to Tonya Bechtler, chairman and public outreach coordinator of the YRWT, the once-abandoned Yellow River did a 360-degree turn. With the recent Porterdale Yellow River kayak launch built in 2014, the effort has opened up a whole new world for outdoor recreation and family fun and brought Newton County up close and personal with their backyard rivers.

“Our very first picture on Facebook was in 2011. In 2013 we spent eight months training under the Georgia River Network, then officially launched in January 2014.”

For kayaking there needs to be flat water — aka “recreational” — and also whitewater, according to Bechtler. The Yellow River has three sections of whitewater. 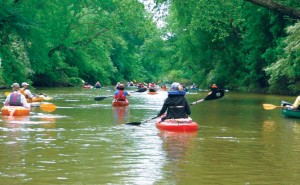 After kayakers initiated a discussion about the state of the neglected Yellow River, Porterdale, Ga., outdoor enthusiasts rallied to clean up the waterway. Residents and visitors of all ages now enjoy a variety of activities on the waterway and its banks. (Photo provided)

The combined efforts of Yellow River volunteers landed the Georgia River Network the Watershed Group of the Year recognition in 2014. Every dollar raised goes directly to the communities for marketing, boat launches, paddles and water testing, to name just a few things, said Bechtler.

“Last summer brought well over 500 people brand-new to kayaking in Porterdale,” said Bechtler. “As volunteers for the YRWT, we couldn’t be more excited to see the number of vehicles sporting around Newton County with boats on top.”

Porterdale Yellow River Park, which once saw only a car or two visiting at a time, now has a crowd every weekend.

“With an outfitter sold out most weekends, we definitely are seeing a huge surge in outdoor recreation,” said Bechtler of the water trail, which is being developed in phases. Not only that, but the cleanup endeavor has Georgia Adopt-a-Stream volunteer water testers on the water monthly.

Thomson added that downtown business traffic had greatly increased as a result of the new trail. 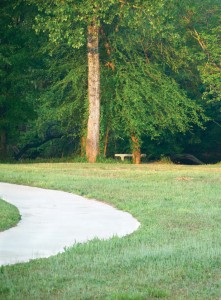 “Also, we got great publicity and more folks are taking advantage of the Yellow River and its trails,” said Thomson. “It’s used heavily during the weekend, and the Georgia Conservancy is sponsoring a big paddle this fall.”

A “paddle” is an event when kayakers and canoeists come to an event for fun on the river. Th e next one will be Oct. 3, in conjunction with an outdoor concert.

Some of the costs of the project included volunteer expenses like trash bags, said Bechtler.

“The trails and kayak launch cost around $90,000, but 80 percent of that was grant money,” said Thomson. The project has resulted in Porterdale being named a Main Street community and adding a marketing director.

A popular shop on one of the new boat ramps is the Porterdale YAK Club, which does a good amount of business and lends itself to socialization, bringing people together in a shared pastime. The YAK Club also does ongoing weekly cleanup of the river and banks, and its name has added an element of humor to discussions about promoting the city.

“Want to have a little bragging fun with your out-of-town friends? Tell them you’re a member of the esteemed Porterdale YAK Club, and don’t mention the, um, different spelling of “yacht” (as in kaYAK),” Thomson said.

Th e “Mellow on the Yellow” folks could not have gotten as far as they did on their own. Several other Yellow River partners also contributed to the venture: the Georgia River Network; city of Porterdale; Newton County Water and Sewer Authority; Berry’s Tree Farm; city of Covington; Newton County; Jackson Lake Homeowner’s Association; Keep Covington Newton Beautiful; and Newton Trails.

Four counties contain the water trails: Gwinnett, DeKalb, Rockdale and Newton. The yrwt, which is being developed in phases, offers varied membership levels.

For more information about the Yellow River Water Trail, contact Bechtler at info@yellowriverwatertrail.org; or text or call (770) 364-0911.