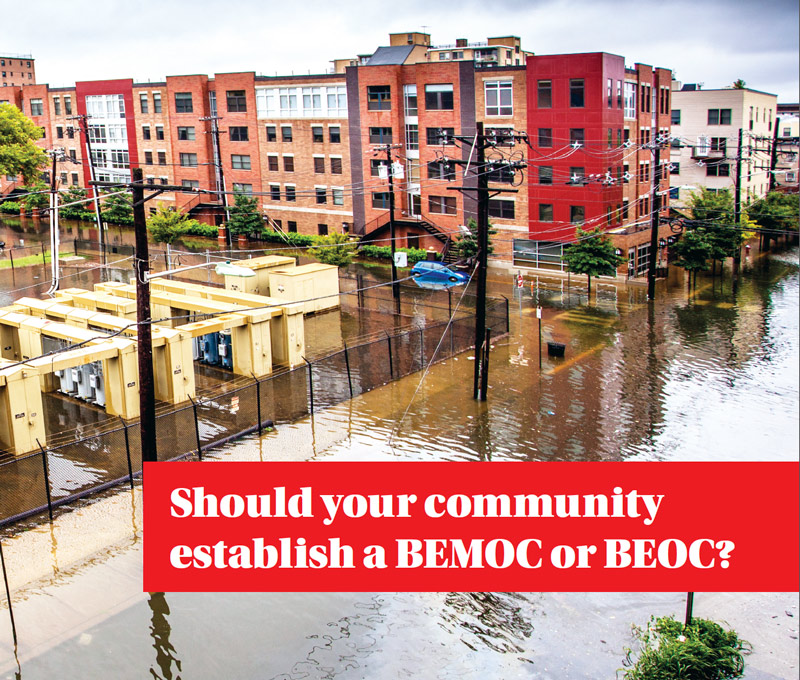 When it comes to preparing for, responding to and recovering from an emergency situation, proper communication between the public and private sector is the key to keeping infrastructure up and running. Across the nation, big cities and smaller municipalities have worked hard to create better channels of communication between government entities and the public through a wide range of multimedia portals. But is it enough?

Some experts say it’s only half of the solution and does not allow the public to be involved in the pipeline. Bradley Schreiber, president of Homeland Security Solutions, said one way a community can improve communication between the public and private sector when disaster strikes is to establish a business emergency management operations center or a business emergency operations center. These centers can take the shape of either a traditional brick-and-mortar facility or a virtual one and allow for multilateral communication between the affected entities. 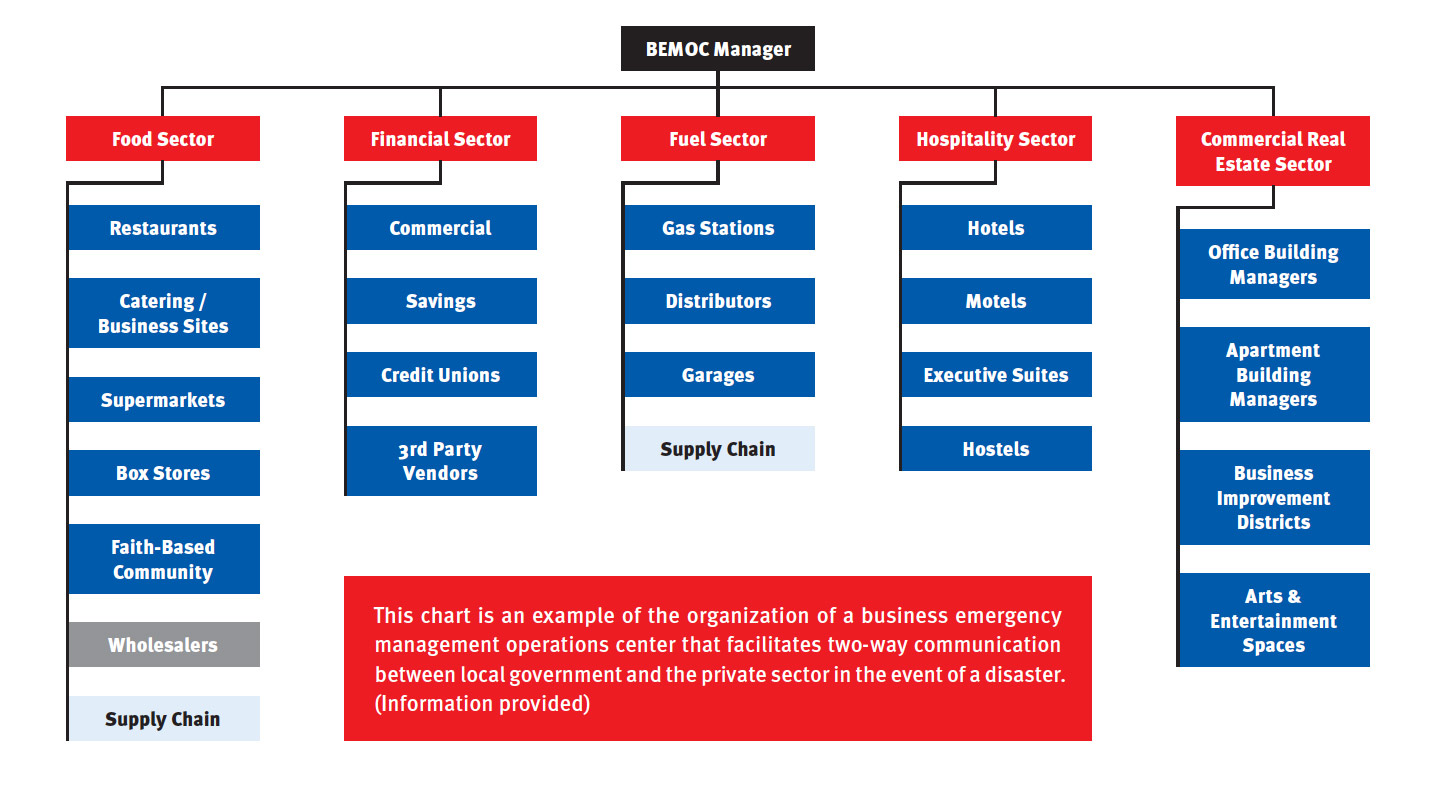 “What happens in a lot of cases is that the government takes on the role of responder while the public leads the charge in recovery… to get the community up and running again,” he said. “No matter the size and scope of the disaster, whether man-made or natural, when things go south they go south quickly. We have to come together to face these challenges and move forward. The burden of response can’t be borne by the government alone. It must be supplemented by the private sector.”

Schreiber was involved in the establishment of Washington, D.C.’s BEMOC, which is both a brick-and-mortar and virtual organization. It operates year-round to provide the private sector with situational awareness, training, exercises and best practice development programs that focus on disaster planning, response and recovery. Membership into the BEMOC is free and open to all companies that do business in the District of Columbia and is divided into sectors and subsectors that are overseen by a BEMOC manager.

It works similar to a phone tree; however, information does not only get passed from the top down but from the bottom up as well. Schreiber said that while communities are often very good about getting some general information out there, such as what roads are passable and which ones aren’t, in the case of a natural disaster this system allows the private sector to facilitate a more effective response.

“For example, if I am a small business located in a quadrant that is experiencing a power outage, but my street is OK, I could report that they don’t need to come here. Or if my road is impassable, I can let them know if it’s a downed tree causing the problem so they can send the right equipment right away. It establishes two-way communication,” he said. 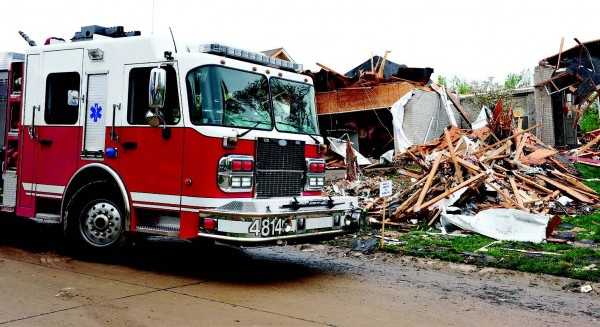 Eight or nine states have some form of BEMOC or BEOC, though not all of them follow the same business model. The first to set something up was Louisiana in the wake of Hurricane Katrina; however, California, Missouri, Florida and Kentucky are among others that have put something in place.

While it may appear that this is something that can only be done on the state level or in a larger metropolis, Schreiber said it’s a concept that’s scalable to whatever size operation a community needs.

The New Jersey Business Force model The New Jersey Business Force, a partnership in the BEOC Alliance, developed a Business Emergency Operations Center private sector/public sector partnership model in 2007. It consists of an interoperability framework that has been tested during four national level exercises. The BEOC model functions as a virtual command center and has been physically activated on several occasions, in parallel with the FEMA national BEOC.

The BEOC Alliance seeks to improve and strengthen the capacity of local, county and state governments; FEMA; their business partners; and NGOs in preventing, preparing for, responding to and recovering from disasters of magnitude through a dynamic partnership triad comprising academia, private sector entities and government. It focuses on education and scientific research to accomplishing its mission. Source: www.beocalliance.org

“If you are a one-traffic light town, you may not need one, but the model is designed to be scalable to any size town. The cost is dependent on what you are trying to build, whether it is virtual or brick-and-mortar; but if a small community can’t do it on it’s own, it can partner with other jurisdictions to create a regional BEMOC or BEOC,” he said.

According to Schreiber, the major cost is in the amount of manpower it takes to develop relationships with the business community and to coordinate the operation so it is as effective as it can be. Still, he feels it is the next generation in disaster planning, emergency response and recovery and is something that communities need to look into.

“It doesn’t cost that much and the impact is so much greater. It’s a mechanism for everyone to work together in real time for the improved deployment of resources, which improves a community’s ability to bounce back.”

Although communities across the nation are looking into establishing their own BEMOC or BEOC, FEMA has created the National Business Emergency Operations Center as a groundbreaking virtual organization dedicated to providing two-way communication between the public and private sectors during a national crisis.

According to the organization’s press release, the goal of NBEOC is “to take FEMA’s current private sector representative — an emergency manager serving a 90-day rotation in the National Response Coordination Center — and provide (the role) greater structure and a deeper bench.”

Participation in the program is voluntary and open to all members of the private sector, including large and small businesses, associations, universities, think tanks and nonprofits. Organizations interested in joining or sharing ideas can contact FEMA-PSR@dhs.gov.