A new report from the U.S. Public Interest Research Group Education Fund and the Frontier Group shows mounting evidence that the millennial generation’s dramatic shift away from driving is more than temporary. While the 2000s saw a marked decrease in the average number of miles traveled by young Americans, the study explains that this trend appears likely to continue even as the economy improves — in light of the consistency of millennials’ surveyed preferences, a continued reduction of millennials driving to work and the continued decreases in per-capita driving among all Americans.

After five years of economic growth with stagnant driving, it’s time to wake up to growing evidence that millennials don’t want to drive as much as their parents did. This change has big implications and policymakers shouldn’t be asleep at the wheel.

Tony Dutzik, senior analyst at the Frontier Group and co-author of the report, along with myself and Jeff Inglis, said millennials are trying to send a message to policymakers: “We want convenient, walkable neighborhoods with many options for how to get around. Unfortunately, many of our nation’s transportation policies work to ensure just the opposite result.”

The report documents the shift: 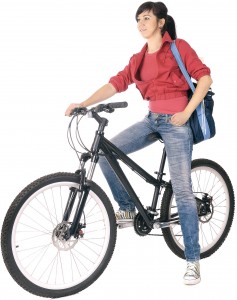 • Census data shows that the share of 16- to 24-year-olds traveling to work by car declined by 1.5 percentage points between 2006 and 2013, while the share of young people getting to work by public transportation, on foot or by bicycle, or working from home, increased.

• Young people age 20 to 30 are less likely to move from central cities to suburbs than at any time since at least the late 1990s.

• Millennials consistently report greater attraction to less driving-intensive lifestyles — urban living, residence in “walkable” communities and openness to the use of non-driving modes of transport — than older generations.

• Fewer young people are getting their driver’s licenses than even a few years ago. The percentage of high school seniors with driver’s licenses declined from 85 percent to 73 percent between 1996 and 2010, according to the AAA Foundation for Highway Safety. Federal data suggests that the decline has continued since then.

Millennials are the largest generation in number and they will be the chief users of transportation investments that get made over the coming decade. Millennials are expected to drive more as they reach the peak driving years of middle age, but if they drive less — or even no more — than their parents did in middle age, it will be a monumental shift in travel trends and the assumptions underpinning current transportation policy.

“The report confirms that attracting and keeping young residents and talented workers requires investment in a comprehensive transportation system that offers a wide range of options for walking, biking, transit and getting around by vehicle,” said James Corless, executive director of Transportation for America. “We urge Congress to update our national transportation program to reflect changing needs in our economy and in local communities.”
In reviewing a wide range of data from the last few years, the report finds that many of the reasons millennials are driving less are long-term trends.

• The recession may have caused some millennials to delay forming separate families that would likely drive more, but Americans have been getting married and having children at a later age nearly continuously since the 1960s. These trends continued during the recovery.

• Graduated driver licensing requirements adopted in recent years by state governments have likely played a small but important role in causing young people to delay or forgo getting a driver’s license, potentially encouraging millennials to develop less car-dependent transportation habits that they carry with them as they age.

Americans drive fewer total miles than we did in 2005 and fewer miles per capita than we did in the mid-1990s. People are riding public transportation more than at any time since the mid-1950s, and the number of people working at home continues to surge. Bicycling has become the fastest-growing mode of commuting. Demand for housing and office space in walkable neighborhoods
of many cities is outpacing the supply of new construction.

With millennials driving less and showing signs they might continue to do so, it’s no longer true that the amount of driving and traffic can go in only one direction. If millennials are able to continue driving less than did previous generations at the same age, then America will have an opportunity for reduced traffic congestion, fewer deaths and injuries on the roads, lower expenditures for highway construction and less pollution of our air and climate.

The report calls on public leaders to rethink their transportation investments to accommodate and encourage the millennial generation in its desire for less car-intensive lifestyles. This includes greater investment in public transit and biking infrastructure, and using highway funds to repair existing roads rather than building new wider highways. State and federal governments should also assist efforts currently being led by cities to encourage walkable communities and innovative uses of technology that connect travelers to more travel options and shared vehicles.