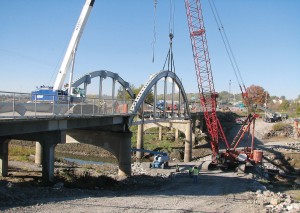 Disassembly by MoDOT of the Highway 40 bridge over the Blue River during late summer. (Photo provided)

Reusing a bridge that has been deemed historically significant preserves local and cultural heritage, and represents a responsible use of resources. The federal program that mandates this type of transfer of ownership, however, as well as mitigation of the impact of changes to and the replacement of historic bridges, exhibits widely varied results from state to state.

Missouri state and local bridges were inventoried, as directed, during the late 1980s. About 1,800 were determined to have some sort of historic significance. Almost a decade later, the Missouri Historic Bridge Inventory Survey determined that over 300 of them were eligible to be listed on the National Register of Historic Places.

In compliance with the Surface Transportation and Uniform Relocation Assistance Act of 1987, and its successor, Moving Ahead for Progress in the 21st Century, or MAP-21, the Missouri Department of Transportation offers historic state bridges that are at the end of their useful life in their current setting, or need to be removed as part of an improvement project, free of charge for reuse by cities, counties, villages and nonpublic entities. Before that happens, though, and per the national Historic Preservation Act, MoDOT conducts a thorough alternative analysis to try to keep the bridge in its current location, while not impacting its historic value. Often times, the decision comes as the result of a comprehensive consideration of the entire scope of a larger project that includes the bridge structure, as well as the need, funding and prioritization of that particular project. 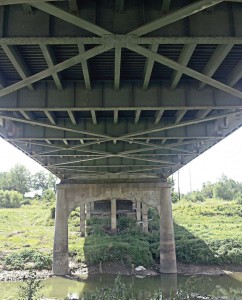 A view from of the underside of the pre-disassembled bridge. (Photo provided)

“You might look at mitigating or trying to rehab. But at what cost? And would it fulfill the purpose and need of the community?” said Toni Prawl, MoDOT senior historic preservation specialist and historic bridge coordinator.

There are any number of other acceptable uses. It may be, for example, that the bridge is too narrow for the type or amount of vehicular traffic that has developed in its current location, but plenty wide enough for vehicular traffic in another place. It could also be viable for another type of adaptive use, such as a pedestrian bridge either in place or in another location. “We’ve even had inquires from farmers,” said Prawl.

The transferee must agree, however, to maintain the features that make the bridge historic.
A receiving entity is found only a small fraction of the time, partly because the receiver must pay to transport the structure, either intact or in sections, and to reconstruct the bridge at the new location.

“I’d guess that for every historic bridge we’ve physically preserved, there are at least 10 more we’ve had to demolish” because there were no takers, said former MoDOT Engineer Richard Dawdy. The South Carolina Department of Transportation has reported a similarly low level of serious interest. On the other end of the spectrum, Indiana and Montana are among the states that’s efforts have moved a number of decommissioned bridges.

If the deconstruction timeline set by the donor doesn’t suit the receiving city, it can pay to have the structure deconstructed sooner. Federal funding is available to reimburse up to 80 percent of that cost.

The challenge for MoDOT has been the lack of an outline for complying with the reuse mandate and the few regulatory boundaries. Until last year, marketing scratched up only slight interest. In March, MoDOT launched a web page dedicated to the program, with pictures and pertinent information about the bridges it has available.

MoDOT has helped several cities and counties relocate their bridges, but the often-larger state bridges have proven harder to place. MoDOT has been involved in attempts to relocate only two.

A third relocation is currently underway. For more than 80 years a 1932 steel truss bridge spanned the Blue River on Highway 40, just northwest of the Kansas City Royals baseball stadium in Kansas City. It’s now destined for a future in Grandview, a few miles south of that location.

In this case MoDOT performed the deconstruction, because it was ready to begin building the replacement structure. Grandview has partial grant funding in place to restore and install the structure, and Randolph planned to apply for $350,000 in federal Transportation Enhancement Program funds and a second grant this spring, which will pay for part of the relocation cost.

After the structure arrives later this year, it will be painted and prepared for installation over the Little Blue River. The Kansas City suburb has already made significant improvements to many of its park facilities, and the bridge will connect these to the popular Longview Lake Trail, which enjoys heavy pedestrian and bicycle traffic.

“We want to make Grandview a real walkable community,” said Dennis Randolph, public works director. “Between the view, the facilities that are around it and the fact that it will connect our residents to a major trail system, this is going to go a long way toward connecting all of our parks together.”

Randolph is experienced at utilizing and restoring relocated bridges and was instrumental in the creation of the Historic Bridge Park in Battle Creek, Mich. He noted that placing the structures on a trail tends to cultivate public awareness and appreciation.

“What I found out was, people like to be able to get up close and touch the beams. They don’t get the chance to do that very often with a bridge.” Local high school pre-engineering students have been brought into the process, both to give them siting experience and to share the heritage of civil engineering.

The biggest challenge in relocating any historic bridge is the logistics, particularly of the funding and permits required for the transport, Randolph acknowledged.

“Some cities are put off by the money, but grant money is available. It was important for us that people realize we’re not neglecting infrastructure to do this, because of the grants.” 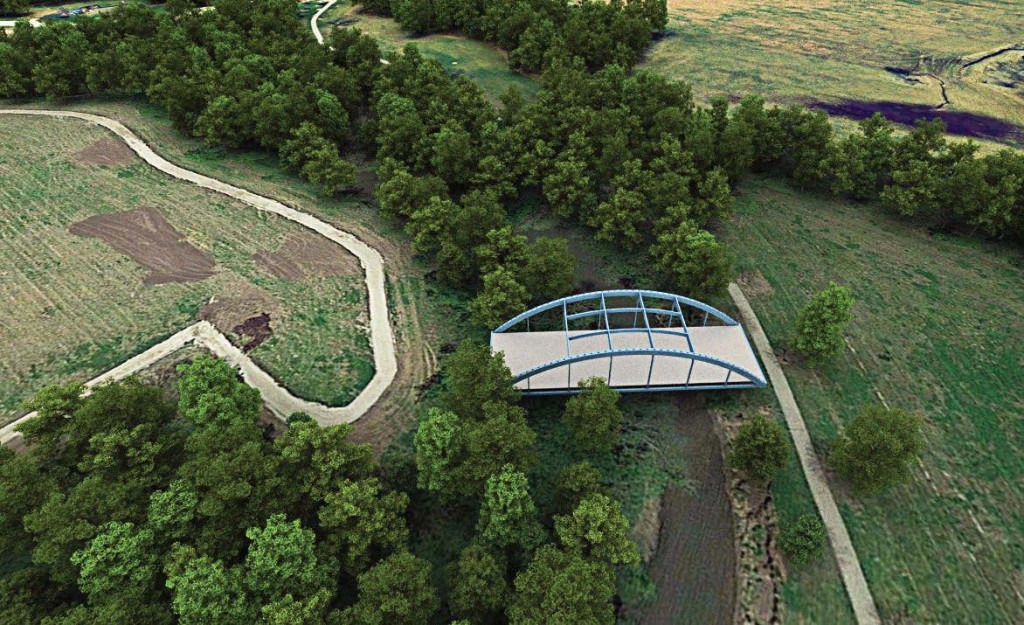 This drawing illustrates how the installation of the historic bridge over the Little Blue River will unite Grandview’s newly expanded park and trail facilities with the Longview Lake Trail. (Photo provided)

Historic bridge reuse marketing: all over the ‘Map’

In 2014 authors, Stephen Mikesell and ICF International, performed a desktop and interview survey of the effectiveness of state bridge relocation programs for the American Association of State Highway and Transportation Officials Standing Committee on Environment, as part of nchrp 25-25 Task 88 of the National Cooperative Highway Research Program. The resulting report, “Transferring Ownership of Historic Bridges: Approaches and Challenges,” confirmed that states have widely varying methods for advertising the availability of a surplus bridge, and thus widely varying levels of success.

Not all historic bridge programmatic agreements even mention marketing or relocation. Others apply only to marketing truss and girder bridges with the logic that only these bridges can easily be moved. A few PAs, most notably Indiana’s and Montana’s, establish highly detailed processes for deciding whether a marketing program is applicable to the structure in question and very specific advice on how marketing should proceed.

The report lists five recommendations to streamline the process for determining which bridges are made available for reuse and for improving marketing efforts. One of those, if adopted by individual states, may also make the structures more attractive to transferees: a reduction in the length of commitment for maintaining the bridge and the features that give it its historic significance.