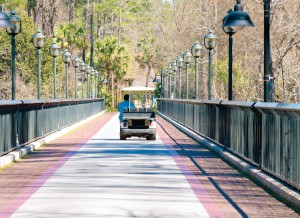 Residents of towns across the country continue to petition for golf cart-friendly local ordinances. Cities in Michigan, Indiana and Wisconsin are among those currently deliberating the possibility. (Shutterstock photo)

Quick, convenient and less expensive than heading out onto the highway, golf carts have long been darlings of the post- 8-to-5 crowd. Ecologically minded residents embrace the low emissions; and in communities that permit their widespread use, residents describe the option of traveling by golf cart as “less stressful.”

Public interest in allowing golf carts on city streets popped up in unexpected places and among unexpected populations last year, including Saginaw County, Mich., and Fishers, Ind. It was also cheered in a double-take population: namely, 15-year-olds in Peachtree City, Ga.

The popularity and proliferation of golf cart-friendly communities drove the National Highway Traffic Safety Administration to issue a final rule in 1998 clarifying how state and local entities would treat their use. The rule differentiated between “golf cars” — the name manufacturers use for the product — and their next-step-up counterparts, low-speed vehicles. Golf carts, by NHSA definition, are manufactured to reach a top speed of no more than 20 mph, while low-speed vehicles — usually also featuring four wheels — have top speeds of between 20 and 25 mph. These must be equipped with headlamps, stop lamps, turn signal lamps, tail lamps, reflex reflectors, parking brakes, rearview mirrors, windshields, seat belts and vehicle identification numbers. Golf carts are “subject only to state and local requirements regarding safety equipment” and use on roadways.

When the issue does arise, more often than not golf cart usage gains permission, via ordinance: But that doesn’t always happen without a glitch.

In 2014 Peachtree City unseated Sun City, Ariz., as golf cart capital of the country. The state is responsible for a majority of the golf cart manufacturing industry, and the vehicles have been in use there since the Atlanta suburb’s incorporation in 1959. In fact, their popularity contributed to the state’s 1974 decision to allow cities to permit them on local streets, if desired.

More than 9,000 golf carts are now registered and roam the city’s nearly 100 miles of tar paths connecting the municipal pool, market, schools, parks and shopping areas. Within residential developments, cart paths running behind homes have replaced the construction of sidewalks in front.

A reduction in regular vehicle traffic has been one of the biggest benefits of lenient and popular golf cart-friendly ordinances, said City Clerk and Public Information Officer Betsy Tyler. Significant quality of life and tourism issues are also noted with some regularity.

“They also add a more friendly component than a closed car — in an open cart on the path, you’re closer to other path users. People wave and say ‘Hi,’ and stop to help obviously lost strangers pouring over the map.”

The biggest challenge, and one that most cities dealing with carts face, said Tyler, was retrofitting the wider 10- to 12-foot-wide asphalt paths into neighborhoods and areas that previously did not have them or had narrower sidewalks. “We also run into challenges dealing with state projects using federal transportation funding that only recognizes sidewalks, and insists on installing them along state highways.”

Some states have recently moved to rein in golf cart usage by requiring specific equipment, insurance or a minimum age for drivers. Peachtree City was grandfathered when Georgia followed that lead in 2012: There, children as young as 12 love the fact that they’re permitted to drive a golf cart if a parent, grandparent or legal guardian is in the front seat. In August the city council pushed the envelope further by passing an ordinance allowing teens as young as 15 to be the primary drivers of golf carts, if other siblings are along and if they posses a learner’s permit.

Peachtree City Chief of Police William McCollom believes public safety benefits from the fact that golf cart use reduces the number of miles driven by regular motor vehicles in the city. He’s known to be good-natured about them and even about the on-the-road antics of inexperienced drivers.

But their presence can create special considerations for law enforcement, he admitted. The department is writing a lot more tickets for cart infractions since August, and parking — especially at the high school — has become an issue.

“Golf carts lack even basic safety measures and are incapable of withstanding even minor collisions from a full-sized vehicle, so proponents should base a motorized cart use plan around a system of paths or trails that will not be accessible to other vehicles,” he said. “Limit crossings to bridges or tunnels wherever possible, and uncontrolled crossings should be well-marked and engineered with the utmost caution.

That’s a higher injury rate than seen with cars, and the causes include cart versus cart collisions, cart versus car, overturned carts, cart versus tree and other such incidents. Higher rates of these incidents should be expected if a community chooses to allow operators below the normal driving age. If underage operators are going to be allowed, then training programs and public information efforts should be directed at potential drivers and their parents to encourage safe operation.

Paddock Lake, Wis., took up the issue during the November election, where it won. Officials there are still fine tuning the restrictions that will apply to the new ordinance. In Michigan, a bill that passed the Michigan House of Representatives this fall would allow cities, villages and townships in that state, if they have a population of 30,000 or less, to also take up the question. The entities could permit the vehicles if they so choose, if a few requirements such as establishing the minimum age of the drivers at 16 are met.