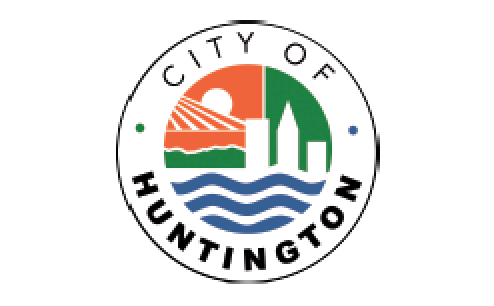 The flag of Huntington, W.Va., is a fairly new one: It underwent a makeover in August 2004 at the hands of a public contest. Mike Steele, a graphic artist who lived in Huntington, created the design, which was chosen through voting on the city’s website and depicts distinguishing local characteristics: the East Huntington Bridge, a mountain ridge, the Ohio River and modern-looking skyscrapers.

The East Huntington Bridge is a 900-foot cable-stayed bridge crossing the Ohio River. It was completed in August 1985. In 2006 it was renamed the Frank Gatski Memorial Bridge in honor of Marshall University’s first member of the Pro Football Hall of Fame.

The Ohio River, along with the rail industry, is an integral part of Huntington’s history. Today the Port of Huntington Tri-State is the largest inland river port in the United States.

The green mountain ridge is a symbol of Huntington’s distinguished park system. The crown jewel of that system is Ritter Park, which was named by the American Planning Association in 2012 as one of the 10 best public spaces in America.

Paying tribute to the progress that Huntington’s downtown has made in the past decade are the modern skyscrapers depicted in the logo. The city’s downtown has bounced back due to the addition of Pullman Square, an entertainment, restaurant and retail complex, as well as a number of eclectic shops and restaurants.