↓
Home→Holidays→Honoring veterans: not just for November 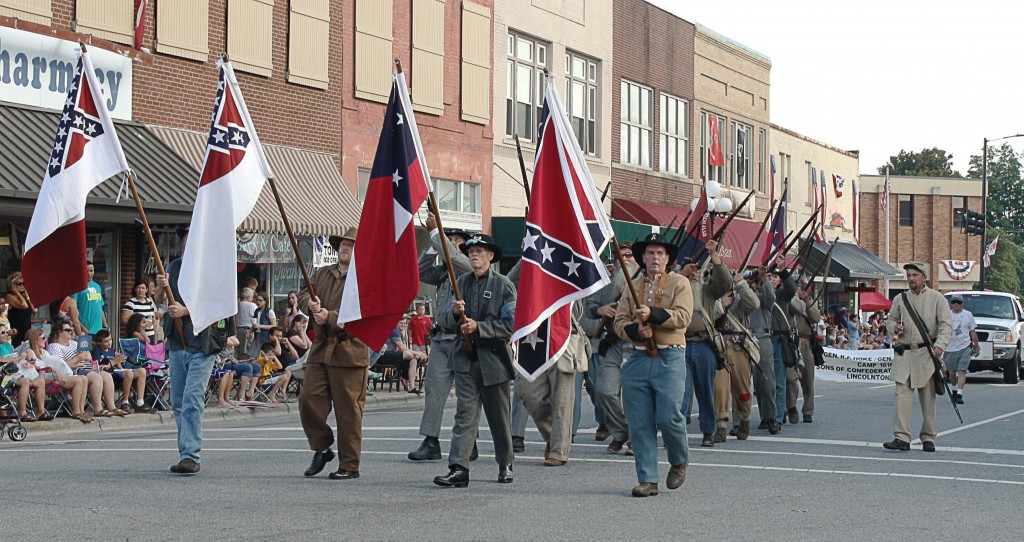 Commemorating its veterans of all wars is integral to the culture of Newton, N.C., where most of the third week in August is devoted to doing just that via a parade, several memorial services, music, races and much more. (Photo provided)

Proclamations, prayers and parades: Veterans Day observances rely on all three to demonstrate respect and appreciation for citizens who responded to the call of duty.

The biggest and longest-running celebration of the sacrifices of veterans probably happens in Newton, N.C.; not in November, though, but in August. During the entire third week of the month, 10,000–15,000 veterans, non-veterans and residents alike — more than the entire population of the city, which is about 13,000 — head downtown to engage in a buffet of meals, contests, memorial services and a parade that elevate veteran appreciation to the level of a popular festival.

According to American Legion Commander Ron Harris, the timing of the celebration — and its traditions — originated with the War Between the States.

Records show that of approximately 6,000 men in Catawba County pre-war, 2,106 enlisted and 632 were killed during four difficult years of fighting. That tremendous sacrifice earned them enduring honors.

“It made a big impact on the community. I think because so many people served and so many people were killed, support for the tradition carried over more,” Harris said.

After the war was over, men who lived in the county and had served in the war were told to report to the Catawba County courthouse in Newton, the county seat, during the third week of August 1868 to sign up for their pensions.

“The Confederate veterans and their survivors came in on wagons — about 2,000 of them. They got together on the courthouse lawn, and they had lunch, got their registration done and kind of had their parties,” he said. Each year the scene repeated. After the Spanish-American War, veterans from that conflict were included, then WWI veterans and so on.

The American Legion, Harris pointed out, was formed after WWI and designed to phase itself out after veterans of that war passed away. But then came WWII, then Vietnam, perpetuating its mission. The annual Newton veterans celebration was similarly inclusive. It came to be called the

Southern belles in the Soldiers Reunion Parade harken back to the tradition’s founding days, immediately after the Civil War or the War Between the States. (Photo provided)

Old Soldiers Reunion. Then years ago the name was changed to just the Soldiers Reunion.
It’s a source of pride for city leaders, Legionnaires and residents to tout that the event the largest non-holiday celebration of veterans in the U.S., and that the parade is the longest, most continuous parade in the country to honor veterans of all wars. The reunion is what Newton has come to be known for.

“This year was the 125th, and even more people came. During the parade they were six deep for miles, just watching,” Harris said. “It resonates very big with service members.”

“To me, I see that the city looks forward to it every year,” said Wayne Dellinger, who sits on the Newton city council. The city makes a relatively small investment toward the cause, which took the form of a $1,000 donation, portable restroom facilities, trash pickup and law enforcement responsibilities. But municipal support is growing as the local parks department sponsors more and more of the events, said Robert Powell, commercial development director for the city. 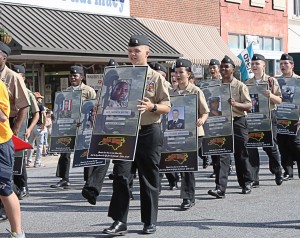 American Legion Post 16 has done its part to continue the tradition. However, eventually the scope of the observance and the tens of thousands of dollars required to bring it off required more than its 400 members could provide. Several years ago the Downtown Merchants Association, of which Dellinger is head, stepped in and now fundraises and organizes most of the week’s events, together with members of his own family. The Legion’s primary responsibility is for a free meal served to all veterans on Thursday. It also helps with the very long-running Old Soldiers Parade.

Over the last 125 years several nights of that week have been filled with band performances, from country to religious; a 5K; street parties; a baby contest; pet shows; a beauty contest; the parade; four or five memorial services with wreath placements; a bike race and a car show; and blocks lined with vendor booths. “The whole town is consumed by this for a week,” Harris said. “There are hundreds of organizations involved. Two hundred seventeen of them put floats in the parade.”

Residents’ pride in the reunion is also evident, he said, by the cleanup and beautification activities it prompts every spring. “It makes people spruce up because they know it’s a big event, and a lot of people come to town.” Many of those are former residents who have moved away, he noted. “But they come back for this.”