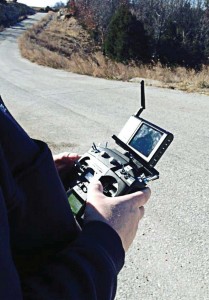 Regulations surrounding the use of Unmanned Aircraft Systems on the fire ground continue to evolve, so consult the FAA before purchasing a system intended for that purpose. (Photo provided)

Drones have gained attention recently due to their maneuverability, versatility and low operational cost in military applications. These qualities make drones desirable to public service agencies as well.

Fire departments, in particular, can benefit from this technology when it comes to assessment and management of fire ground operations. But obtaining permission to own and fly them is not a simple process. Many state and federal laws limit how this technology can be used.

Still, some firefighting professionals believe drones are worth the effort. One such advocate, Assistant Chief Bruce Bjorge of the Western Taney County Fire District in Branson, Mo., has insight into how drones might be applied in the field and the regulations that departments should be aware of before committing to this technology.

Bjorge has logged over 500 hours of flight time and is confident of the advantages that a drone, or Unmanned Aircraft System, presents to fire crews.

“I think this technology can give incident commanders an initial situational awareness of the size, scope and magnitude of the emergency — whatever the type — faster. With a better operational picture, they have the ability to request the right resources and the right resource levels based on better intelligence.” This can lead to a better managed incident with the potential to save lives and property, he added. “The ability to monitor the scene from overhead and identify potential safety issues and correct them before responders are injured and killed can be an invaluable tool for anyone in public safety.”

This improved awareness doesn’t apply just to structure fires. Natural disasters, search and rescue missions, highway crashes and hazardous material situations are some of the circumstances in which quick drone deployment is useful. Light weight and small, drones can be taken to nearly any scene and launched immediately, providing aerial surveillance much more quickly and inexpensively than full-sized aircraft and making this kind of intelligence accessible to agencies of any size.

While Bjorge points out the benefits of drones, he does have reservations. “I’m concerned that the fire service as an industry may want to get involved in using the technology and may accidentally violate FAA regulations by purchasing this technology before they fully understand the limitations of their use.”

Public agencies that want to own and operate drones must apply to the Federal Aviation Administration for a certificate of waiver or authorization. The permit application seeks information pertaining to aircraft identification, airworthiness, purpose of use and intended flight area. A COA is normally issued for a two-year period and limits UAS operators to a defined section of airspace, often prohibiting flights over densely populated areas. It requires drones to be flown under visual flight rules and calls for a visual observer to assist the operator in constantly keeping the drone within sight. 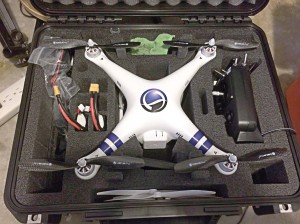 Assistant Chief Bruce Bjorge of the Western Taney County Fire District in Branson, Mo., volunteers his DJI Phantom 1 quadcopter for use by the department. (Photo provided)

Many COAs require an operator to coordinate with an air traffic control facility and may require a transponder to be installed on the drone. This application process can take anywhere from two months to a year to complete.

However, these federal restrictions apply to departments that own their drones. Bjorge explained how a department could also use a drone without going through the FAA’s permit process.
“A loophole that currently exists is for these agencies to have an agreement with a group or individual who owns the technology and is willing to allow these agencies access to the video footage during an incident.” This use of drones must comply with model aircraft guidelines, which do not require a permit from the FAA. Rules for hobbyists resemble some of the COA restrictions but require a drone to be flown below an altitude of 400 feet.

It’s important to note that the FAA currently prohibits flying drones for compensation. Bjorge offers his drone to his department on a volunteer basis.

“I have made it known to my local fire district that I own a drone and have provided a brief demonstration for our fire chief for informational purposes and to allow him to understand the capabilities of the craft. To date, we have used it in training but not on an actual emergency scene.”

While a loophole currently exists at the federal level, several states have been closing it through their own legislation. State and local laws concerning drones are constantly being introduced or updated.

According to Bjorge, many within the industry and outside it feel that once the FAA comes out with an official program for UAS operation, both commercial and privately, much of the confusion will clear up. Until then everyone just needs to be proactive with local, state and federal regulations, and make sure that if they operate these systems, they do so in compliance with any applicable laws, he suggested. Bjorge also has several important suggestions for any department considering drone technology. First, he recommends researching the market. 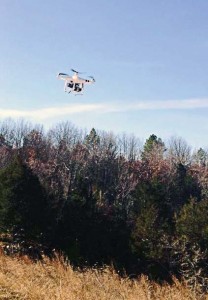 Drones can be an aid to firefighting units due to their maneuverability and ability to provide information on the intensity and range of a fire. Public agencies interested in the technology must apply to the FAA for a certificate of waiver or authorization. (Photo provided)

“The available systems for purchase are very diverse. Be sure to research different manufacturers, options from the manufacturer, aftermarket options and specifically what kinds of batteries and flight times are available,” he said. “Differences from one manufacturer to another can make a big difference in your UAS meeting your expectations in the field.” An agency should also let the public know if it will be using a drone.

“These systems can cause concern politically from the public. If you decide to purchase a UAS, don’t keep it a secret. Be very clear about what was purchased, what it will be used for and, more importantly, what it won’t do. This will help prevent public distrust and keep the general public at ease.”

Finally, make sure it is fully compliant with all relevant regulations before purchasing a drone system. A department might buy a drone, thinking that it can take advantage of a loophole, but by the time it goes to deploy a drone to an incident, that loophole may no longer be effective.

“This is probably the most dynamic aspect of UAS ownership and operation,” said Bjorge. “The rules for UAS operations will continue to change rapidly, and it is the responsibility of the operator of UAS to stay informed and continue to comply with operating rules and regulations.”

To apply for a certificate of waiver or authorization to use a volunteer’s drone, visit the FAA website www.faa.gov/about/office_org/headquarters_offices/ato/service_units/systemops/aaim/organizations/uas/coa/