Infrared asphalt repair, though gaining in popularity, may still be one of the road maintenance industry’s best-kept secrets.

Its benefits are legion, but state and local governments aren’t catching on fast enough, according to Roger Filion, owner of Kasi Infrared.

“Somebody’s got to pull the trigger and say, ‘We’re spending all this money on cold patch and just throwing asphalt away when we could be out there making the repair permanent. If they want to save the town taxpayers’ money, this is it.”

According to a March 15 Fox News report, the technology is in high demand in Europe and Asia. Many street commissioners say it saves money, uses less labor and equipment and is even green.
Infrared repair has one-seventh the carbon footprint of a traditional repair and permanently fixes potholes.

The science behind it is basic; but by all accounts, the process is quite effective. It involves heating the damaged area; raking the hot asphalt to remove clumps; mixing it with additional, often recycled material; and smoothing and rolling the resultant patch.

Company reps and street department personnel seem to concur that a typical 5-foot-square patch can be completed in Works about 20 minutes, usually with a crew of two or three workers. Estimates vary, but the infrared process may slash labor and material costs by as much as two-thirds.

Of course, start-up costs have to be figured into the equation. A full set of infrared repair equipment, including transport vehicle, can cost around $150,000. The infrared heating unit itself can run from less than $10,000 to more than $50,000 depending on the size of the heating panel and whether the machine is purchased new or used.

Mark Jones, streets superintendent for Traverse City, Mich., bought one four years ago and has never looked back.

The city’s first infrared heater, purchased in 2006, was a 4-foot-square unit quickly deemed inadequate to address the myriad potholes caused by the brutal northern winters on the municipality’s more than 100 miles of local streets, 12 miles of state highway and 20 miles of alleys. So in 2010 the city acquired a 6-by-8 heating panel for just under $17,000.

The process requires minimal training. First, the area is cleared of all dirt, debris, loose asphalt and standing water. The infrared panel is placed over the area to be repaired, including at least a 3-inch perimeter of adjacent undamaged asphalt. After approximately eight to 10 minutes, the area heats up to 300–325 degrees and to a depth of 1–3 inches; although a couple of extra minutes are sometimes needed if the ambient temperature is significantly low. 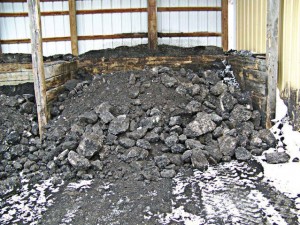 The infrared machine is lifted and, if necessary, repositioned for the next repair, and work commences on the hole. The material is raked throughout its heated depth, with the edges of the repair area framed for an aesthetic look. Any contaminated material is removed.

A rejuvenator is spayed onto the raked area to restore the depleted oils of the existing asphalt, enhancing its adherent quality. Then new or recycled asphalt is added as necessary to fill the hole and level it to about one-quarter inch above the existing grade.

The area is then compacted, edges first, with a vibratory roller or plate. Another dose of rejuvenator is applied, and the area can be opened immediately to straight drive-over traffic. Areas involving vehicle stopping or turning should be further cooled before traffic access, however.
Jones cited a particularly troublesome stretch of pavement along Barlow Street, where the process was used.

“We couldn’t keep the street patched,” he said. “Before the day was out, the potholes we had just filled needed to be patched again. We were out there every day for a while. But we infrared repaired it and never went back.”

Jones explained the permanency of the technique. “There was no more water penetration because we heated up the existing asphalt and blended it with the new material,” making a seamless patch impervious to the freezing moisture that causes potholes in the first place.

Traverse City recently purchased a recycler that can convert two tons of used asphalt to “like new” patching material in 20 minutes. That’s enough for a full day’s work, according to Jones.
He figures the $76,000 outlay is worth it. This year, the department has used 500 tons of asphalt since spring. “We’ll save enough on materials to pay for the unit in three years.”

Purchasing infrared asphalt equipment is, of course, a decision made case by case by the municipalities’ financial gatekeepers, but some considerations on the matter include: