No matter where you are when a physical emergency happens, help is usually just a few minutes away.

For the 40th year, the American College of Emergency Physicians has coordinated an effort to bring to the public consciousness the dedication and determination of those who arrive on the scene for the sole purpose of saving a life.

The ACEP publishes an EMS Week Guide each year in EMS magazine. In fact, the ACEP played a key role in establishing the week back in 1973, with the cooperation and support of President Gerald Ford. At the time, emsweek.org said, “EMS was still in its infancy … with organized systems of care and the concept of EMTs and paramedics just starting to take root in diverse spots around the country.” 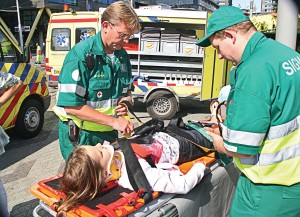 Forty years later, the Affordable Care Act stands poised to overhaul the job description. But regardless of how, exactly, it changes, and whether it’s called emergency medial service or something else, no one’s suggesting that EMS will continue to be anything less than a critical component of emergency response.

Dr. Alex Rosenau, president of the acep, said that EMS has become increasingly important to the coordinated treatment of trauma and getting patients to predesignated trauma centers quickly.
“EMS is critical to the chain of survival for sudden cardiac arrest. We’ve given medics more resources, a wide variety of medications, increasingly better training and we are even looking forward to a future where they may be participating in some outpatient care in medical surveillance for things like congestive heart failure. By providing definitive patient care in the field, EMS improves our ability in the emergency department to extend care to where it’s needed.”

The average resident of your area probably goes years without experiencing the type of incident that would remind them how valuable a well-trained, funded and supplied EMS is: so increasing awareness by scheduling EMS Week events is not only timely, but also serves to increase public affection — a valuable tool in fighting budget pressure from above.

The National EMS Week Facebook page becomes more active every year and features examples of how departments across the country are participating, said acep Public Relations Manager Julie Lloyd. Even if you haven’t started planning yet, there are things you can still do. Another source is emsweekideas.com, a site sponsored by the National Association of EMTs. Next year, acep plans an expansion of EMS Week that will include direct collaboration with multiple organizations, including NAEMT, and sponsors; and an expansion of its footprint through PSAs, announcements and articles.