Water is inexpensive in the U.S.,” said Jerome Devillers, head of water infrastructure and project financing at WeiserMazars LLP, an accounting, tax and advisory services firm in New York. “(But) of course, you’re paying for the service … not the water itself.”

Who provides that service has been changing nationwide as outdated water lines and inefficient service lead cities to consider the consolidation or privatization of utilities.

In one of many recent utility takeovers of or by municipalities, Aqua Indiana recently announced that a letter of intent has been signed, allowing the city of Fort Wayne, Ind., to buy Aqua’s southwest city utility. Aqua’s services were unable to meet the demands of Fort Wayne residents, and the purchase followed an announcement earlier in the year by Mayor Tom Henry that the city would move forward to condemn that facility.

According to Gabe Diederich, research analyst for Wells Fargo’s municipal funds, the consolidation or takeover of utilities is indeed a trend. He attributes this in large part to the high cost of operating water and sewer services. The idea, Diederich said, is that if the utility is larger, then the consumer pays less. Larger companies tend to be more stable and have a higher level of sophistication in their management. This usually leads to debt being repaid in a timely fashion, something desirable to investors. Diederich sees consolidation and aggregation as “likely to continue.”

After years of working on resolving water supply issues with Aqua Indiana, Mayor Henry said in a press release that the purchase of Aqua Indiana’s facilities was a tremendous step forward as the city works collaboratively to serve residents with reliable and high-quality water at an affordable price.

“This is a win for our community. Our efforts in the north have already reaped over $10 million in savings for residents over the past five years, and this effort in the southwest will save residents over $2 million annually as a result of lower rates and reduced or avoided expenses in water softening,” he pointed out. “This partnership will enhance our quality of life and position Fort Wayne for future growth and success.”

Aqua Indiana President Tom Bruns responded: “We’re particularly happy that the proposed agreement offers the opportunity for Aqua and the city to work together on utility issues in southwest Allen County. By working together on water and wastewater issues, we believe we have set the stage for continued growth and economic development.”

What’s likely to be more important to the area’s 12,600 customers is that they will not see water rate increases as a result of the purchase. In fact, those rates were originally projected to be less with an early estimate saying customers could save between $160–$220 annually. 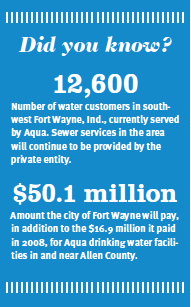 Fort Wayne will pay $50.1 million to Aqua, in addition to the $16.9 million it paid in 2008: for a total cost of $67 million for Aqua’s drinking water facilities in and near Allen County.

Another benefit of the purchase is that most customers won’t have to use water softeners, saving them potentially $10–$20 a month. Pre-softened water also protects any appliances that use water, such as dishwashers, washing machines and ice makers, extending their lives.

As soon as the city council and Indiana Utility Regulatory Committee approve the closing in the first quarter of 2014, former Aqua customers will begin receiving city water within days. Some customers may not be transitioned right away, but it’s not expected to be longer than a year before all are supplied by the city.

WeiserMazars’ U.S. Water Industry Outlook survey, released last year, said that 71 percent of those who responded believed there would be “significant consolidation in the next five years through acquisitions of smaller utilities by larger investor-owned utilities.” Those same respondents believed that the fragmented nature of the water industry negatively impacted not only customer service but “the ability to raise capital for infrastructure upgrades.”

“The water industry has attracted a lot of private capital during the past few years because of its stability relative to other investment opportunities,” he added. “Our study shows the time is ripe for consolidation to take place.”

However, Devillers said, “While we do see consolidations of municipalities or private companies, there is still a limited number of transactions.” He cites budget concerns and the difficulty in meeting regulatory demands as two reasons that they haven’t seen quite as much consolidation as they had expected.