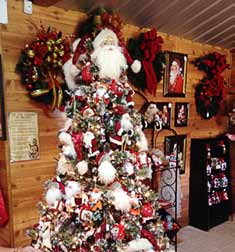 This month, more than a few parents will tell their children that one of the holiday’s most famous personalities is at the North Pole making toys and checking a list to see who was naughty and who was nice. But ask a resident of Lyons, Ga., where Santa Claus is, and they’ll point down the road. They might even add, “about a mile out of town on Route 4.”

During the early 1900s Santa Claus, Ga., was a pecan-growing region. According to the story, one particular pecan farmer supplemented his income selling nuts and toys to tourists en route to the Sunshine State. When the town moved to incorporate in 1941, he wanted the locale to have a name those tourists would easily remember.

Mayor Al Lewis has a finger on the pulse of his unusually-named jurisdiction. He’s researched the moniker and concluded that Georgia and Indiana are the only two states in the nation with towns that sport the name of the jolly old elf.

Both he and his constituents embrace the responsibility that come with the name. The approximately 170 residents of Santa Claus live on Rudolph Way, December Drive and Dancer and Prancer streets, among others. Drivers who visit city hall park their vehicles between the candy cane-striped lines in the parking lot.

On Christmas Eve, sand is trucked into the downtown. Municipal employees use it to fill small paper bags, which are delivered to the curb of homes on several streets as part of a long-standing local tradition. At dusk, residents light the candle in the bag that’s in front of their home.

“If there’s one thing I’ve learned since I’ve been mayor, it’s that Santa Claus belongs to everybody,” Lewis said. “Tons of people ride through the area. We’ve been very blessed that people do come and enjoy this.”

In fact, that realization set Lewis’ agenda. Since taking office in 2011 he has overseen the construction of a welcome center, historical museum and gift shop, plus a 4,200-foot community center where a public Christmas party takes place. This year, six-foot-tall Santa statues were erected at two of the entrances to town from SR 1/SR 4. A tree-decorating event, where residents came together to sing carols, happened on Nov. 29. Then the 2013 Christmas parade will take place on Dec. 7. Some local funds are tapped to help with expenses, including local option sales tax and special purpose local option sales tax revenues.

Lewis added that the town receives about 30-50 emails a year about how proud they are of the way in which Santa Claus — the town — observes its namesake holiday.

“My goal was to get Santa Claus back on the map and make it a place people would want to visit,” he said in October. “I’ve lived here 33 years, and I’ve always wanted to see it like this again.”

On the southern edge of Seminole Ranch Conservation Area, between Orlando and Titusville, Fla., is another area that evokes the holiday theme. The unincorporated town of Fort Christmas, Fla., can be accessed from Orlando on US 50; but it seems more appropriate to come at it from the north on US 420, which is also called Fort Christmas Road.

At Fort Christmas the name is more of a historical marker than a reflection of holiday spirit. Almost 200 years ago U.S. Army soldiers and a group of Alabama volunteers arrived in the region and, on Dec. 25, 1837, began to construct a fort. Today a replica stands in its place, complete with exhibits and a video presentation on the Seminole Indian Wars.

According to lifelong resident Cecil Tucker, there was a time when so many of the municipalities requesting to establish a U.S. Post Office were named “Fort” something-or-other that it became standard procedure to drop the “Fort.” As a result, a post office opened in “Christmas,” Fla., in 1892. Today it receives some 20,000 pieces of mail per day between Thanksgiving and Dec. 25 from people seeking the postmark.

Those who travel in person to Christmas are rewarded year-round with the sight of a 25-foot-tall Cedar decked out from tip to trunk. A generation ago it was Tucker’s mother who spearheaded the making of decorations for the conifer, which stands on the family’s property. Now it’s a community activity to meet each November, take down the decorations from last year, collect money to purchase new ones and schedule the lighting ceremony.

Such is the sentiment attached to the tradition that (and you have to keep this a secret!) the current Cedar Christmas tree isn’t the original.

“Every once in a while we get some vandalism. Once some kids even lit it on fire. Then I scramble and try to replace it so that visitors don’t notice. I don’t do it in the middle of the night, but it does get done pretty quick,” Tucker admitted.