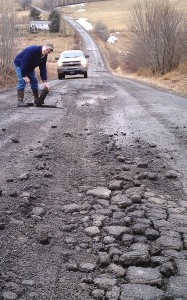 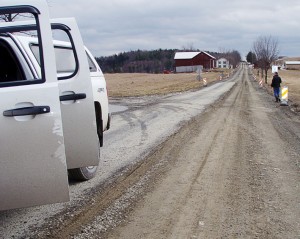 “Pie-crust” roads can be pounded back into gravel. With some supplemental aggregate this road could be and was actually graded. (Photo provided) 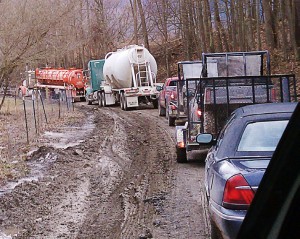 Above, left to right: This dead-end gravel township road in Pennsylvania historically had a traffic count of fewer than 30 vehicles per day — mostly cars and light agricultural equipment. This 20-minute-long traffic jam to reach the two-lane state road a quarter of a mile away took place after shale gas development came to the township. (Photo provided)

Which way would a blind Lady Justice’s scale tilt when weighing the benefits of shale energy development, with its high-volume hydraulic fracking, against rural road deterioration?

That’s the major balancing act that confronts state and local powers that be. It’s a polarizing decision, whether drilling for natural gas and oil is worth the resulting “pie-crust” country roads that develop from heavy trucks repeatedly carrying large loads of sand, water and equipment to each well.

The 73,000- to 80,000-pound load vehicles make thousands of trips through small towns and over rural roads not designed for this type of weight. These roads, which may only have 2 inches of asphalt over dirt, quickly “alligator” and deform, or deteriorate rapidly back to dirt roads.

In Pennsylvania the Marcellus Shale, a geological formation below three-fifths of the state, holds enough natural gas to supply the nation for more than a decade. The bedrock also runs through parts of NewYork; Ohio; Maryland; West Virginia; New Jersey; Kentucky; Tennessee; and into Canada.

“The continued growth of the natural gas industry in Pennsylvania has proven to be very beneficial to our state’s economy,” said Jamie Legenos, information specialist with the Pennsylvania Department of Transportation. “It has also presented many opportunities to face resulting infrastructure challenges head-on.” PennDOT and its local and municipal partners have worked to adapt to the changing use of secondary, rural roads in Pennsylvania.

With the enactment of Act 13 in February 2012, the shale industry was required to pay impact fees on producing wells, Legenos noted. Fees collected for 2011 impacts amounted to more than $200 million. The monies are distributed to county and local governments for their use, in accordance with the act.

“The intention is that some money would be invested back into the county and local infrastructure, thereby helping residents and the industries working and living in the shale areas,” he said. “To put things in perspective, on a state level an estimated $600 million per year over the next 10 years would be needed to reconstruct all state-owned weight-posted roads alone.”

If a small town is facing road deterioration by haulers — whether because of fracking or other heavy industry traffic — the state DOT would first perform an engineering study to determine whether a weight restriction needs to be posted.

“If a company wishes to use heavy trucks or equipment on the posted road, they must enter into a maintenance agreement and bond the road,” said Legenos. “Every company using a posted road must share the cost of damage repairs.”

As part of maintenance agreements, a hauler is required to maintain the roadway to at least the condition it was before the industry’s use. Weight-posted roadways may see upgrades from the original conditions due to industry improvements.

In completing roadway repairs and upgrades, companies may take a proactive or reactionary approach.

“For example, some companies will assess that a roadway will not be suitable prior to hauling and will upgrade it to ensure that the roadway can adequately handle the increased traffic without deterioration. Other companies may address roadway damage in the middle of their activities, or once the development has finished.”

According to Tim Ziegler, field operations specialist at the Larson Transportation Institute/Center for Dirt and Gravel Road Studies of Pennsylvania, drilling companies and their contractors do repairs in the majority of Pennsylvania’s municipalities; and the repaired roads are generally better than the road was prior to oil and gas development.

“While there are oversized/overweight loads, such as the movement of drilling rigs, most trucks used to develop unconventional oil and gas wells are 20 tons or less here in Pennsylvania. It’s the number of trucks required and the year-round nature of the industry that plays havoc on the roads,” said Ziegler.

New materials and technologies are being used to increase the load-bearing ratio. These techniques include full-depth reclamation, chemical stabilization and the use of geogrids and geotextiles, in addition to basic road base reinforcement, which uses locally obtained stone. The more advanced companies are regarding incorporating drainage improvements into their construction and reconstruction plans, the more it helps. Some companies are also considering options to reduce the volume of trucks required to bring a well online.

Solutions that would ease the heavy traffic include using the latest available technologies to reduce truck volume on the roads — technology such as flowback recycling or frack water piping.

“Remember the three most important words in road maintenance: drainage, drainage, drainage — and have companies and contractors include people with knowledge of the locality when designing roads and formulating maintenance plans,” Ziegler said. Municipalities and drilling companies should also work together from the start to meet the goals of both.

“In regions and municipalities with economic interests based on outdoor recreation and tourism, as well as quality-of-life concerns that are anchored in a rural lifestyle, avoid over-building new and existing road infrastructure,” Ziegler advised. “Design roads and the road network to be safe and to support the traffic loads, but avoid over-widening, over-clearing and over-emphasis of one resource at the expense of others.”