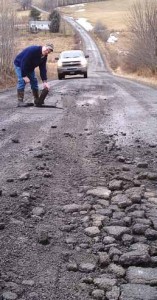 Which way would a blind Lady Justice’s scale tilt when weighing the benefits of shale energy development with high-volume hydraulic fracking against rural road deterioration?

That’s the major balancing act that confronts states’ powers-that-be when deciding whether drilling for natural gas and oil is worth the resulting “pie crust” country roads that develop from heavy trucks repeatedly carrying large loads of sand, water and equipment to each well.

The 73,000- to 80,000-pound load vehicles make thousands of trips through small towns and over rural roads that were not designed for this type of weight. Roads, which may only have 2 inches of asphalt over dirt, quickly “alligator” and deform, or deteriorate rapidly back to dirt roads.

If a small town is facing possible road deterioration by haulers — whether for fracking or other heavy industry traffic — state departments of transportation will first perform an engineering study to determine whether a weight restriction needs to be posted.

Kentucky is no stranger to heavy or oversize, such as coal trucks, gravel trucks and heavy equipment transporters, said Chuck Wolfe, executive director of the Office of Public Affairs in Kentucky.

The construction, maintenance and repair of state-maintained routes in Kentucky take place within a master plan — the Kentucky highway plan. Every two years an updated Highway Plan with a six-year horizon is submitted to the Legislature for enactment.

As one specific example of response to heavy trucks, the Kentucky Transportation Cabinet this year undertook a number of intersection reconstruction projects, in which asphalt traffic lanes were taken up and rebuilt with concrete. These were in areas with a lot of heavy truck traffic.

“For example, two of the intersections were here in Frankfort, near a large quarry from which large gravel trucks go back and forth day and night. Intersections are particularly susceptible to damage when trucks have to sit at red lights or hit the brakes for a red light, which over time can cause asphalt to wrinkle and crumble. Concrete can better handle the load,” Wolfe said.

Other solutions include using more advanced road construction materials; employing proper drainage for good road maintenance; avoiding over-building new and existing road infrastructure; and creating a municipal/drilling partnership at the very beginning of the operation. Also, reducing truck volume by using flowback recycling helps, as does working with companies that use the latest technological advances in fracking. 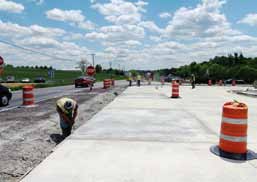 The depiction above is part of a Kentucky project and shows the best practice of using concrete at signalized intersections to prevent the rutting and “washboarding” that occurs when heavy vehicles stop or sit for prolonged periods. (Photo provided)

Not all states are involved in fracking. According to David Spear, press secretary of the Georgia Department of Transportation, there is no significant level of oil or gas drilling in Georgia; thus, fracking impacts are non-existent.

“But like all states, though, we are impacted by increasing truck weights and traffic and constantly struggle to maintain acceptable pavement conditions,” said Spear.

In Pennsylvania the Marcellus Shale, a natural gas-rich geological formation below three-fifths of the state, holds enough gas to provide our nation with gas for more than a decade. The bedrock also runs through parts of New York; Ohio; Maryland; West Virginia; New Jersey; Kentucky; Tennessee; and into Canada.

“The continued growth of the natural gas industry in Pennsylvania has proven to be very beneficial to our state’s economy,” said Jamie Legenos, information specialist of the Pennsylvania Department of Transportation Press Office.

“It has also presented many opportunities to face resulting infrastructure challenges head-on,” he said. PennDOT and its local and municipal partners have worked to adapt to the changing use of secondary, rural roads in Pennsylvania to meet growing needs. 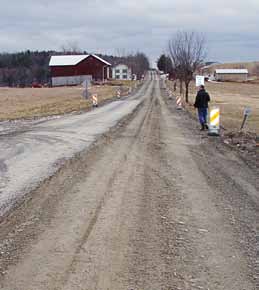 “Pie-crust” roads can be pounded back into gravel. With some supplemental aggregate this road could be, and was, actually graded. (Photo provided)

“With enactment of Act 13 in February 2012, the shale industry is required to pay impact fees on producing wells,” Legenos noted. The fees collected for 2011 impacts amounted to more than $200 million, and a similar amount is expected for 2012. The monies are distributed to the county and local governments for use in accordance with Act 13.” The intention is that some money would be invested back into the county/local infrastructure, thereby helping residents and the industries working and living in the shale areas. “To put things in perspective on a state level, an estimated $600 million per year over the next 10 years would be needed to reconstruct all state-owned weight-posted roads alone.”