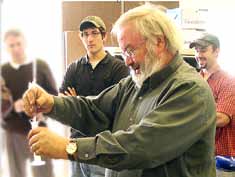 Another method of testing biodiesel fuel is the 3/27 test to gauge the quantity of glycerides — unconverted feedstock — that might be present in the fuel. The photo shows Rich Cregar checking a sample for glycerin for two of his biofuel technology
students, Robert Harkins and Richard Sosnowski. (Photo provided)

Biodiesel fuels are diesel fuels that are animal fat or vegetable oil based. After production, they are chemically combined with methane alcohol to produce fatty acid esters, which can then be burned. Without the proper chemical reaction, glycerine, which is stripped out of the original product during the reaction, can cause sludge and other damage to the engine of a vehicle.

“Biodiesel’s got its issues,” Marc Dreyfors, owner of one of the nation’s only public transportation companies that runs on biodiesel fuel, Greenway Transit in Durham, N.C., said. “When you make biodiesel from animal or human food products like soybean, you are inadvertently raising the price of food and that’s not a good thing — but if you’re making your own fuel, the money stays here and that has an enormous impact on the economy.”

Saturated fats are, by far, the best for engine usage. They also last longer due to less holes in the chemical compound to allow for oxygen to react with it. And they are cheaper. In a perfect world, saturated fats would be the fuel of choice. But saturated fats also have a very high gelling point, about 40 degrees (50 degrees for animal fat-based). The majority of the country will see temperatures below that at some point every winter. When it happens, any vehicle, including fleets, will be completely useless until the gel melts back into usable fuel.

“There is incentive in the industry to produce saturated fuel — and that’s great, except in cold weather. It basically turns to wax,” Rich Cregar, department head for the Advanced Transportation Technologies at Wilson Community College, said. “If you have saturated fuel, you’re going to have to keep your fuel warm. Once the engine is running on the equipment, it will keep it warm.”

On the other hand, unsaturated (polyunsaturated and monounsaturated) fats are more expensive, plus become oxidized and acidic faster; however, unsaturated fats, with a freezing point of around 20 degrees, may actually retain their medium in the wake of cold weather.

Either way, there will be times when fleet managers may have to do some testing, and those times are likely in the winter.

“The fleet manager needs to know what his biodiesel is made of,” Cregar explained.

With fossil fuels, which contained 107 different compounds, the differences were so minute that they didn’t matter. Biodiesel has a much simpler chemical composition, so a slight change in the makeup can result in a big change in usage. It’s not that it’s a big secret. Producers simply aren’t used to telling and buyers aren’t used to asking.

“Once their supplier knows that they’re going to want to know, of course, they’ll start supplying it, but this is kind of new ground for companies to spread,” said Cregar.

Using a small amount of fossil fuel in the biodiesel mixture can actually help in a lot of ways. First, it’ll last longer. Since fossil fuels have had 300 million years to oxidize, react and become what they are today, the odds of a massive reaction making them acidic are pretty slim. Biodiesel fuel, on the other hand, sits for about five months to a year, and chemical reactions are much more likely. In fact, biodiesel fuels not mixed with petroleum should be stored in airtight facilities and used quickly to prevent oxidization since acids can cause engine damage.

“The most important thing a fleet manager can do if you’re storing your fuel on-site (is) purge the area with c20 or Argon,” Cregar said.

Dreyfors added that when purging, managers should get a test sample of the purged area and check for water or rust in a jar. Purge the tank once per year.

The second reason to mix fuels? The result will survive cold weather. Petroleum has a freezing point of around negative 5 degrees, but with recent chemical alterations, it now freezes at around 10 degrees. Either way, it’s a far cry from the 40-degree gelling point of saturated fuel. 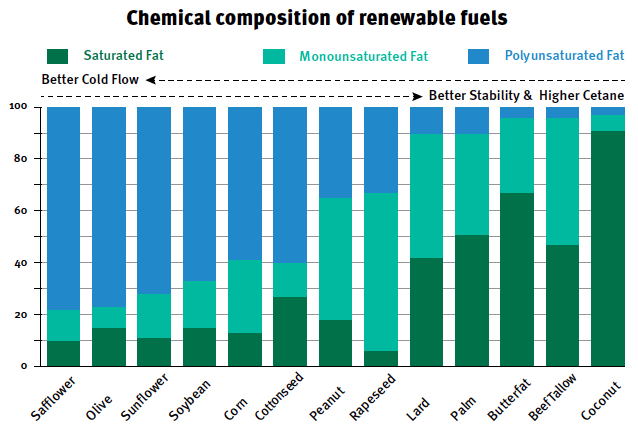 Different oils benefit varying situations. Coconut oil, for example, as a highly saturated fat, provides better stability and is a better fuel that is longer lasting, but will gel at a higher temperature. Safflower oil, on the other hand, as a polyunsaturated fat, becomes acidic faster and doesn’t work as well as a fuel, but gels at a much lower temperature. The chart provides more information on the stability, cold flow and cetane levels of different fats used to create biodiesel fuels. (Photo provided)

“In the summertime, you can run a high percentage of biodiesel because it’s warm,” Cregar said. “Another strategy in the wintertime is, you can blend it. By blending petroleum, it’ll keep lowering the gel-point.”

The industry standard is B20, i.e., 20 percent of the blend is biodiesel and 80 percent is still petroleum. B99, however, exists as a more whole biodiesel fuel at 99 percent biodiesel fuel, in order for companies to qualify for the excise tax.

Fleet managers can purchase fuel premixed or mix it themselves; however, Cregar urges that if fleet managers choose to mix fuels themselves, they do it as soon as possible to lengthen the life of the mixed fuel.

Cregar recommends, when mixing the fuels, that a sample batch is taken each time new fuel is added to the tanker. Keep it in a jar and use it as a reference.

“When you’re fueling, if you can see through the jar, go ahead and fuel. If it’s cloudy, don’t use it because it’s turning into wax.”

In cold weather, keeping biodiesel fuel from gelling can be difficult. Companies are finding new ways to make vehicles winter-ready. Purchasing a biodiesel copper coil heater kit, which hooks up to either end of the filter, may alleviate the problem for many cities.

Once the vehicle heats up, the fuel will return to normal, but until then, preparedness is important, especially when faced with an emergency.

Many community colleges offer comprehensive training on biodiesel fuel. Programs range from condensed four-hour courses to four-day conferences, with two-day seminars being the norm. Cregar himself offers training and seminars through Wilson Community College for municipalities across the country.

For information on biodiesel training classes in your area, contact the Automotive Training Authority at (800) 575–4282.