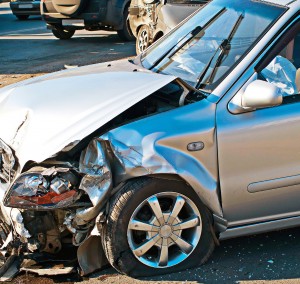 What you see in the aftermath of any vehicle accident is actually evidence of how much kinetic energy was left in the vehicle at the time of a crash. The bigger the vehicle and the faster it’s traveling, the more crush damage it will sustain. (Shutterstock photo)

This is the second in a series of articles on the prevention of emergency vehicle crashes.

Any moving vehicle has kinetic energy, which is a function of how fast it’s traveling and how large it is. Take a 30,000-pound fire truck traveling at 50 mph and imagine the amount of energy that’s associated with it as it weaves through rush hour traffic. It is this energy that causes tires to skid, metal to crush and, at times, injury and death.

STOPPING: As a vehicle travels down the road, it gathers kinetic energy. In order for a driver to bring a vehicle to a stop, he must first find a way to dissipate that energy.

SKIDDING: Normally, the friction of brake pads rubbing on discs or drums will “burn off” a vehicle’s kinetic energy and bring it to a stop. But what happens when a car pulls out in front of your vehicle and you have to slam on the brakes, causing the wheels to lock?

In this case, the wheels stop turning and brake pads no longer rub on the discs or drums. As a result, the vehicle must find another way to burn off the energy so it can come to stop. How does this occur? As the locked tires slide across the roadway, friction between the tire and the road surface creates the heat, which burns off the kinetic energy.

The problem with this scenario is that as the tire slides across the road surface, it creates tremendous amounts of heat. While there is a lot of discussion in the crash reconstruction world as to what a skid mark is, one of the more commonly held beliefs is that the heat from a skidding tire liquefies the oils in an asphalt roadway and causes them to float to the surface. As they do, the vehicle begins to slide on a thin sheen of oil with no steering control. Some of the skid mark is also created by the rubber from the tire.

The take-home message is that once your vehicle begins to skid, unless it’s equipped with anti-lock brakes you will lose all steering control. If you’re lucky, the vehicle will skid in a straight line and eventually come to a stop once it burns off all the kinetic energy. If you aren’t lucky, it may slide into a fixed object or another vehicle on the road. 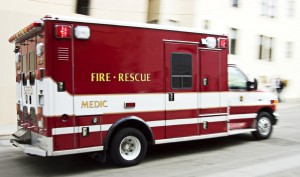 An ambulance traveling at 50 mph possesses a large amount of kinetic energy. It is this energy that causes tires to skid and metal to crush during an accident.

CRUSH: Ideally, any kinetic energy will be burned off by applying the brakes, and you will come to a stop. Or you may slam on your brakes and lock your tires, causing your vehicle to skid to a stop. But what happens if you aren’t able to burn off all of your energy before another car pulls out in front of you? In that case, you will strike the other vehicle. The remaining energy is dissipated by crushing the metal of the vehicles.

What you see in the aftermath of a motor vehicle crash is actually evidence of how much kinetic energy was left in the vehicles at the time of the crash. The bigger the vehicle and the faster it’s traveling, the more crush damage the vehicles will sustain. Drivers must understand how the size and weight of their vehicles, in conjunction with the speed they are traveling, directly affects the amount of energy that must dissipate to bring a vehicles to a safe stop.