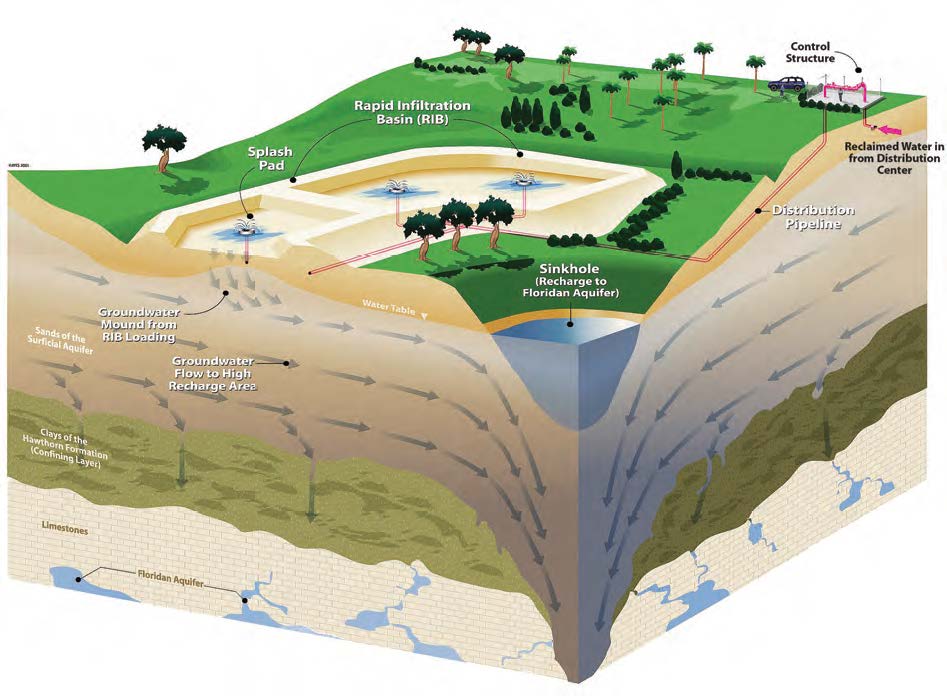 Pictured is the cross section of a Rapid Infiltration Basin. (Photo provided)

Water Conserv II, the largest reuse project of its kind in the world, began 27 years ago through a partnership between Orange County, Fla., and the city of Orlando. Both were faced with a lawsuit that required them to find an alternate method of discharge for treated effluent that would prevent contamination of Shingle Creek and its receiving waters.

“The excess water not needed for irrigation or surplus water experienced during wet weather periods is distributed to the RIBs, which percolate it quickly through the soil as it makes its way to the Floridan Aquifer, Florida’s primary drinking water source. This is the ultimate form of recycling,” said Glenn Burden, operations chief for the engineering and environmental company Woodard and Curran. “We started out working with citrus growers, but our customer base has grown exponentially. We now wholesale water back to several local municipalities as well as Orange County for residential irrigation.”

Water Conserv II is also the first reuse project in Florida permitted by the Florida Department of Environmental Protection to irrigate crops produced for human consumption with reclaimed water. The project’s reclaimed water meets FDEP’s public access reuse standards and is permitted for use on all public access sites including residences, golf courses, citrus, foliage and landscape nurseries, tree farms, pasture land, the production of soil cement and fire protection. “What once was pushed into a creek to get rid of is now a clean valuable product for the community,” said Burden. “What used to be a liability is now an asset.” 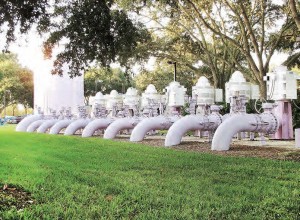 The benefits of the project are impressive, but Burden noted that conserving drinking water is the greatest benefit. “Water is one of our most important natural resources. Every gallon of water delivered to our customers is a gallon saved from being taken out of the Floridan Aquifer.”

Another benefit is that the steady stream of water provides freeze protection for citrus growers and an abundant supply during droughts.

Burden’s advice to other communities interested in adopting this type of project? 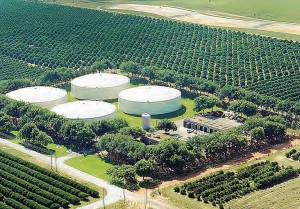 An aerial view of the Water Conserv II Distribution Center. Citrus Groves and RIB Site 3 are visible in the background.
(Photo provided)

“The geology must be studied carefully in the area where RIBs will be installed and requires a substantial amount of land. This is one of the most important factors to building a successful RIB site,” he said.

Burden also stressed the importance of partnerships. “The city and county found themselves in the same situation and combined their resources. They also utilized experts in the field, such as the state health department, to establish constituent limits as well as the research arm of the University of Florida. They utilized grants from the federal government to help get the project off the ground.”