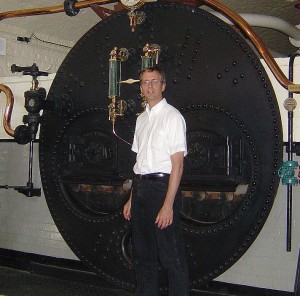 Richard Grove is the finance director for Lower Allen Township, Pa., and has been in government finance for about 30 years. After working in several parts of the country, he returned to his home state because of its familiar environment and social support structure. Grove appreciates the wide range of benefits the area offers.

“(Nearby) Harrisburg is a small city, but there are also four large cities with populations over 1 million that can be accessed by day trips. Pennsylvania has many acres of woods, and there are numerous fishing spots and backpacking trails within an hour’s drive,” he said. “The four seasons run almost exactly three months each, so any type of outdoor activity is never more than a brief wait away.”

From a financial standpoint, Grove appreciates the state’s economy. “It’s comforting that Pennsylvania has a strong and varied agricultural economy, with plenty of coal and oil reserves, all the basic heavy industries and with every possible transportation network to deliver it all,” he said. “I always plan for the worst scenario but hope for the best. I guess I got that from my parents, who had to struggle to survive the Depression and World War II.”

When did you first realize you wanted to work in this field?

When I was a junior in high school. I cut grass in my small hometown of Lemoyne, Pa. I knew the city manager and became interested in the idea of working for local government.

Why did you get involved in public service?

This career has allowed me to chart my own destiny. I came in and learned everything I could when I began. Now I am at a point where I teach classes and write articles as a finance professional. This field allows you to get jobs anywhere in the country, and I did. I’m back home now, but I have lived other places that my career has taken me.

What are some of the major challenges in local government finance today?

One problem that many cities face is lack of long-term goals from elected officials. This is not the case in my town, but I think nationally it is an issue. It’s often tough to get people to run for office and stay on board long term for one reason or another.

Having long-term financial goals are important in government, just as they are in your home life. If you know you want to buy a home, you need to save money. If you have children, you have to plan ahead for college tuition. The same goes for local government. If you want pensions funded, it is better to save early. If you want to keep your debt low, you need to have cash on hand for unforeseen events and big expenses in the future instead of waiting until the day arrives and wondering how you are going to pay for it.

With the country coming out of the recession, how is your city faring?

Our town’s financial state is slightly above average since the recession hit. Our close proximity to Harrisburg, the capital, has helped. The largest employer there is state government, followed by federal government, and that is followed by industries that don’t fluctuate much in the economy, such as hospitals. Because of this, we enjoy a stable economy. Although this recession didn’t have as big an impact on us as it did other places, it did hurt more than anything I’ve ever seen in my life.

Do you see any trends that have emerged in municipal finance over the past few years?

There is a group of older people in this profession that, like myself, are baby boomers. We’ve known each other for years and see each other at conferences. People are starting to retire now. We’ve seen that what is coming after us is different. Not necessarily worse, just different. My generation tended to go into one profession, strive to excel and stay on that path. You don’t see that as much with younger people. You see them at professional gatherings for a few years, and then you never see them again. I’m not quite sure what that means for the government finance profession, but I think whoever is running the municipalities needs to give that some thought.

Would you encourage young graduates to consider a career in municipal finance?

Yes, I would encourage people who are inclined to go into this field. I think finance jobs, in general, will be here for quite a while.

What qualities does one need to be a successful government finance professional?

You have to have a good IQ, dedication and self-sacrifice. You are not going to get paid as much as you would in the private sector. Also, sometimes elected officials you like will take heat and not get re-elected, or a new elected official might come in and undo everything you’ve been working on. You have to live with it and support it, because they are the ones running the show.