Economic reasons led quints to achieve popularity in the mid-80s. Now, with tightening budgets nationwide, departments are considering them again.

A “quint” is short for quintuple combination, which is a fire response vehicle that has a pump and a water tank, carries a hose and ground ladders and has an aerial device, be that a straight ladder or a platform. It’s designed to be a jack of all trades.

“As far as their popularity, there are several views on the use of quints,” said Tom Rinelli, a 27-year veteran of emergency services and webmaster of www.unyquefiretrucks.com. “Volunteer departments often faced with limited manpower response, particularly during the daytime hours, tend to favor quints as they provide all the tools on one vehicle. Career departments have mixed views as quints are often used by political entities to consolidate individual engine and truck companies and eliminate staff as cost saving measures with the justification being that the truck has the ability to act as an engine and truck.”

Atlantic Volunteer Fire Department in Iowa purchased its first quint in 1997. Chief Mark McNees said the department had always wanted one, but it wasn’t until a downtown fire the need was realized.

A three-story building caught fire and the department did not have the equipment to reach the blaze, requiring a neighboring department to put it out. “Once they saw a good example, we were able to raise the money to get a quint,” said McNees.

Beyond three-story buildings downtown, McNees stated their biggest need for a quint is a seven-story retirement home. “With the aerial, we can rescue people and get firefighters in. We can also get a stream of water into areas.” McNees added, “It’s a good asset to the entire area.” Atlantic Volunteer Fire Department has been able to mutually aid neighboring communities that cannot afford quints. McNees said Atlantic is one of the smallest cities that can.

“It’s a big tool — it can do a lot. Not everyone needs one, but if they do, they are invaluable,” McNees said.

Some career fire departments continue to use quints, including the Mason City Fire Department in Iowa. The department serves a city of more than 28,000 people and owns a 1997 quint. “We’ve had one in the past,” noted Deputy Chief of Operations Doug Janssen. “It works out great since we don’t always know staffing — it gives flexibility.”

Mason City Fire Department operates all EMS services. All personnel are licensed EMT-B level or higher, which can leave the department short-staffed. This is where the quint comes in handy. “That is the primary benefit we find,” said Janssen. “It’s been a good match.” He added if the main pumper is down the department still has other pumping capabilities with the quint.

Janssen noted quints come with more up-front costs, but otherwise the department has no complaints. In fact, they have just ordered another quint, and during a trip to the factory, Janssen noted a number of quints were being built.

Duluth Fire Department in Minnesota also uses quints. “We purchased our first quint in 1987,” said Chief John Strongitharm, noting previously the department had only used truck and engine companies, but after staffing reductions, the quint became a viable tool. Since 1987, the department has replaced their original quint with a newer one, staffed by four people rather than the previous three.

Additionally, Duluth has purchased another quint, being built in Pennsylvania, as part of a reorganization effort in the department. Strongitharm stated members will be pulled from truck and engine companies to staff the quint while remaining staff will go to understaffed stations. “Quints have good uses. It’s another tool in the toolbox. It’s not a perfect fit for everyone. If it works in the community, you should use it,” Strongitharm said.The department uses Chevy Tahoes for emergency medical response rather than the quint, saving wear and tear while also making sure the quint is not tied up.

“One downside is the size of quints,” said Strongitharm, noting older communities like Duluth need smaller apparatuses to navigate tighter streets and turns. “One other con is the need for role clarity.” Strongitharm stressed prior to a quint’s arrival there needs to be a clear SOG so all staff members, not just those assigned to the quint, know its role in different situations, whether it is acting as a truck or engine.

“There is no way quints are going to take the place of fully staffed engine and truck companies,” said Strongitharm. He added quints are only used as an alternative after needs from limited resources arise. “They take away some flexibility while giving some flexibility. It’s a mixed bag, depending on each individual call.”

According to Strongitharm, departments need to resist the urge to put everything on a quint and turning the rig into a “franken-rig” that is just too big or impractical for firefighters to work with. Duluth’s old rig had that problem, but Strongitharm stated, “A lot of thought was put in the design of the new one.” 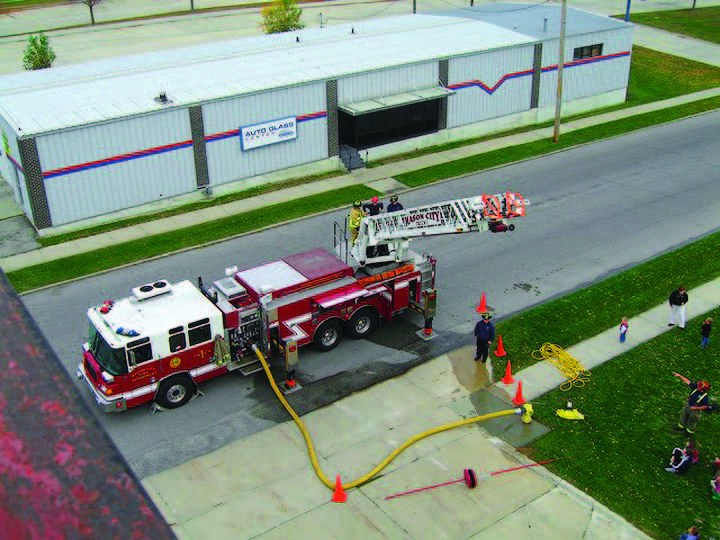 Mason City Fire Department, Iowa, gives a demonstration with their quint. The quint’s major benefit to the department has been providing flexibility when the department is short-staffed.

McKnees stressed the need for departments and municipalities to shop around and check companies’ recommendations, in addition to speaking with other fire departments who have quints. “Make sure you get what you want,” he said. He also noted departments need to know whether the company builds their own ladders or attaches other companies’ ladders. “I prefer the company build their own,” McKnees said, explaining it is one less hassle when it comes to repairs.

“They really need to do a good job researching what their needs are,” said Janssen, adding departments need to plan around the apparatus. “They need to consider not just present needs but future needs.”