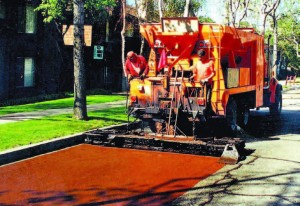 Slurry Seal coating and micro-surfacing have been touted as versatile and low-cost applications that can extend the life of city streets by five to seven years. Both petroleum-based emulsion products are mixed with a fine chip aggregate and spread in thin layers to fill cracks and ruts. (Photo provided)

Keeping roads in tiptop shape is never easy, especially in areas where the weather can be frightful and cities have to deploy a fleet of plows, sand and salt trucks to clear them year after year. There are four key factors when it comes to implementing a preventative maintenance program on streets: the existing road conditions, the costs associated with the proposed system, the projected life extension and the level of service.

“A road maintenance program is not a road replacement,” said Mark DeVries, maintenance supervisor for the McHenry County Division of Transportation in Woodstock, Ill.

He knows from experience how hard it is to find a product tough enough to withstand a harsh Midwestern winter. He’s always looking for products that can stand up to his equipment, which threatens to destroy any application spread upon it.

DeVries said his engineers tried slurry seal and micro-surfacing options but found that his winter equipment did a pretty good job of stripping the paper-thin coating. “It may be a better option for areas that have less winter than we do and whose pavement tends to last longer in the first place, but it didn’t adhere to our roads the way we needed it to,” he noted.

Slurry Seal coating and micro-surfacing have been touted as versatile and low-cost applications that can extend the life of city streets by five to seven years. They are petroleum-based emulsion products that are mixed with a fine chip aggregate and spread in thin layers to fill cracks and ruts.

“It’s like driveway sealant with a little bit of aggregate in it,” said DeVries.

According to the International Slurry Surfacing Association, the application can make a big difference to asphalt when it’s spread before serious deterioration occurs. Slurry is best used on newer roads, while micro-surfacing, which has an added polymer, is designed for older roadways. These maintenance programs have proven to be viable solutions and have been used successfully in areas such as California, Oregon and Arizona.

After trying slurry seal and micro-surfacing on their roads and realizing that a stronger solution was required, DeVries and other engineers have determined that there is another option that goes a lot farther when it comes to protecting and extending the life of Northern thoroughfares.

“We tried some of the less-expensive methods to fix our roads as well, but as we developed our maintenance program, we found that we would benefit more from an overlay,” said Jeff Nash, principle engineer for West One Public Works in West Des Moines, Iowa.

A thin lift or milled overlay is a 3/4 to 1 1/2 inch covering of hot mix asphalt over an existing road that addresses the problems of surface cracking, road roughness and rutting. These overlays have been touted by the Federal Highway Administration, the Foundation for Pavement preservation and others who feel that the overlay is a more durable option than something akin to driveway sealant, which only presents a short-term solution to deterioration. While the overlay can be applied to the existing street, experts says it’s best if the user mills an inch or two of the road to get below any cracks in order to patch the area most effectively and create the smoothest surface possible.

“It costs more, but you get more life out of the road and it’s been the best solution for us,” Nash said. “In the end it’s much more cost effective because of how long it lasts.”

The results of the eco-efficiency analysis found that milled overlays have the highest environmental impact in all of the main categories tested including: land use, air, water and solid waste impacts, among others, and that micro-surfacing performs best because it requires less than 50 percent of the materials that an overlay does.

“It may still be too early to say for certain that overlays are the way to go when it comes to road maintenance, but as with all of the emerging pavement technologies, it’s a challenge and they have to experiment,” said DeVries. “Still, so far it’s worked better for us than the other options, we get better aggregate and it’s adhering better to the road.”