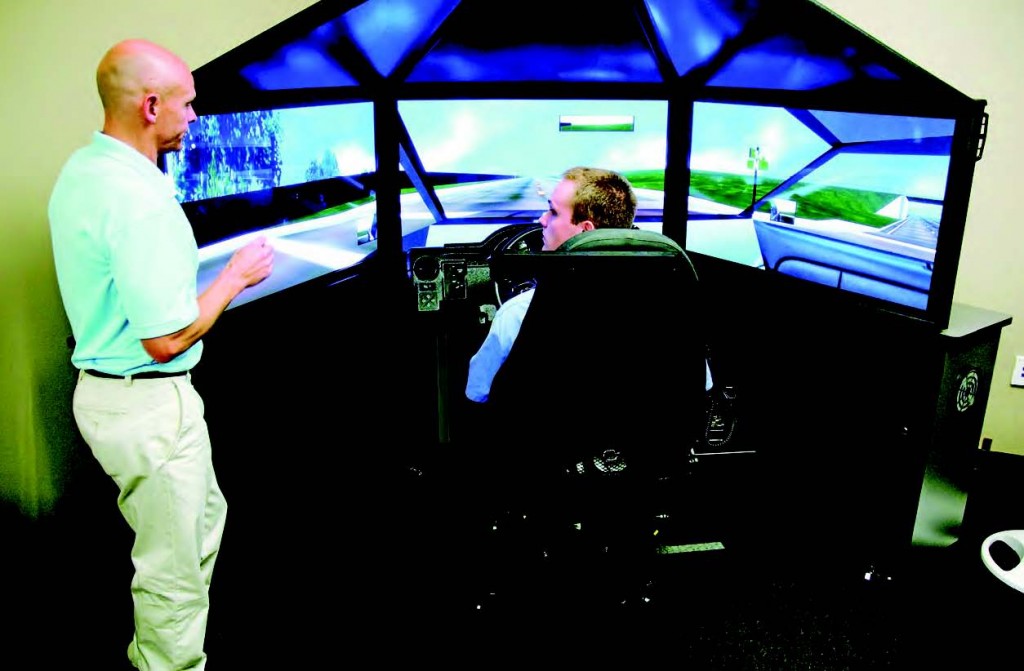 David Baxter provides instruction to an officer participating in the Arkansas Municipal League’s defensive driving program. The program uses a simulator to train officers, especially those dealing with Code 3 or pursuit situations. ARML’s simulator is stationary and kept in its own room but there are mobile options available through several companies.

Arkansas Municipal League is one of two or three municipal leagues that utilize a simulator in their defensive driving program. The program was launched in January 2009 and to date, Program Instructor David Baxter has worked with 1,200 officers from 60 municipalities within the state. Baxter, a former, seasoned police officer, has worked in police training for approximately 10 years and is a certified Arkansas law enforcement instructor with all training provided to Arkansas law enforcement officers being certified through the Arkansas Commission on Law Enforcement Standards and Training.

“We have numerous cities where I am a part of their training curriculum now,” said Baxter. “There is a wide range of municipalities that have participated.”

While the simulator allows for many different driving experiences along with different vehicle types, Baxter stated they have tailored their program to law enforcement, particularly those dealing with code 3 and pursuit situations since they represent the greatest possibility for liabilities.

Some cities and municipal organizations are turning to driving simulators for training their police, transit and utility drivers. (Shutterstock photo)

“I train two to four officers at a time,” said Baxter. “The first portion of the class covers liability and tactics. The second portion is on the machine itself.”

Through the use of a simulator, officers can practice proper passing, clearing an intersection and handling other high-risk situations. The simulator is capable of creating many different situations such as a suspect going down the wrong way on a one-way street and multiple passing scenarios. The simulator can also create different distractions in addition to several different weather conditions. Baxter noted the program helps officers practice self-control as well as being aware of their surroundings. Focus is given to speed since it is a contributing factor toward most accidents, in addition to stressing officers the need to follow the law by passing on the left.

“It’s a good tool — but it doesn’t replace hands-on experience — but it is an effective tool,” said Baxter.

Simulator training is kept short with some individuals experiencing motion sickness, which is why Baxter tries to train two to four officers at a time so they can be rotated out of the machine. Officers can return for more advanced training with the simulators if they so choose.

Simulator use does have benefits, such as officers being able to make mistakes and crash without causing costly damage. “We can’t put them in a situation (in reality) where they are going to crash,” said Baxter, noting the simulator will replicate even the sounds of a crash, helping prepare officers for such an event.

“We can replay and critique the videos,” said Baxter. “They can see where they made their mistake and improve next round. It’s hard to critique in (an actual) car.” Baxter added officers will often make the same mistakes in the simulator that they might make in the real world under stress.

ARML’s defensive driving program has proven to be successful, according to Baxter. “We are definitely recognizing less accidents in the departments we’ve trained,” Baxter said, noting they have seen a 20 percent decrease in accidents within the municipalities they have been working with. “If we can reduce it by one (accident) that is one less person hurt — that is good enough for me.”

Along with reducing accidents and possible injury or fatalities, Baxter added municipalities also benefit from a solid defensive driving program. “With less vehicle accidents, premiums go down by nature.”

To municipalities and municipal leagues considering incorporating simulators into their training curriculum, Baxter said, “Just check around and see what fits your budget and specific needs.” Other factors they need to consider is that they will need a law enforcement instructor and space for the simulator, especially if it is stationary like ARML’s simulator. They will also need to consider future maintenance. “Ours just broke and is getting fixed. After 1,200 people using it, it’s going to break down.”