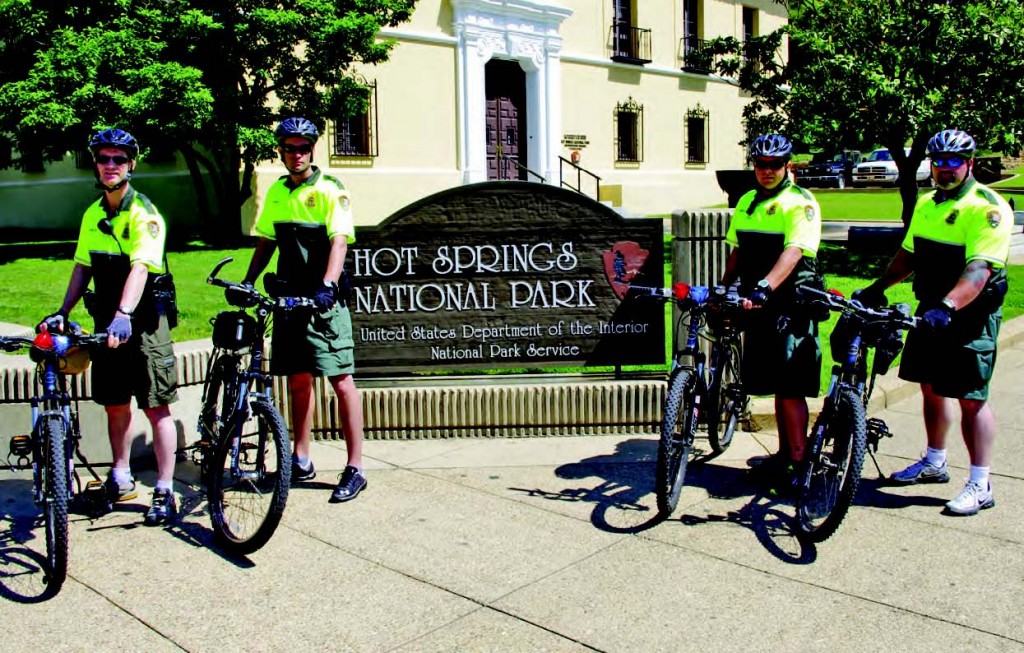 Rangers D. VanNest, A. Griggs, Z. Summerlin and Ranger F. Stock are among the officers who patrol Hot Springs National Park on bicycle. The national park located in Arkansas has utilized bicycle patrols since 2006. (Photos provided)

Thousands of visitors come to Hot Springs National Park each year to relax and enjoy the famous, soothing thermal waters of its 47 hot springs. Known as “The American Spa,” this urban park is located in the Diamond Lakes region of the Ouachita Mountains in central Arkansas and covers 50,000 acres of mountains.

Despite the extreme heat of Arkansas summers, park rangers stay visible and accessible to locals and tourists by patrolling the park and town on bikes.

“Removing the barrier of a patrol car makes the ranger more inviting to approach,” says Jeff Johnson, operations supervisor for law enforcement. “People won’t flag down a patrol car when they need help nine times out of 10. But when you’re on a bike, they are more likely to talk to you and approach you.”

The park decided to put officers on bikes in 2006. It sent five officers to an extensive training program at International Police Mountain Bike Association. That training included how to perform crowd control, shoot firearms and take down fleeing suspects while on a bike, as well as safety procedures and state laws for biking on the roadways. A few years later, the park sent five more officers to the training.

Rangers usually dedicate a couple of hours a day on about half their workdays to bike patrol. “It’s not advantageous to be on the bike all day,” says Johnson. When bike patrolling, they tend to cover the park’s 30- mile trail system, which is a lot more ground than if they were walking. They also patrol the downtown area, which is where most visitors come to enjoy the springs. 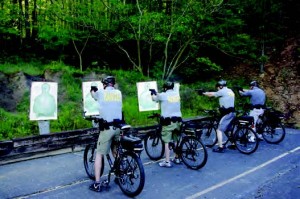 Hot Springs National Park bike patrol rangers practice handling themselves and their bicycles in a variety of different situations.

“When we are on our bikes, we want to be visible to people, so we tend to go to heavily populated areas,” says Johnson.

The biggest challenge is the heat. Officers are required to wear body armor and a bullet-resistant vest, as well as other gear.

“With our high temperatures and humidity, you sweat just walking to your patrol car, let alone biking up and down hills,” says Johnson. “We make sure biking rangers take plenty of breaks, stay hydrated and limit the time on the bikes due to the nature of the elements. I can’t explain how hot it is and how much fluid you lose through sweat.”

Rangers are encouraged to stay in shape and required to exercise at least three hours each week, which is built into their work schedule. Each year they also undergo a physical efficiency battery test as well.

Despite the physical strain, rangers are willing to get on the bikes to be accessible and connect with the public. “It’s a neat opportunity to be able to interact with people and such a stark contrast from being in a car,” says Johnson. “It also allows you to be a little sneaky. You see and hear things you normally wouldn’t from a patrol car.”