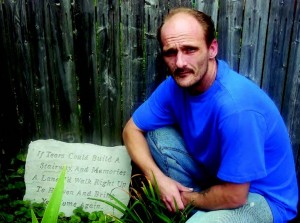 In 2001, a drunk driver took all four of Ohio resident Peter Mayer’s children from him. They were ages 10, 9, 8 and 7. He says, “There’s just no excuse for getting behind the wheel when you are drunk. You don’t know how many lives you will destroy. There has got to be a way to stop people from doing this to anyone else.” (Photo provided)

“The four million adults who drink and drive each year put everyone on the road at risk,” Center for Disease Control Director Dr. Thomas R. Frieden said recently. “In fact, nearly 11,000 people are killed every year in crashes that involve an alcohol impaired driver.”

“Drunk driving is a public health problem with far–reaching effects,” she said online. “Drunk drivers, who have delayed reaction times and reflexes, put even the most responsible drivers and pedestrians in harm’s way. Public support to prevent drunk driving is strong.”

Police officers, state troopers, sheriffs, deputies and constables are on the front lines in the battle to keep alcohol-impaired drivers off the street. One of the tools in their arsenal is the breathalyzer test.

A more practical instrument came along in 1954. Whereas The Drunkometer required re-calibration when it was moved from place to place, the Breathalyzer, using a color-changing chemical reaction, was highly portable. Though it began as a brand name, breathalyzer has become the generic name for this type of machine.

Drunk-driving defendants all over the country are challenging with increasing frequency the precision of field breathalyzers including the Intoxilyzer 8000. Some challenges have been successful. While this is good and appropriate news for those who are unjustly accused of impaired driving, it can be devastating to prosecutors who are trying to keep drunk drivers from harming themselves and others.

Defendants, both innocent and guilty, are raising a number of issues including the possibility of human error, improper maintenance procedures and improper training. Also being questioned are the effects of external environmental factors such as the temperature and a person’s exposure to certain chemicals at home or at work. Other issues are the amount of time between a person’s arrest and the breath test, and the fact that it can take multiple attempts to get a good reading.

Additionally, there are concerns as to whether a person who has certain health conditions or who coughs, burps, vomits, uses certain lozenges, uses mouthwash, breathes too deeply or blows too long into the machine may receive breath test results that don’t accurately represent his or her true blood alcohol content. With all of these concerns, and the manufacturer’s refusal to turn over computer source codes it’s no surprise that breath test results are being challenged.

The state of Ohio used a grant from the federal government to purchase 700 new Intoxilyzer 8000 machines in 2009 at a cost of over $6 million. Now the state is experiencing an avalanche of disputes. The purchase was controversial from the beginning because people questioned why the Ohio Department of Health would purchase a product that already had so many lawsuits against it, and why it would do so at a per unit price that was significantly higher than other states paid. Ohio’s contract price was approximately $9,100 per instrument, while Kansas, for example, entered into a contract with the same company for the purchase of the Intoxilyzer 8000s for approximately $5,000 per instrument.

No matter the purchase price, there are officials in several states who refuse to use it. In 2011, Judge Gary Dumm of Circleville Municipal Court ruled that test results from the Intoxilyzer 8000 would not be admitted in his court until the state presented scientific proof that the machine’s technology is sound. Last month, Cincinnati Prosecutor Charles Rubenstein instructed officers to switch back to the Intoxilyzer 5000. Judge Kenneth Zuk in Clermont County threw out test results in one DUI case because the testing device wasn’t recalibrated by the operator as required. An appeals court recently overturned that ruling.

One sad truth is that people are going to jail due to false positive results. Whether these results are from faulty products or operator errors, reputations can be ruined, careers destroyed and families torn apart. Conversely, people who should be punished can use the test’s unreliability as a tool to get away with their crimes sometimes more than once. Some estimates put the percentage of repeat offenders above 30. Of that 30 percent, a significant number of individuals have six, 12 or 20 drunk driving arrests.

It’s safe to assume that the results from this machine will continue to be challenged.