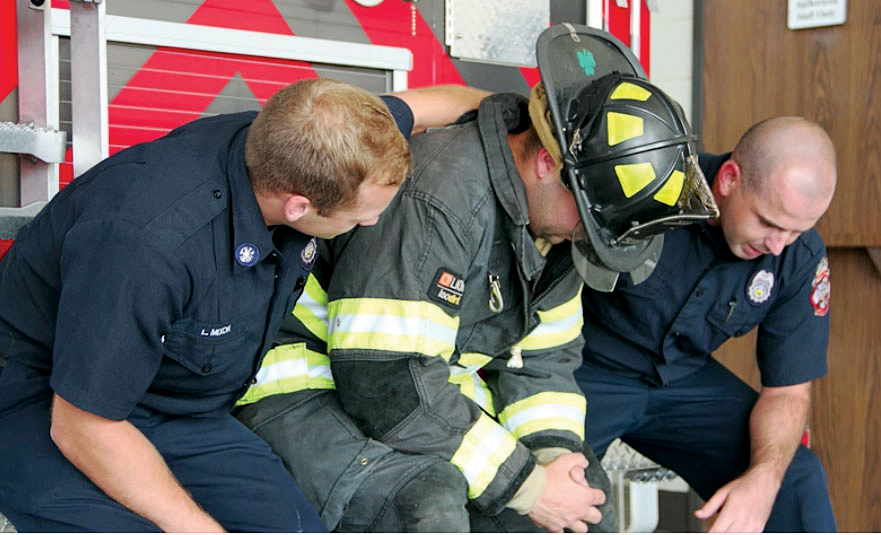 Peer support is one of the options mentioned available to first responders who are dealing with stress and trauma or contemplating suicide. Many cities and departments have employees trained in peer support to assist others. (Photo provided)

Central Ohio Technical College held a First Responder Mental Health Awareness Summit Nov. 13, 2019, at the Reese Center. “The concept came together amongst the faculty of the Institute for Public Service and Safety who, for some time, had been hearing more and more about the issue,” Kevin Reardon, COTC Institute for Public Services and Safety director, explained. While there was a significant amount of information available on many different programs, much of this was not a well-known fact by members of the community and those who may benefit from the programs.

As the number of suicides of first responders continues to rise nationwide, the COTC wanted to do its part in awareness and prevention. “The summit was a way to bring together the impacted professions in public safety with those clinicians and other program staff who were already functioning in some capacity to work with this at-risk group of responders,” Reardon expounded.

The summit was attended by 141 people. Attendees experienced two keynote speakers, a panel discussion and multiple breakout sessions. The first keynote speaker was Kenneth Yeager, director of the Ohio State University Stress Trauma and Resilience program, who spoke on “Building Resilience in the Face of Vicarious Trauma.” Brian Barkett, founder and president of the Better Minds Group, spoke as the second keynote speaker on “From PTS to PTSD to PTSD Free.”

Four different breakout sessions were offered to program participants. Lt. Marty Fellure of the Ohio State Highway Patrol and Steven Click, first responder liaison from Ohio Mental Health and Addiction Services, spoke on “Peer-to-Peer Intervention.” This session highlighted the Ohio A.S.S.I.S.T. program available to first responders. A.S.S.I.S.T. provides participants with techniques after being in a critical incident and hosts various events for responders and their families and training for agencies.

A second breakout session, titled “How Big is Your Bucket and What’s in it?,” was offered by Lisa K. Callander, city of Columbus Employee Assistance Program director, and Mick Yinger, executive director of The Bridge. This session was in two parts and focused on the “bucket” concept to help lead a balanced life. It examined first responder traits that can be helpful on duty but not off duty, as well as what contributes to burnout, cumulative stress and critical incident stress. Yinger provided information on how The Bridge, a nonprofit organization of first responders, offers a multifaceted approach that promotes personal growth and healthy relationships.

Kelly Campbell, executive director of The Woodlands Serving Central Ohio Inc., taught a third breakout session titled “The Body Keeps Score.” During this session, she spoke on the causes and consequences of trauma and the path of recovery. Participants also gained a greater awareness of how their trauma response affects their daily functioning.

“Saving Those Who Save Others” was a fourth breakout session option offered at the summit by Jennifer Cramer, Firefighter Behavioral Healthy Alliance outreach
team and instructor. This session taught participants how to observe signs and symptoms of emotional and physical stressors within both themselves and others. It then continued with how to develop the communication skills necessary to use under stress.

The entire summit lasted from 8 a.m. to 5 p.m. that day. Reardon admitted it was a long day, but response from the participants was very positive. There are plans for another summit event in the future.

A video-based training program called “Start the Conversation” was developed in Georgia containing a documentary discussing PTSD, stress and line of duty deaths with real public safety personnel. Melissa White, Georgia Public Safety Training Center Instructional Services Division supervisor, stated, “We developed a mental and emotional wellness course in 2017 and, during the process, realized that many first responders experience stress and often do not know where to turn. So, in 2018, my team decided to create the documentary ‘Start the Conversation.’” 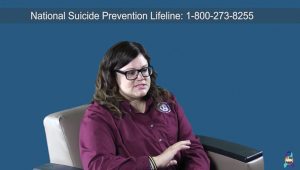 One participant in “Start the Conversation” who shared her own personal experiences dealing with stress and trauma in a dispatch center was Laloni Smith. As each participant shared their experiences, the National Suicide Prevention Lifeline phone number, (800) 273-8255, scrolled across the top of the screen. (Photo provided) 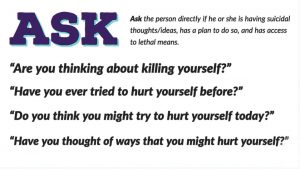 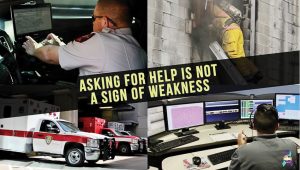 First responders can include police officers, fire department personnel, EMS responders, dispatch center employees and more. When feeling overwhelmed or stressed and wishing to seek help, “Start the Conversation” reminds first responders that asking for help is not a sign of weakness. (Photo provided)

This documentary was released on YouTube Dec. 19, 2018, and the online courses were officially offered beginning Jan. 1, 2019. There is also a website dedicated to “Start the Conversation,” which has each section of the full documentary available to watch. Since its inception, there have been over 19,875 YouTube views and 6,220 first responders have completed the online course.

“We are very passionate about raising awareness for mental health wellness and suicide awareness among public safety personnel. The traumas they respond to leave a lasting impression on them, and they need to know they are not alone and where to turn when they can no longer manage on their own,” White encouraged. “For many years public safety has had difficulty addressing mental health and suicide. We are dedicated to changing that.”

Since making the documentary and starting the course, White and others associated with the program have received emails, phone calls and texts asking about “Start the Conversation” or sharing personal stories about how watching the documentary has helped them or someone they know. Outside agencies have also sent in requests asking permission to use the video for personnel training outside of Georgia.

White continued, “We are currently filming and releasing a docuseries to continue the conversation and including the effects on the family of public safety.” The first in the series is called “What You Don’t Know” and was released Jan. 15. It already has 582 views.