Officer Troy Quick is determined to touch young lives early and change the perception of how they view law enforcement.

“It can be hard for a kid growing up and thinking that the police are against them,” he said. “I want them to know that I am a real person and I care about their future.”

Quick is a member of the Conyers, Ga., Police Department who serves as a school resource officer in Rockdale County Public Schools, and last December, he became the only officer from Georgia to receive the third annual Attorney General’s Award for Distinguished Service from William P. Barr. The nomination lauded Quick for making a lasting impact on the youth in his community by mentoring them, supporting them and helping out in a number of thankless ways. His dedication and service is truly remarkable, but so is the humility with which he carries out his role. 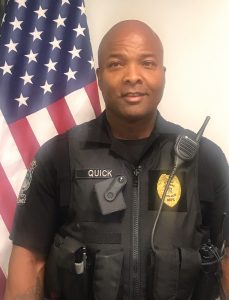 Quick, 51, said growing up in Brooklyn, N.Y., he was a “knucklehead kid” who could have easily gone down the wrong path in life had it not been for an officer who gave him the benefit of the doubt and ultimately saved his life. He said a senseless decision nearly caused him to lose any chance at success, but the officer offered him a way out: He took him to a boxing gym and showed him a more healthy way to channel his anger and energy.

With four years under his belt at the department and two as a school resource officer, Quick said he loves his job helping children see the person behind the uniform. He likes the fact his students see him as a family man, a person of faith and someone they can count on for help. With a primarily African-American student population, Quick knows it’s up to him to erase the color lines, encourage respect and show kids how the law affects them.

“I have white officers come by the school, and I let the kids see how I interact with them. I let them see that these men and women are my brothers and sisters and that I care about them. I let them see me as a dad, as a coach and I’ve even been known to work out with the
kids. When the vest comes off, they see the man underneath and they love that,” he said. “They know I’m not Robocop.”

Although his office has become a popular hangout on campus, Quick says there are still those occasions when his job supersedes friendship. It breaks his heart when students make the wrong choices, but it’s up to him to protect them, even if that means paying the price.

“It’s really ironic,” he said. “When the kids get in trouble, they immediately start apologizing. It happened just recently. They tell me that they are sorry it happened. They are sorry they let me down. And sometimes, they put the cuffs on their wrists themselves.”

Not only does Quick mentor students, help them have a healthy respect for law enforcement and execute his duties when necessary, he also tries to discourage kids from joining gangs before they are recruited. Quick knows they are at a difficult time in their lives and in constant search for a family unit they may not have at home, but he assures them that gangs are not the answer. Having been involved in mixed martial arts for the past 15 years, he encourages them to come out to American Top Team gym where they can find camaraderie in a healthier environment. 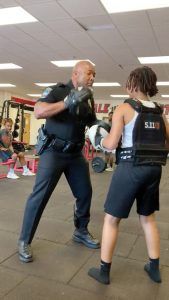 Quick works with female basketball star point guard. As a girl daddy, he likes to teach that girls can do anything a boy can do. (Photo provided) 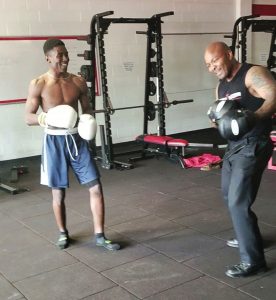 Quick encourages students to train at American Top Team gym where they not only find camaraderie but also learn how to channel emotions in a positive manner. Its concept is to train so one doesn’t have to fight. (Photo provided)

“Our concept is that we train so that we don’t have to fight,” Quick said. “Every person on the face of this planet at some point in life is dealing with or has dealt with some form of anger or frustration. Often times we act on it in a negative way that can land us in a world of trouble when, in reality, all we wanted was for someone to listen or someplace to vent.”

At the gym, students can channel that energy in an environment that embraces those emotions and liberates them. Quick said he has two former students — who are now in college — as well as eight current students who train with him and he encourages both boys and girls to take part.

“In the words of our late great Kobe Bryant, I’m a girl daddy and I’ve always taught my daughter that she can do anything a boy can do!”

Quick knows he can’t fix all of the problems between law enforcement and the kids they are sworn to protect and serve, but he’s doing his part, and at the end of the day, there is only thing he wants in return.

NEXT: The crisis facing EMS systems

“I want them to know that I genuinely love them and care for them,” he said. “That’s what it’s all about.”