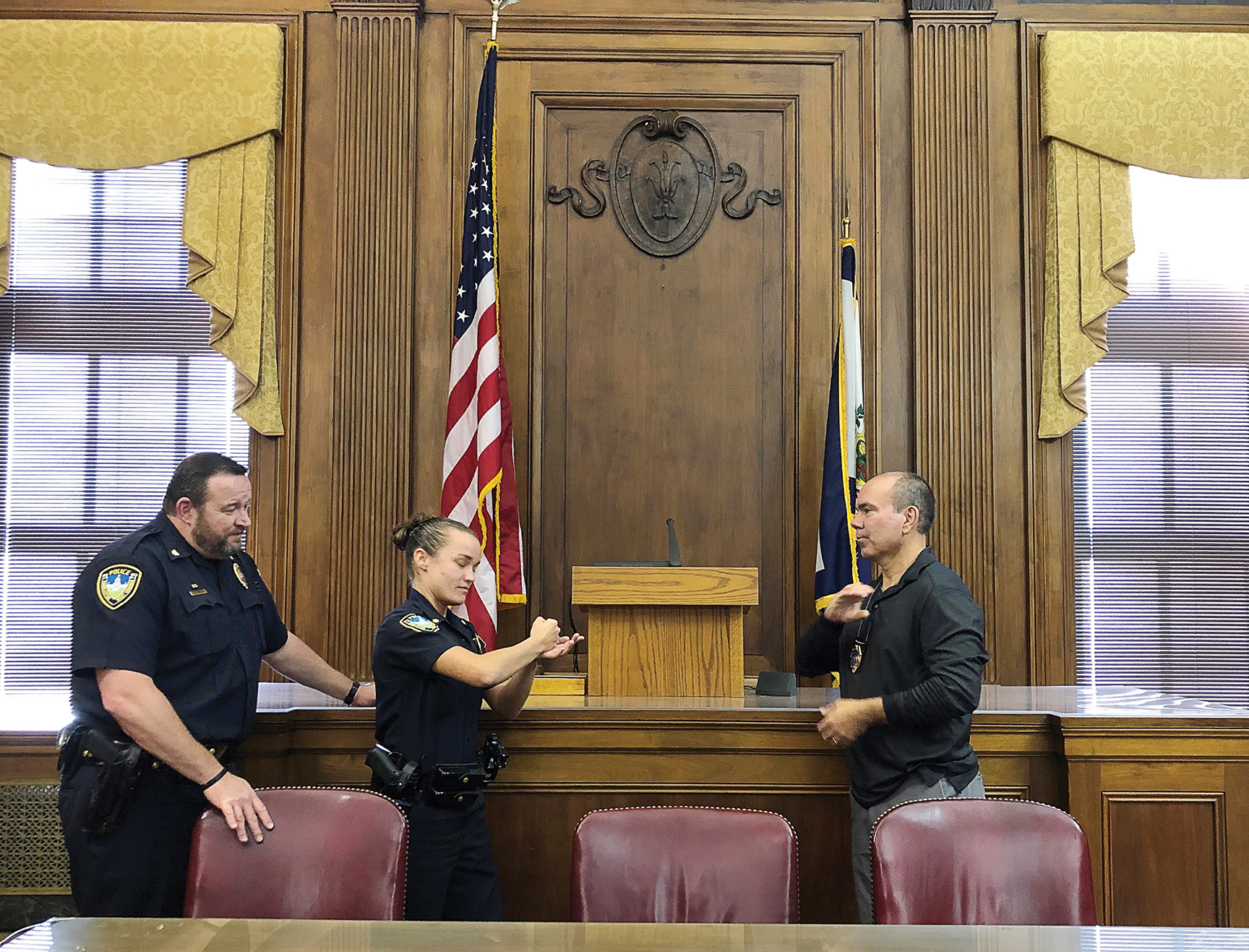 Chief Opie Smith Jr. of the Charleston, W.Va., Police Department recalls early in his career the encounters he had with hearing-impaired citizens.

“The only way I had of communicating with them was through handwritten notes,” said Smith. “Obviously communication is very important in law enforcement.”

Smith, who has been police chief for 10 months, had started in the patrol division. Then he was asked to be a field-training officer, and from there, he was on the streets working with a certified K-9. After that, he worked the SWAT team for 10 years before moving to the special enforcement unit and later the hybrid unit. He was up for retirement in November 2018 but was offered the police chief position, making for 21 total years with the department.

During that time, Smith had kept the thought of training his department, especially first responders, in sign language at the forefront of his mind.

“When you are a young officer without rank, sometimes the administration doesn’t listen to your ideas,” said Smith. “Now that I am in the position of police chief, I plan on making some changes. I am checking into sending one of my officers, Major Jessi Redden, to get trained so she could be available for callouts and also train other officers on our department.

“This is like any new skill when you are learning it for the first time. It can be a little overwhelming. You just have to practice it as much as possible. Also, during our training we were taught how important facial expressions were when using sign language.”

During accidents or other emergencies when first responders respond, the victims may be frantic and might be unable to vocalize or sign, especially if one or both hands are restricted, such as being immobilized in a wreck. What will they do then? How are you going to tell if a person in a wreck is deaf if he seems not to understand?

“Most of the time medics are dealing with injured people during traffic accidents,” said Smith. “Once we get more training out to officers, I hope they would have the skills to recognize if the person is hearing impaired. I think I will reach out to the fire department and medics to see if they have had training in this area. Also, when Major Redden can start training us, she can also incorporate training fire and medics.”

Such training can shape how officers handle certain situation. For example, if someone fails to respond to police commands, they may not be ignoring or disobeying but rather unaware of them or unable to respond.

“I think training, such as ASL (American Sign Language), makes officers aware that not all situations are what they seem to be,” offered Smith. “Training like this makes you think twice before taking any actions. We train in driving vehicles, weapon retention and multiple other areas so why not train on how to communicate with people who are hearing impaired, dealing with PTSD (post-traumatic stress disorder), on the autism spectrum or with dementia?”

Early in his career Smith was dispatched to a 911 hang-up right out of roll call.

“As I was responding, metro advised of past domestic disturbances at this residence,” said Smith. “As most officers do, I was thinking of different scenarios while I was responding to the scene.

“Upon arrival, I encountered a female on the front porch frantically waving at me. Due to this, I radioed metro and advised them I would be making entry inside and couldn’t wait for backup. I ran toward the front door and the female stepped inside and motioned for me to come in. I again advised Metro over the radio so they and my backup would be aware of the situation. I looked left and right before I stepped inside as the female continued to motion me to come in. I stepped into the living room and the female stepped into what appeared to be a dining room. At the time, she began pointing to her left, and I was thinking the worst.

“As I entered the dining room and turned to my right, I was surprised to see a teenage child bailing water from the floor and dumping it into the sink as water poured from the ceiling. The female made a motion with her hand that gave me the impression she could not speak. At that time, I began to point up and saying ‘upstairs,’ hoping she could understand. Once she did, I quickly went upstairs and located the issue under the sink in the bathroom.”