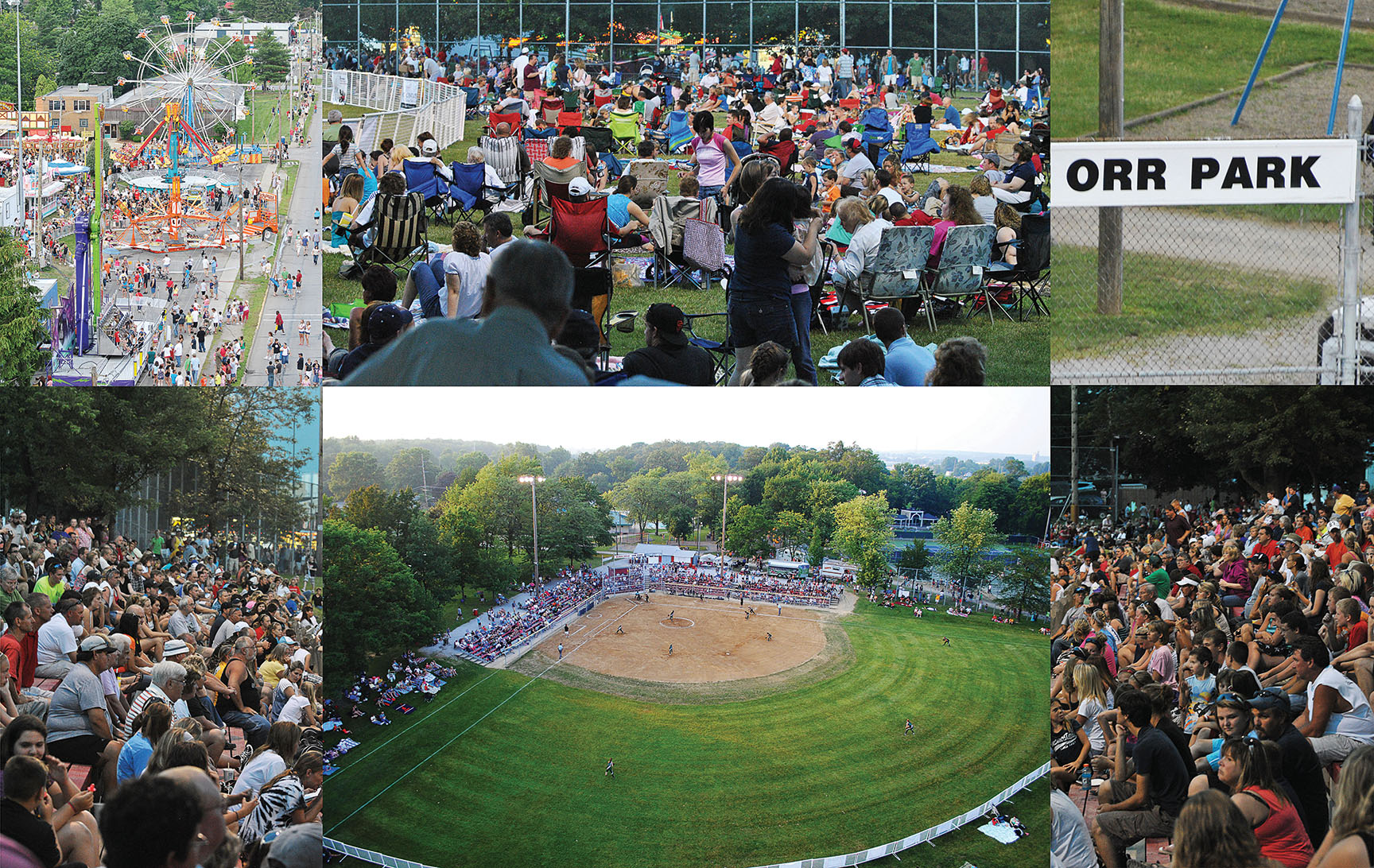 Fire in the Sky, organized by the Orrville Firefighters Association, draws in 40,000 people each year, serving as an economic boon for the city and Wayne County. (Photo provided)

Community events require intensive labor to be a success. Reaching the 10-year marker, especially when working solely with volunteers, is an impressive feat for any event. In Orrville, Ohio, a city of more than 8,000, an annual weeklong Fourth of July celebration has been going strong for 35 or 36 years, and it is a massive endeavor put together by the already-busy Orrville Firefighters Association, consisting of 29 members.

And it’s an achievement Orrville Mayor Dave Handwerk wanted to share with The Municipal, stating, “We’ve had record calls for EMS and fire. It’s not like they are less busy — they’re more busy.” Despite that, he added, “It (Fire in the Sky) just grows.”

Fire in the Sky has humble roots, starting as a local festival ran by the city’s chapter of Jaycees. After experiencing a decline in membership, however, the Jaycees determined it could no longer organize the event. One of the group’s members, who was also a carnival vendor, approached the fire department. 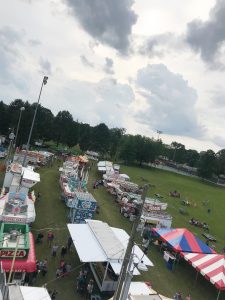 Pictured is an aerial view of the carnival section of Fire in the Sky. (Photo provided)

According to Ron Ballentine, assistant fire chief, “He said, ‘Hey, I think (the fire department) should take this one — I’ll help you.'” The event was initially a little carnival attended by locals, but he added, “Under his leadership and our membership, it grew.”

The scale of the event has indeed skyrocketed, drawing people from neighboring states and even as far away as Canada thanks in part to the Fire in the Sky ASA Girls 14U softball tournament, a two-hour-long parade that draws in about 22,000 people, the carnival — complete with games, rides and food — a 5K, three-on-three basketball tournament and an impressive fireworks display, capping everything off.

“There is a bike giveaway the night before the fireworks,” Handwerk added, noting the tickets are free. “Five boys and five girls are drawn — it’s great to see their happy faces.” Each of the mountain bikes is then registered in the Orrville Police Department Bicycle Registration Program.

Of the softball tournament, Ballentine said, “It brings an amazing number of people to town. There are softball teams from Michigan, Indiana, Pennsylvania, New York, Kentucky, North Carolina, New Jersey and even teams from Canada. We try to work with all of these travel teams.”

This has paid off. The softball tournament may have started with nine teams 16 years ago, but it has since ballooned to 100 teams only three years after its inception. This past year saw at least 80 teams participate, with Handwerk noting there’d been a conflict with another tournament.

All of Orrville’s fields are used for the tournament and a few in neighboring communities are enlisted for the cause as well. As teams are narrowed down, the championship is then held in Orrville’s main park, Orr Park.

To ensure as many teams can attend as possible, Orrville Fire Chief Chris Bishop said, “We start in August to make plans and schedules.” The ultimate goal is to get all the information out to the softball teams by Oct. 1. “Fall is tryouts for travel teams and they are setting up their schedules so parents know where each game is at and can plan their vacations (around them). The tournament is usually full by the beginning of January.” 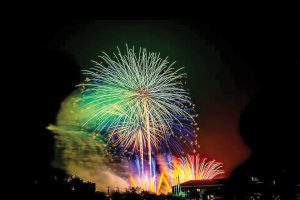 Orrville firefighters who have their pyrotechnics licenses serve as the pyrotechnicians for the fireworks display that concludes the Fire in the Sky festival. This saves the association money. (Photos by Cayla McAfee)

Each year’s event depends on how the calendar falls, according to Ballentine. The festivities kickoff with the parade the Tuesday prior to the Fourth of July, and it all culminates with the fireworks the following Saturday, meaning the display doesn’t always fall on the actual holiday. For 2020, however, that won’t be the case, with the event stretching from Tuesday, June 30, to Saturday, July 4. A conversation is already underway about shifting 2021’s start from the normal Tuesday to Wednesday, June 30, and then ending it the following Sunday, keeping the fireworks on the actual Fourth of July. That final decision remains to be made.

“It takes all of the events to pay for everything,” Ballentine said. The tournament’s proceeds specifically go toward the Orrville Fighters Association’s Independence Day fireworks display, which is the largest in Ohio. Other activities, meanwhile, support the Orrville Area Boys and Girls Club.

By being licensed, Ballentine said, “It saves us extra money that we’d pay for a (pyrotechnician).”

Handwerk pointed out how diligent the firefighters are with the fireworks, ensuring they are protected and handled safely. “They pick the fireworks up with a rental truck and guard it. They stay with it the entire night before.”

The fireworks, much like the softball tournament, draw people in from all over, especially as the pyrotechnicians push the envelope with each display.

“One year I was introduced to two ladies who are firework hobbyists from Illinois,” Ballentine said, noting they liked to travel to see different displays. “After the show, I made a beeline to them to see how we did — they were really happy.”

There is also the fun of real-time reaction thanks to social media. Ballentine stated this usually comes in the form of YouTube videos or comments on the Orrville Firefighters Association Facebook page. These are largely positive, with the main complaint being parking, according to Ballentine.

“Sometimes the cellphones wouldn’t work,” he added, noting people like to livestream the fireworks. “With so many people in such a small area, it really bogs down the network.”

“It’s turned into a huge event that has an economic impact on the whole county,” Bishop added. “They estimate it at $4 (million) to $6 million.”

Fire in the Sky ASA Girls 14U softball tournament draws in travel teams from numerous surrounding states and even as far away as Canada. (Photo provided)

Most members of Orrville Firefighters Association have firefighting in their blood with multiple generations having volunteered there. Many members are the third or, in one case, the fourth generation. All of them pitch in throughout the event.

“The department is all family,” Ballentine said. “It makes me real proud. They are sacrificing a lot of family time that week.”

Handwerk echoed this, stating, “The families of these guys are amazing since they are pretty much gone for a week.”

The firefighters are not alone in the endeavor, however.

“We’re well-supported throughout the county,” Ballentine said, noting this comes in the form of donations and companies purchasing advertisement packages. There is also a local church wanting to help so it has been picking up trash during the festival. “It’s made it so our members could focus on other tasks.”

Orrville’s police department and utilities department also provide a lot of support throughout the festivities as do neighboring jurisdictions’ law enforcement and first responders. They are all a major help, especially after the fireworks when traffic gets backed up.

“On my end,” Bishop said, “I’m so proud of what our group does. This has a huge economic impact for hotels and restaurants. A lot of teams come from out of state and it’s become a repeat custom for them. We do great. From day one, we have to give them the product we want them to have. I hope that we can keep doing what we are doing.”

“For me, I think these guys get how important of an event this has become,” Handwerk said. “It’s become a part of everyone in this area’s Fourth of July. They really take it on and do a great job.”

NEXT: Roswell, Ga., parks director has lifelong love of parks