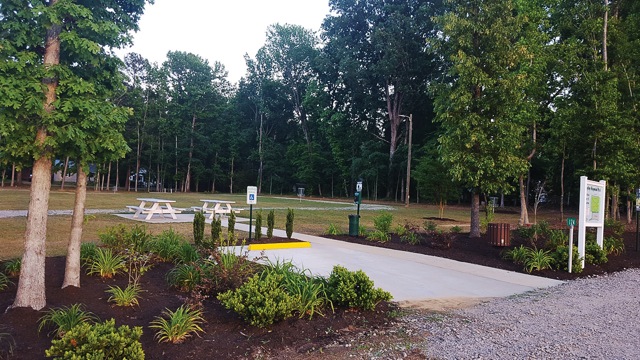 Pictured is the entrance to Hayley-Haywood Park in Warrenton, N.C. It is the first municipal park in the town and offers picnic tables, a walking trail and a disc golf course. (Photo provided)

The town has cleared additional areas adjacent to the park that are owned by the school system. The clearing of the underbrush has really opened up the site to the neighbors’ delight, said Davie.

“Also the town contracted with Duke Energy to add lighting to the park. Electricity had to be run to the property, and the town paid for the construction of three outdoor light poles as well as taking on the monthly, ongoing electricity bills.”

Currently, the town is developing a bicycle/pedestrian plan that is attempting to link the park to other areas of town and the country, via walking trails.

According to Davie, the most difficult aspect of building the park, besides funding and location, was the fact that it was the first park ever constructed by the town.

“The project became a bit of a learning curve for staff,” said Davie. “With only $28,000 to work with, the town staff had to contribute their time and efforts to do what typically would be done by a contractor.” 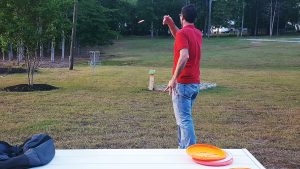 One gentleman is shown throwing his disc. (Photo provided)

Haywood, when asked what he was most proud of where the park was concerned, had a simple answer: “I am thrilled at the public’s acceptance of this gift in remembrance and recognition of the contributions to the community of my grandparents.

“Paul Fletcher Hayley and Nancy Christmas-Hayley — both born into slavery — who acquired the property and maintained it while it was the locus for raising seven children and six grandchildren; and Thomas W. Haywood Sr., M.D., and Louise Viola Hayley-Haywood who served the community for many years as a physician and school teacher respectively. Paul Hayley served in the North Carolina legislature as a representative of Northampton County where he was born and also taught in public schools before a 35-plus years as a U.S. government mail clerk on the railroad between Washington, D.C., and North Carolina — missing only three days from work during that period.”

Similarly, Thomas W. Haywood served the Warrenton area for more than 50 years as the first and only black physician, seldom refusing service for inability to pay. Denied staff privileges because of race when Warrenton acquired its own community hospital, he ended his career as the hospital’s chief of staff.

“My mother taught me in fourth grade during her 30-40 years as a school teacher,” said Haywood. “I was privileged to represent my surviving family members who made the collective decision to donate a portion of the original real estate — previously a cotton field — for the purpose of the park.”

For other cities considering the addition of a park to their own communities, Davie offered some thoughts.

“This project was a win-win for citizens, the town and the property owner and surrounding property owners,” concluded Davie. “Being able to leverage the grant funding to go along with the property donation allowed a small town with limited resources to get the project off the ground.”

A final note from Haywood: “I would just like to add that the survivors of my deceased siblings happily joined in the dedication of the park. It is our hope that this park will be an asset to the community in perpetuity.”