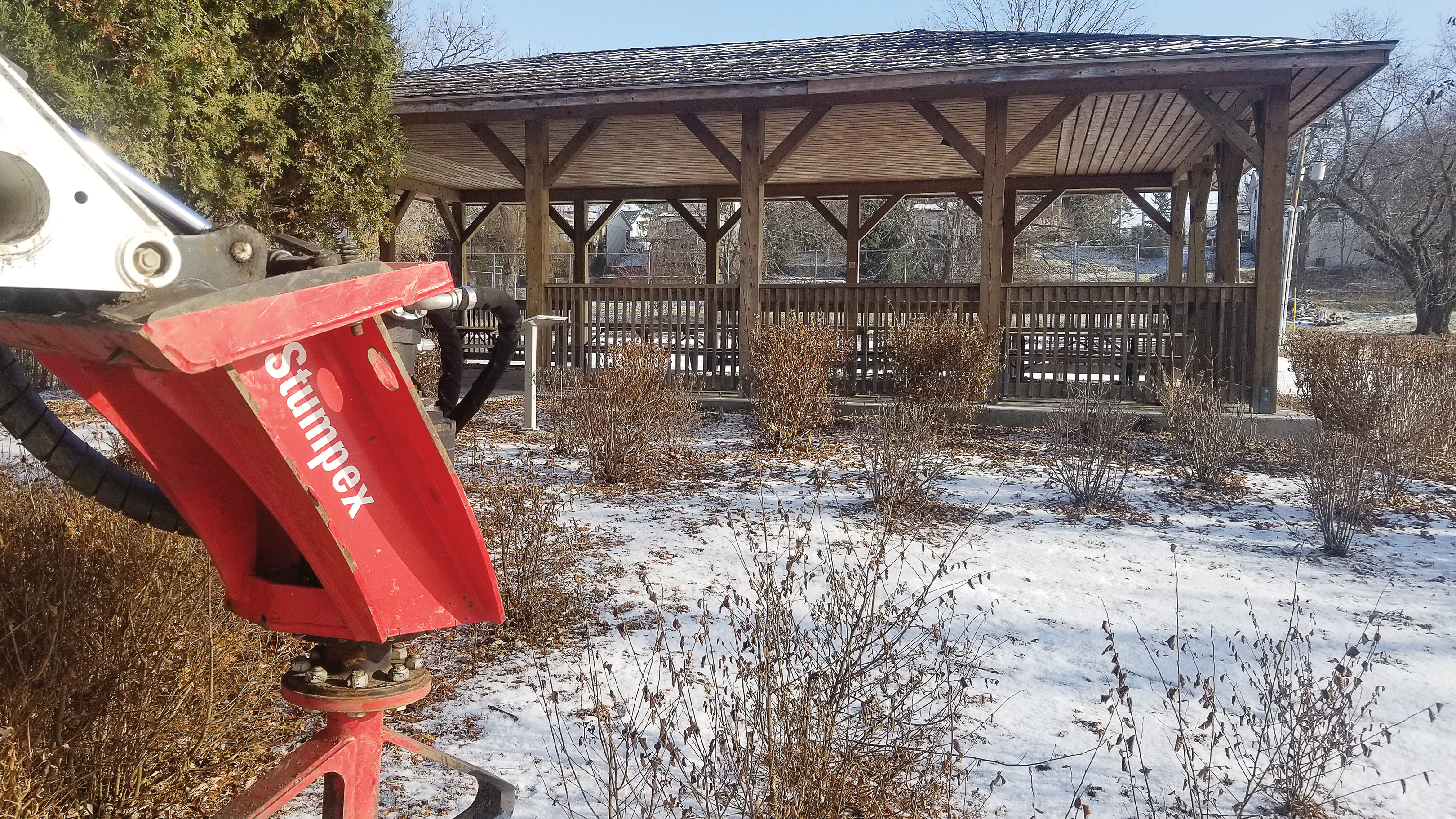 Across North America, the emerald ash borer is infesting ash trees, leaving behind fields of dead and dying trees. In wooded lots, the dead trees can be a vital part of the ecosystem, providing nesting branches for birds and vital nutrients to the forest. In municipal settings such as parks and streets, however, the dead trees pose a safety hazard to pedestrians and cars, requiring removal.

Parks all over North America are dealing with the dead trees left behind by the borer. Recently, Lakeview Park in Oshawa, Ontario, Canada, lost 150 ash trees. After felling, the park was left with a graveyard of sorts: fields of stumps marking where the trees had stood. Stumps are unsightly and occupy otherwise usable space or fertile ground for new growth, but when it came to removing them, the park was stumped.

Removing stumps requires specialized equipment that can effectively grind the wood to level ground without throwing rocks or debris. Stumps are usually ground or dug out and replaced with topsoil. With an immense amount of stumps in the park, and each ranging from 20-24 inches in diameter, the parks department couldn’t begin to dig them out by hand. Given the large size of the park, one of the largest in Oshawa, and the constant use by locals, shutting the park down for stump removal wasn’t an option. The parks department branched out and called Jake Woudstra, president of Pro Lawn Landscaping, a local landscape contractor.

Grinding stumps is all about having the right tool for the job, something Woudstra knows all about. For years, Pro Lawn used a traditional skid steer grinder on his Bobcat S650 with a high-speed wheel and carbide tools. On a recommendation from a land-clearing contractor, Woudstra made the switch to the Fecon Stumpex, a high-torque, low RPM, auger-bit skid steer stump grinder.

The attachment has a threaded cone that draws the bit into stumps at 7-16 RPM. Skid steer hydraulics of 20-42 GPM power the Stumpex gear box with as much as 30,000 foot-pounds of torque, pushing the patented auger bit with stepped blades into the wood. The Stumpex slowly shaves the stumps into chips without causing high-speed debris. 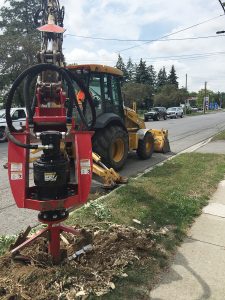 A 20- to 24-inch stump only takes 10-15 minutes to remove with Stumpex and leaves behind a small pile of large shavings that is easier to pick up. (Photo provided)

The wheel grinder would have taken Woudstra and his team weeks to grind down the 150 ash trees as cleanup and safety arrangements slow down the grinding process. Wheel grinding leaves behind huge piles of smaller chips that require extra manpower to clean up. On windy days, the smaller chips blow around, collecting on nearby cars. To reduce the damage caused by flying debris, Woudstra dedicated a safety truck and operator to each site where the wheel grinder was working. He doesn’t need that extra precaution any longer, thanks to the dynamics of how the Stumpex works.

With the Stumpex, a 20- to 24-inch stump takes 10-15 minutes per stump. Although the Stumpex attachment grinds slowly, it leaves behind a small pile of large shavings that is easier to pick up, eliminating the need for multiple-man cleanup crews. Cleanup time is cut in half compared to the wheel grinder. The low-speed grinding also reduces the need for an additional safety team and truck at each stump, freeing up the cost of a truck and an operator for other productive work.

“Basically the Stumpex not only doubled our daily production, it cut our labor in half compared to using the wheel grinder,” Woudstra said.

The attachment even ground a stump 6 feet wide in diameter, one of three exceptionally large stumps at the site ranging from 4-6 feet wide. Woudstra’s crews processed the stumps in multiple plunges in a clockwise motion, repositioning the auger bit as needed. Operators had to be trained on positioning and angling the screw correctly, but with a little learning, they were able to easily accomplish the grinding. What would have taken a wheel grinder the better part of a day took the Stumpex three hours, allowing the crew to continue working on smaller trees.

With the wheel grinder, the team could have averaged 25 stumps a day. Using the Stumpex, they accomplished 50 a day; Pro Lawn was in and out of the park in three days, allowing locals to enjoy their park without the sights and sounds of grinding once again.

Safety was an important consideration in grinding the ash stumps — the parks department didn’t want to shut down a park just for stump clearing, so there were naturally people around while Pro Lawn was working. Risking an injury due to flying debris wasn’t an option. 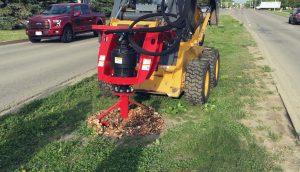 The Stumpex’s low RPM blades and vertical orientation create a safer environment when working around pedestrians or vehicles, as it dramatically reduces the likelihood of flinging material. (Photo provided)

With a wheel grinder, the high-speed grinding kicked up rocks and chips and flung them in the air, often over a shield Woudstra set up around the perimeter. Sometimes, the carbide teeth would hit a rock and break, flinging both rock and metal into the air. At best, breaking a carbide tool meant production downtime for repairs and maintenance — at worst, a flung tool could hit a car or nearby pedestrian.

The low RPM blades and vertical orientation of the Stumpex attachment are ideal for operating around pedestrians, as it dramatically reduces the likelihood of flinging material.

“The safety and productivity of the attachment could lead cities in the area to make its use mandatory for municipal stump grinding contracts,” Woudstra said.

Grinding to a halt

Breaking a tooth on a wheel grinder can shut down production for the day. Processing stumps all day can wear down parts, and when a tooth broke — a seemingly weekly occurrence — Woudstra would pull the equipment off-site and into the shop to replace the part. It was a frustrating and costly process, lengthening job time and requiring spare parts on hand.

With no carbide tools to replace, regular sharpening and greasing — every 1,000 stumps — can keep the Stumpex grinding for years. After a week of running the attachment all day, Woudstra touches up the blades with a grinding wheel according to a gauge provided by Fecon. If a blade needs sharpening on the job site, Woudstra can do so using a battery-powered grinder for 10-20 minutes.

As the emerald ash borer continues to infest forests across eastern parts of Canada and America, it leaves thousands of dead ash trees in its wake. In populated areas, the trees have to be removed safely to prevent the spread of the borer and protect local people and property.

In the Durham, Ontario area, Pro Lawn Landscaping is helping to clean up some of the devastation by safely grinding the left behind stumps. Using the Fecon Stumpex has made them more competitive on contract bids and increased their business significantly, Woudstra said. Pro Lawn is now processing 1,200-1,500 stumps a season by slowly pulverizing wood with low RPM and up to 30,000 foot-pounds of torque. The season runs from May to October and is determined by the planting season: The grinding crew is immediately followed by a planting crew that replants a new tree in the vacated spot.

With little end in sight for the emerald ash borer infestation, Woudstra has a steady flow of stump grinding contracts. Armed with the Fecon Stumpex, Pro Lawn will be able to quickly grind stumps, letting the people enjoy their municipal land safely, without the sights and sounds of grinding. In just a few years when the replanted saplings take root, it will be like the emerald ash borer was never there at all.

NEXT: Fecon launches its own brand of Oil Analysis Kits