To accommodated increased traffic in the downtown area, the public works department constructed the Old Town Newhall parking structure, for which it won the Project of the Year award. (Photo provided)

As the city of Santa Clarita, Calif., looks toward its future, the department of public works knows that transportation needs to be at the forefront. Last year, the city finished several different award-winning projects, all related to a different type of transportation.

Santa Clarita won five public works awards from the two different divisions of the American Public Works Association for 2018 projects. The highlight of these projects was its Old Town Newhall parking structure, which it won the Project of the Year award for.

The Old Town Newhall parking structure is in Santa Clarita’s downtown, which the city has been working hard to turn into an entertainment hub. This increased traffic in the area and created the need for the parking garage. 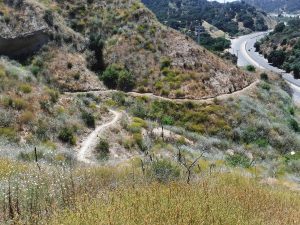 Santa Clarita, Calif., is experiencing quite a bit of growth, with its scenic beauty being a major draw. The city has worked hard to give residents and visitors more opportunities to enjoy the outdoors with the construction of trails. (Photo provided)

The 152,000-square-foot parking garage is seven levels tall and has 372 parking spaces. The top level can also be turned into an entertainment space for community events, allowing the city to have an extra venue that utilizes southern California’s nice weather. The project was finished on time and under budget.

Another way the city’s public works department has helped residents enjoy being outside is by developing plans and constructing the Heritage Trail, which connects two designed open spaces in town. By utilizing senior and high school volunteers, the public works department was able to complete the project in three weeks. In total, it cost $9,000. According to city officials, the Heritage Trail would have cost more than $200,000 to complete had it been done through private construction.

“This one was done with a particular high school group that we were able to work with in unison, and they, in turn, received credit for the work that they did,” said Araz Valijan, an administrative analyst with the city of Santa Clarita. “They were interested in this field of the design aspect — and the construction aspects — of the trail. So it was a great partnership.”

The city also partnered with Santa Monica Mountains Conservancy on the project.

In 2018, Santa Clarita continued its effort to improve bike and pedestrian safety.

“Like most communities, you look at your accident history and you tried to address where you see patterns,” Newman said. “We’re fortunate enough that we’re kind of under the national average on traffic safety, but we still focus on particular areas of concern. One of the things that we had identified was pedestrians (incidents), and we have high volume streets and high speeds.”

This was done in two ways.

First the city added electronic blank-out signs at several major crosswalks and intersections. These signs are designed to make motor vehicle drivers aware of where bicyclists and pedestrians are likely to cross. According to Newman, the signs are only active when one of the buttons are pushed. 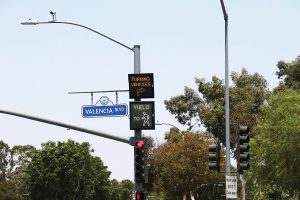 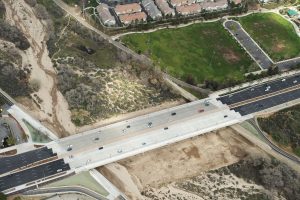 Santa Clarita Public Works Department widened the Newhall Ranch Road Bridge to include an additional lane in each direction and barriers in the middle of the road and to the sides for pedestrians. During this work, a bike trail and trail connection were added below the bridge. (Photo provided)

“They’re a good warning device for drivers when there’s a pedestrian in the crosswalk and an added level of safety enhancement,” Newman said.

The signs are also at railroad crossings and alert trains that a bicyclist or pedestrian is crossing.

Secondly, the Santa Clarita Public Works Department also widened the Newhall Ranch Road Bridge, which runs over San Francisquito Creek. This added an additional lane in each direction and barriers in the middle of the road, as well as to the sides for pedestrians. There’s also a bike trail and trail connection below the bridge.

“On one side there was already an existing under crossing, so somebody that wanted to get from one side of the trail across the eight-lane roadway could go underneath the road along the river and come up on the other side,” Newman said. On one side, we didn’t have that connection when it was originally built. That connection wasn’t there.”

So in the process of widening the bridge, they were able to add the second connection.

The goal of this project is to keep pedestrians and cyclist safe in such a highly trafficked area.

With so many different successful projects going on, Newman said a key for the Santa Clarita Public Works Department has been planning ahead.

“We coordinate that or work with each other as we’re developing the plans early on,” Newman said. “Each individual doesn’t work in a little silo here. So it’s about communication and sharing information and spending the time making sure that the planning effort (is solid) going into it.”