The previous ordinance in New Braunfels required a minimum of 40,000 square feet in order to keep fowl. However, Bryan Ruiz, planning and community development environmental services manager, explained how the city chose to review the original ordinance. “The (new) ordinance came about in response to direction from the council at the end of 2012 due to citizens requesting to have chickens within the city in small residential lots.” 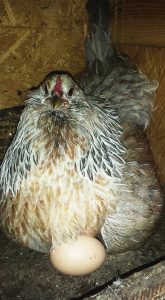 One of the greatest benefits of keeping backyard chickens is the ability for owners to collect their own eggs. This promotes a greener, healthier lifestyle as well as self-sustainability. (Photo by Nicholette Carlson)

City staff members began to review ordinances from other jurisdictions in response to the requests from residents. Throughout this research, the city also noticed the positive effects of the growing nationwide trend toward local, sustainable food production. This trend helps create a greater sense of community while providing education, particularly for children, on food production and origins. It also endeavors to diminish some environmental concerns, such as energy and transportation costs, associated with modern farming practices.

The city’s amended urban chicken ordinance was adopted in 2013. “The ordinance allows citizens residing on a single family and/or dual family residential lot the ability to care for and keep, once registered and properly confined to an enclosure, which is located at least 30 feet from a neighboring residential, with that enclosure located a minimum of 10 feet from the adjacent property line, no more than four chicken hens on lots encompassing less than 40,000 square feet in area,” Ruiz stated.

In line with the positive effects for the city, the amended ordinance allows residents to collect eggs from their backyard and supports those who are choosing to live a greener, healthier lifestyle by keeping their own chickens. This new ordinance is also in line with setback practices in other area municipalities.

In case of potential chickens at large, or straying from the owner’s yard, chicken owners must register with the city either via phone or email. If a chicken does stray, animal control officers are able to conduct field redemptions to registered owners.

Health concerns were another potential worry. Ruiz expounded on this, “Animal welfare concerns involving the raising of chickens in an urban setting include mites and lice, salmonella, enteric bacteria, fowl pox, avian influenza, avian tuberculosis and coccidiosis, a protozoan infection.” However, no issues have been reported thus far.

Since the chicken ordinance went into effect six years ago, 48 residents have registered as chicken owners. The state as a whole is also moving toward more sustainable living. There is a proposed state bill that would allow up to six chickens on small residential lots.