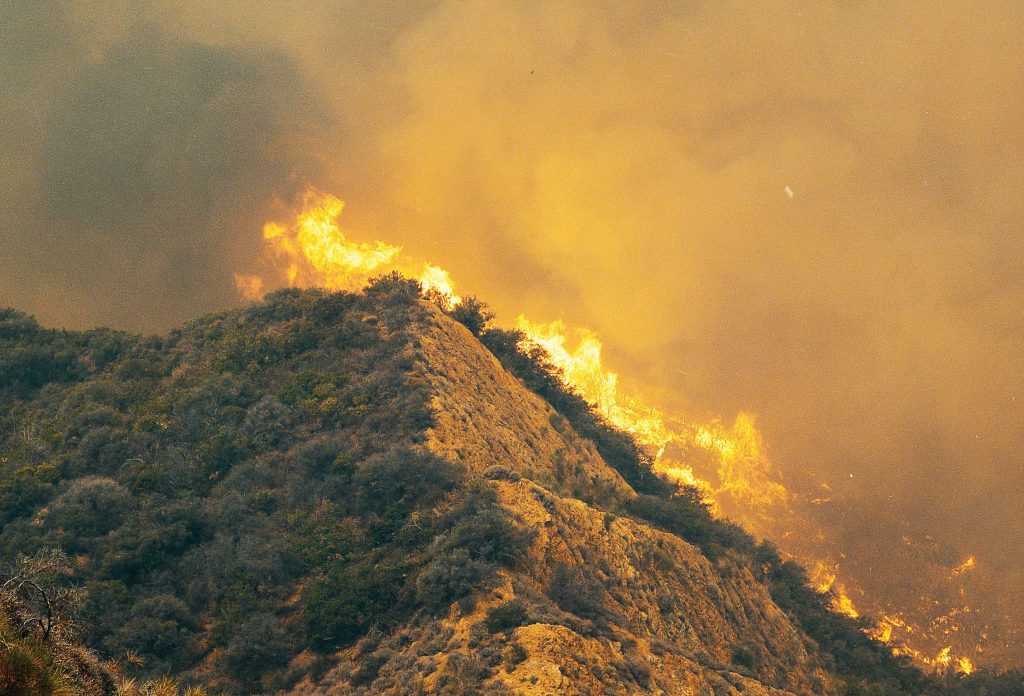 While fire suppression is extremely useful and necessary, it can cause a buildup of underbrush, which can make wildfires larger and more powerful than seen previously.
The most common natural cause of wildfires is lightning. (Photo provided by USDA Forest Service, Missoula Fire Sciences Lab)

The United States Forest Service’s Fire Sciences Laboratory in Missoula, Mont., has been providing the forest service with research and development since 1960. As the only federal research lab focused on wildfires, its research directly aids in the management of wildfires not just in the Rocky Mountains region, but across the U.S. and even internationally. 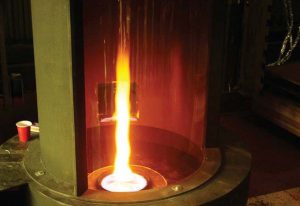 The U.S. Forest Service’s Fire Sciences Lab in Missoula, Mont., has a variety of ways with which the employees and research scientists can study wildfires. In the lab, they are able to create a fire whirl, which is commonly seen during wildfires. A fire tornado seen by multiple individuals, on the other hand, is very rare. (Photo provided by USDA Forest Service, Missoula Fire Sciences Lab)

With approximately 65 year-round employees and between 10 to 15 research scientists, the Fire Lab studies the science of wildfire ignition, behavior and spread. Greg Dillon, acting deputy program manager, described the variety of components that goes into wildfire studies such as those who study fire ecology or “the dynamics of fuels in those environments.” Chemists and atmospheric scientists focus on how wind flow affects a wildfire. The lab uses a burn chamber and a wind tunnel in order to study these aspects.

In response to the smokejumpers in the fatal 1949 wildfire, both fire research and fire suppression became a priority. “Wildfires and wildfires with extreme behavior have always been a part of western landscapes,” he commented. In the past, smaller wildfires would burn more often. Dillon explained that a consequence of continued fire suppression to reduce the number of wildfires is, when a wildfire starts, there is more underbrush, which creates an increased fuel source. He continued, “All it takes is the right weather conditions and one ignition.”

Dillon remarked, “Lightning is the most common natural cause for wildfire.” While ecosystems are traditionally adapted to wildfires, even they are now being affected. “Increased amounts of fuels burn so hot that it can remove the seed source, which would normally naturally repopulate the area,” he revealed. As the human population grows and begins moving into the woods and forest, the effects of wildfires are becoming more of a concern. Previously a fire would have simply burned through an uninhabited area, but today it is burning down homes and buildings. 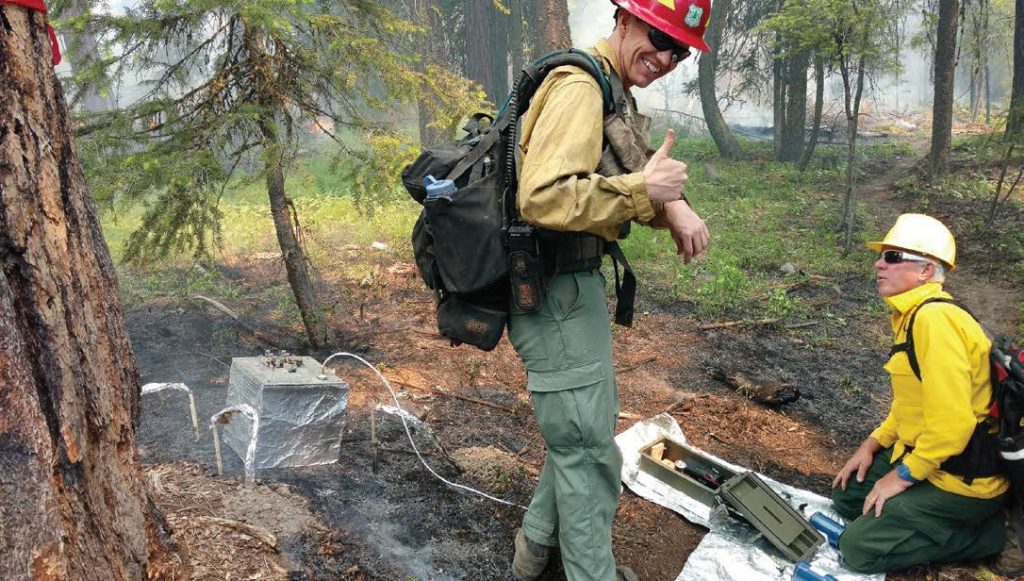 Wesley Page, forestry technician, and Steve Baker, chemist, conduct research on smoldering fires. They are measuring the temperature at specific depths and consumption while collecting emissions samples of smoldering duff after a prescribed fire has burned through a small experimental plot in central Washington. The silver box is a portable chamber that fills with smoke for one minute and allows them to calculate the rate of carbon emission per unit area and to characterize the gases collected in the blue bottle. It is part of a Strategic Environmental Research and Development Program-funded study of smoldering combustion. (Photo by Matt Ellis) 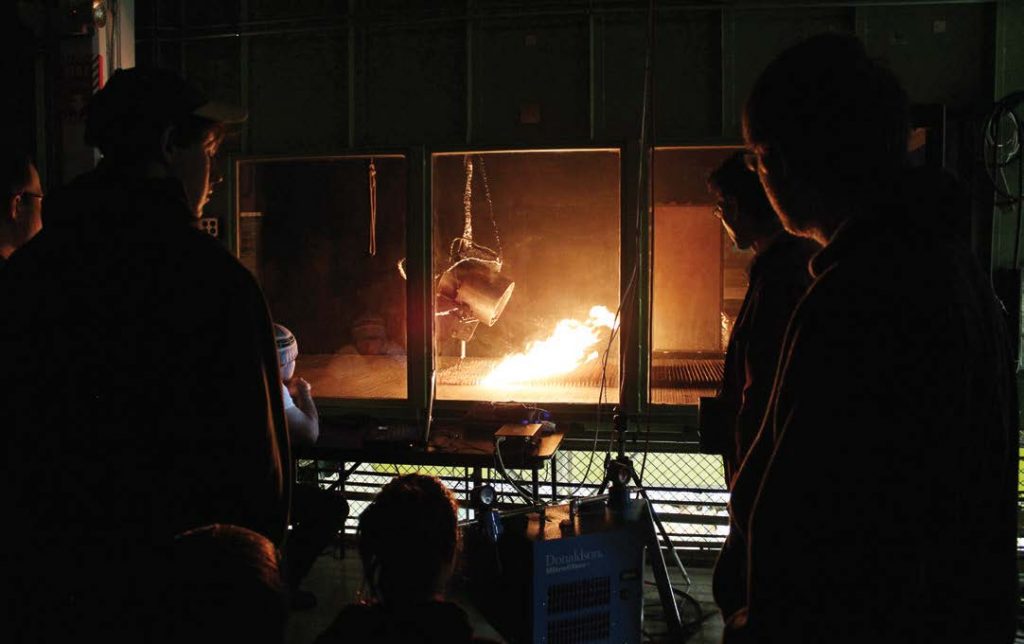 The Fire Lab is the only federal research lab dedicated to focusing its research on wildfires. The burn chamber assists those studying wildfires to see different ways that the wind can affect a fire’s route. (Photo provided by USDA Forest Service, Missoula Fire Sciences Lab)

Affects on a community

Part of the Fire Lab’s research focuses on the hazards and risks wildfires pose on communities. Due to close proximity to burnable fuels and vegetation, towns are suffering the loss of items and buildings. However, it is something that those living in western communities must learn to live with.

The Community Planning Assistance for Wildfire group can use its expertise to help towns create a defensible space and understand risks and trends. CPAW helps to prioritize mitigation efforts, such as fire resistant construction, codes and regulations. “The idea is we’re all in this together,” Dillon emphasized. “People come together and realize it’s a community problem.”

Homeowners can help protect themselves by creating their own defensible space around a home ignition zone. This includes cleaning the gutters, roof and yard, removing flammable vegetation around the home and keeping tree branches trimmed back at least 10 feet. “Remove as much of a threat as possible from homes and structures so they don’t have direct flame contact,” he stated. This should all be done within Zone 1, or within the first 30 feet from a home.

Utilizing these methods, “wildfires will exist, but it’s not going to result in tragic outcomes,” Dillon said.

Last year’s wildfires have been compared with the 2001 Christmas wildfire tragedy in Australia since California has vegetation and a changing climate similar to Mediterranean countries. Dillon also mentioned a surreal and eery similarity between the 1910 Rocky Mountain Fires, which wiped out entire “towns” that had been built up, and the 2018 Camp Fire, which destroyed a large proportion of Paradise, Calif. The Camp Fire is considered the deadliest and most destructive California wildfire to date.

Recently the Fire Lab has studied some of the most devastating wildfires that burned throughout California in 2018. Jason Forthofer, a mechanical engineer with the Fire Lab, particularly studied the atmospheric factors that led to a fire tornado during the Carr Fire near Redding, Calif.

Starting on July 23, 2018, a 54 degree difference was observed between the coast and Sacramento Valley. The wildfire was driven by a combination of fuel sources and wind. Fire whirls between 2 and 10 feet are considered fairly common occurrences. Even larger fire tornadoes happen each year, though typically in remote locations; however, there are documented cases of fire tornadoes in both 1949 and 2008. “It is fairly rare to have fire tornadoes with multiple firefighters seeing it and essentially burning in a city,” Dillon explained. 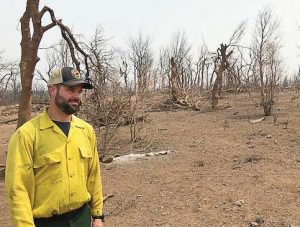 Jason Forthofer, mechanical engineer, stands in an area burned by the Carr Fire, one of the devastating California wildfires in 2018. (Photo provided by Bret Butler, U.S. Forest Service)

Major fire runs occurred with the Carr Fire moving at 25 mph. Near Redding, the wildfire experienced the right conditions to create a powerful fire tornado, which was 1,000 feet in diameter at the base, approximately 40,000 feet high with peak gas temperatures likely exceeding 2,700 degrees Fahrenheit and winds between 136 and 165 mph, the same as an EF-3 scale tornado. In order for a fire tornado to erupt, there must be high-energy release rates, sources of rotating air that were likely caused by the hydraulic jump phenomenon and low to moderate general winds.

Fire tornadoes are so worrisome because they retain energy, are highly unpredictable and can move independently of the wildfire.

As wildfires in urban areas become more prevalent, the work of the Fire Lab is becoming increasingly important.