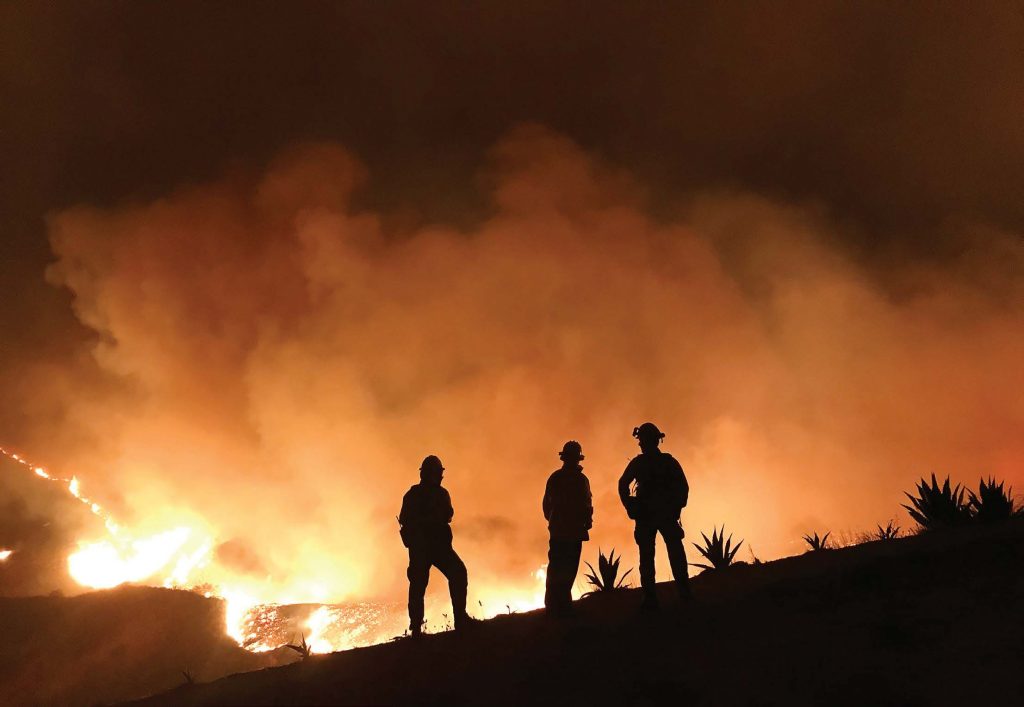 The Thomas Fire in Ventura, Calif., was, until 2018’s fires, the largest California wildfire, encompassing roughly 281,000 acres and moving one acre per minute with 80 mph winds. (Photo provided)

Although it’s difficult to be completely prepared for the variety of natural disasters that might hit your community, there are things that can be done to keep your fleet on the road and able to respond.

No matter where you live in this great nation, there’s a possibility of natural disasters — hurricanes, tornadoes, wildfires, snowstorms and floods — and while some of these disasters have people fleeing the area, municipal workers and first responders have to stay and deal with the disaster and its aftermath. 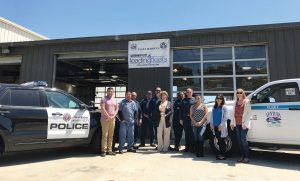 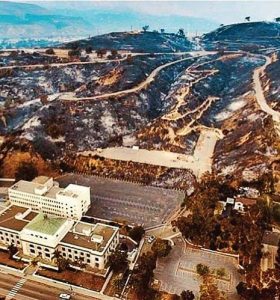 During the Thomas Fire, there was the miraculous evacuation of 27,000 people, or 25 percent of Ventura, Calif.’s, population, to safety all within a few hours. Pictured is some of the damage done in a neighborhood off Foothill Road. (Photo provided) 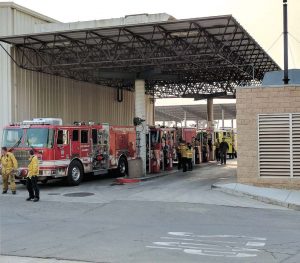 This photo shows the fueling of mutual aid agencies’ fire apparatuses during the 2017 Thomas Fire in Ventura, Calif. Twenty-two states provided mutual aid. The Ventura fleet team provided food, water, coffee and other necessities besides fuel to the responding agencies during this massive fire. (Photo provided)

A community aware of the importance of preparation is Ventura. It withstood the Thomas Fire in December 2017 — the largest wildfire in California’s history until the recent 2018 fires.

She said Ventura has 406 vehicles in its fleet and aside from wildfires also has to deal with earthquakes, flooding and mudslides.

Mudslides are a consequence of the wildfires as the destruction of trees and brush creates erosion. When heavy rains come, the additional debris is not held back, and the layer of ash on top of hardened land is slick and more prone to sliding.

Ivers said when it comes to preparing for emergencies like the devastating fires that hit the community, communication is critical.

“Make sure that you have good communication and two-way radios,” she said.

Knowing the staff ’s shift availability and having a plan in place so that everyone knows their assignments in the event of a disaster is of paramount importance. Ivers said that was helpful during the Thomas Fire.

“We also make sure we do proper preventative maintenance on our vehicles and have enough gas and diesel fuel.”

During the Thomas Fire, the fleet had to put those contacts in place. It also got emergency generators, which required filling. She said the department has a 100-gallon fuel tank on the back of a truck and has used it to fill the generators.

The current fuel emergency service contract is with Los Angeles, about 60 miles away.

“They trucked fuel in and kept us supplied every day,” she said, noting there was a local supplier, too.

Ventura also has an on-site shop to have tires and spare parts on hand. Additionally, there is a mobile mechanic who can be sent into the field if someone experiences a breakdown.

The GPS that is installed in Ventura’s fleet is helpful in a variety of ways: It helps identify where the trucks are in the midst of an emergency and aids with the cost of recovery.

GPS has collected data, including where the equipment was used and for how many hours, that is necessary for the Federal Emergency Management Agency.

Ivers said in storm events, whether it’s a snowstorm or heavy rain storm, GPS identifies what roads are closed and which are cleared. As a board member for the APWA, she “hears the stories” and knows for those in the north that deal with snow, being prepared means is there enough salt for the trucks, is the equipment ready and where are the blades for the snowplows?

When dealing with wildfires where fires are on both sides of the road and sometimes leaping across the road, she said workers “have to use precaution and safety measures. If they’re not police or fire, they should use different access roads.”

Public works personnel have had to assist with evacuation, road closures and removing debris and mud. She noted that there is an evacuation route listed on the city’s website.

Ivers said regardless of the type of natural disaster, the lessons she’s learned have taught her three things.

Fuel supply plays a big part in disaster response and management, and Ivers said while there’s a school of thought of only keeping tanks half full, she believes in making sure they are full at all times.

“It’s just a good practice to be prepared. It’s easy to think ‘I’ll do it tomorrow,’ but you never know what will happen in the middle of the night,” Ivers said. 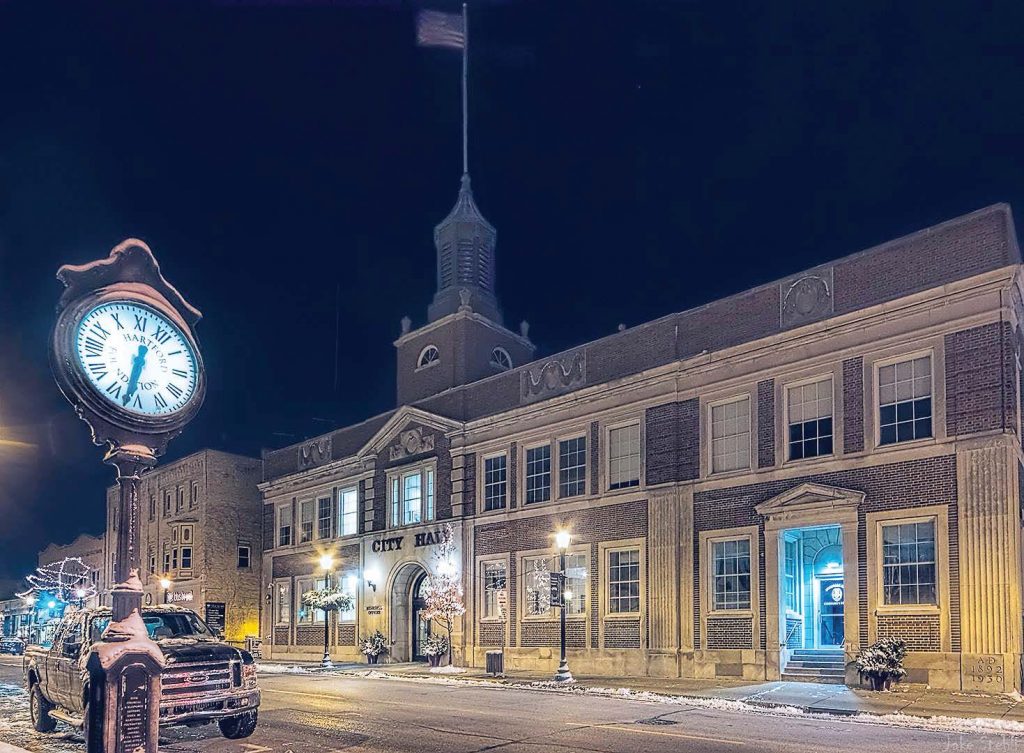 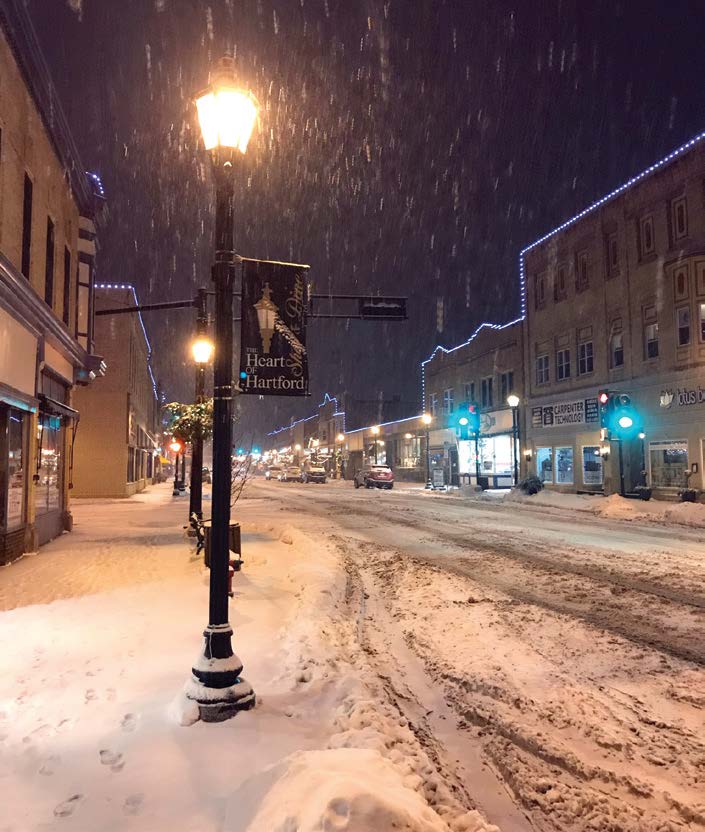 The city of Hartford, Wis., is blanketed in several inches of snow from a winter storm in January. Snowstorms are one of the natural disasters that the Midwestern city has to be prepared for in the winter months. (Photo provided)

A couple of thousand miles away from the city on the Pacific Coast is Hartford, Wis. — about 35 miles north of Milwaukee. The natural disasters might be different — tornadoes and snowstorms versus wildfires and mudslides — but the practical preparation is the same.

Public works Director Darryl Kranz said having the proper equipment and doing regular maintenance on that equipment is key for them. They check everything on the vehicles monthly.

Having a full-time mechanic on hand is helpful in keeping the equipment properly maintained and ready for whatever might come at them.

Kranz also praised city administration and the city council for making sure the department has the equipment it needs. He said they’ve been real good when a request is made for equipment, usually readily approving it.

Kranz said when it comes to natural disasters, “first we pray it misses us, but if it doesn’t, we’ll be ready.”

He said the town was hit by a tornado a couple of years ago and a lot of communities came to help. Recently, the city of Columbus, about 20 minutes away, was hit with a major wind shear that took down thousands of trees, and Hartford employees went to help remove trees and debris.

When asked if the city had mutual aid agreements, he said it didn’t for public works. He said an organization began a few years ago that was trying to create those types of agreements, but it wasn’t kept up.

“Fortunately, we live in an area where there are several small communities and everyone comes together to help,” Kranz said.

Having a written agreement is fine, according to Kranz, but, “Sometimes what’s needed is having someone with common sense who will take action and respond.”

Bottom line, Kranz said, “If we do get hit and we’re not ready, that’s on me so we’ll be ready.”

Take the advice of these public works administrators — and the Scouts — and always “Be Prepared.”