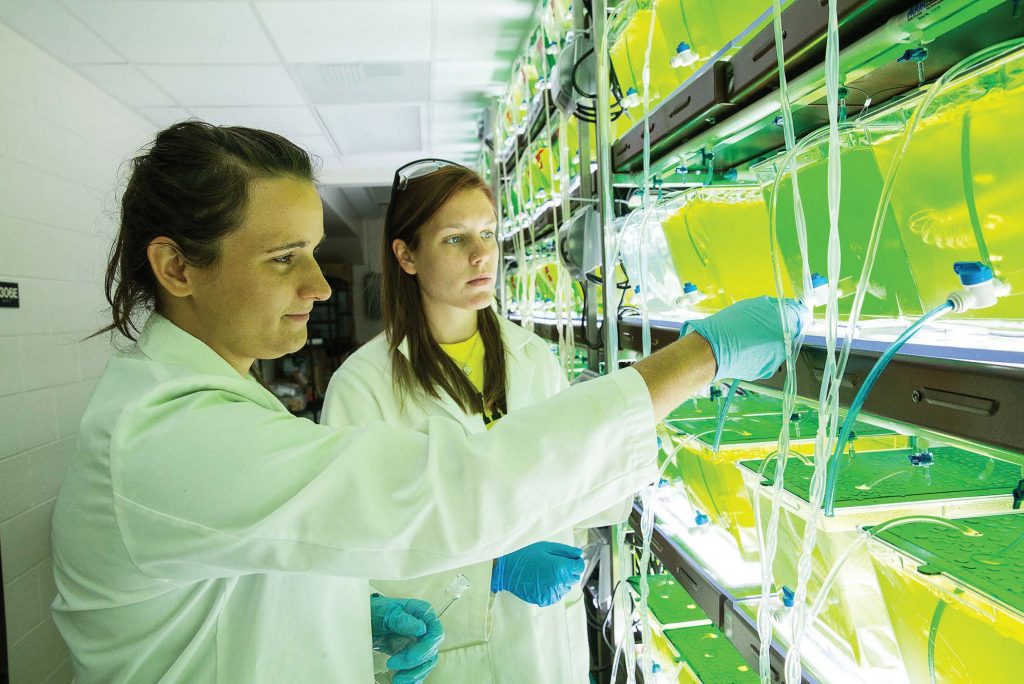 The University of Michigan team has been growing multiple species of algae in the same environment, testing if whether one species declines or faces a challenge, another would take its place and compensate for the shortcomings. (Photo provided)

The search for a reliable, sustainable and fiscally sensible alternative biofuel has been long in the making, and Professor Brad Cardinale of the University of Michigan, along with a team of researchers from universities across the country, believe they’ve almost got the process down using a less conventional source: algae.

Cardinale’s team focuses specifically on converting algae into a sustainable biofuel from feedstocks in outdoor ponds, which then can be converted into refined fuel that runs in an environmentally friendly way in diesel engines.

“Biofuels are going to be a component of a renewable energy portfolio across the world,” Cardinale said. “Although we all accept that most renewable energy will be based on solar and wind power, there are portions of transportation in the energy sector that you can’t get batteries in, like planes, and we’ll need renewable fuel sources for those.”

His project is funded by a $2 million grant from the U.S. Department of Energy. The goal is to create biofuels that work in existing diesel engines to reduce greenhouse gas emissions by 60 percent compared to normal diesel fuels while improving engine thermal efficiency beyond the baseline diesel engine. 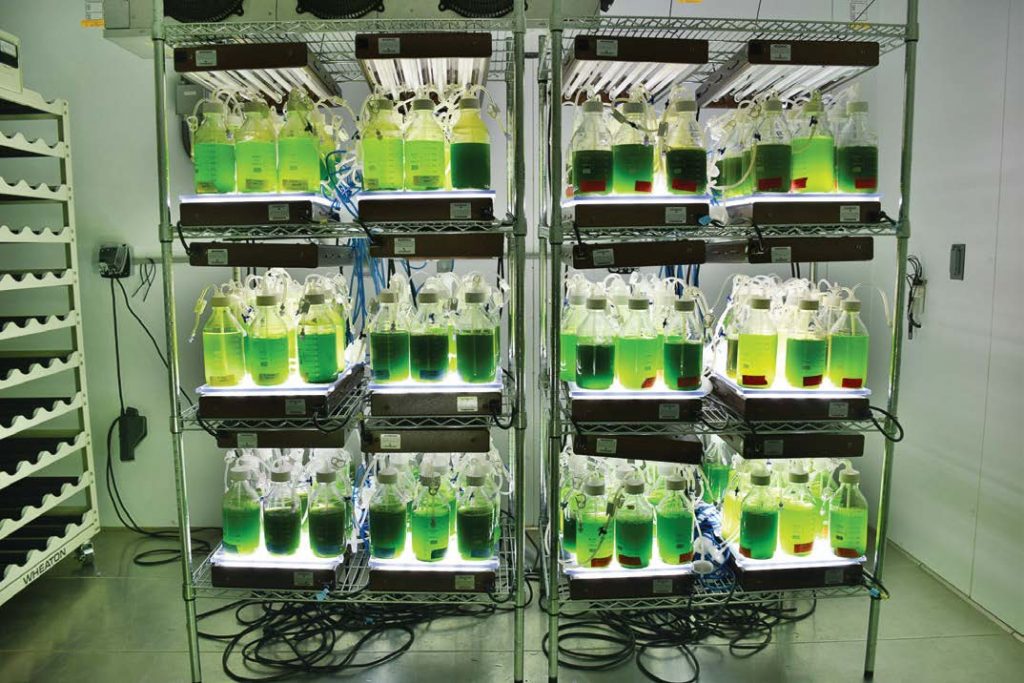 Pictured are algae samples at the University of Michigan. (Photo provided) 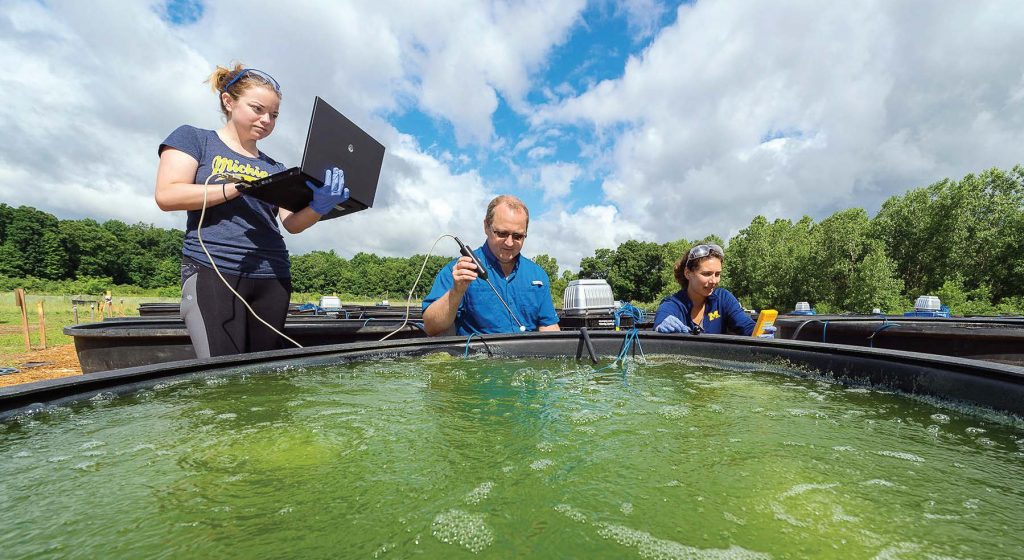 Funded by a $2 million grant from the U.S. Department of Energy, U of M aims to create biofuels using algae that work in existing diesel engines, ultimately reducing greenhouse gas emissions by 60 percent compared to normal diesel fuels. (Photo provided) 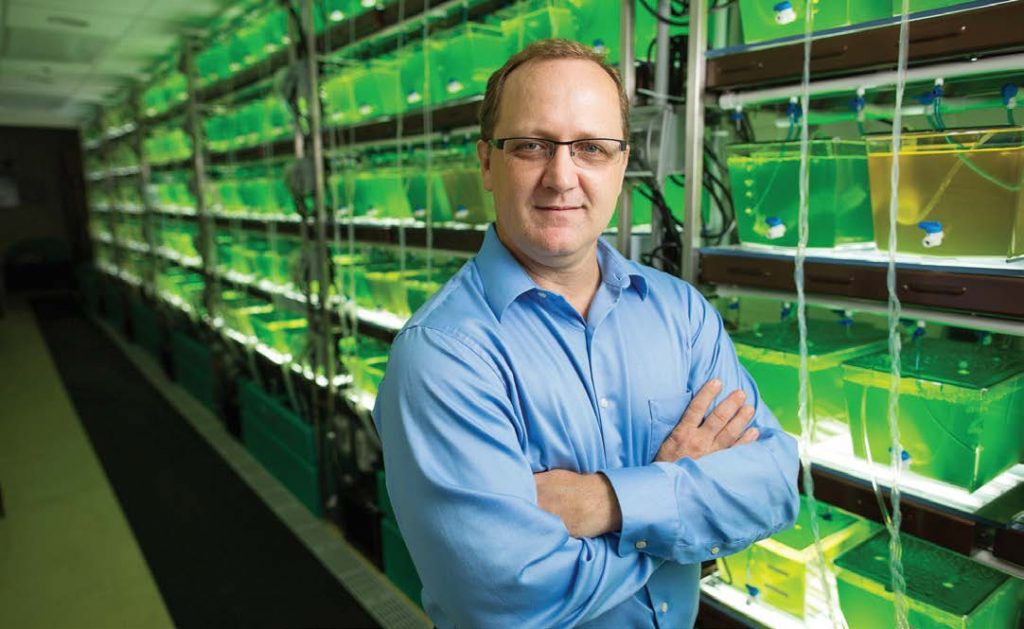 Professor Brad Cardinale of the University of Michigan 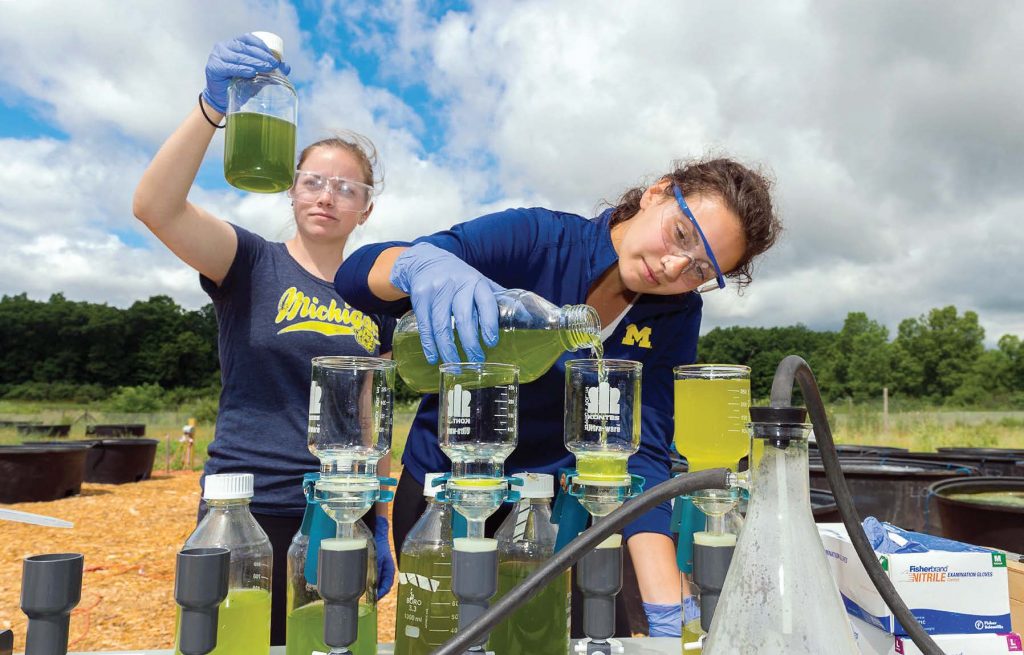 University of Michigan researchers, along with researchers from Penn State University and the University of Delaware, have completed the research and development needed to identify the species groups that work best together in small ponds. (Photo provided)

“The problem is you face water issues — evaporation in hot areas, mainly,”

Cardinale said. “The single biggest bottleneck to making algal biofuels sustainable, both environmentally and economically, is that as soon as you take genetically modified strands out of a lab and into nature, they do terribly. Ponds crash because they become diseased, competing algae gets involved and takes over, things like that.”

According to Cardinale, the key to success is finding the perfect balance of algae species that can work together to grow despite ever-changing ecological conditions.

“The biggest problem is growing things for a long period of time sustainably. Over the past four years, we’ve been working at U of M to use ecological design to overcome this problem,” Cardinale said. “We take principles developed from the science of ecology and use them to build a better and more sustainable system.”

Cardinale said the concept his team is exploring is growing multiple species of algae in the same environment so when one species declines or faces a challenge, another can take its place and compensate for the shortcomings.

“All we’re doing,” he said, “is finding groups of species that grow together that cannot overcome a problem individually but collectively can face them all.”

So, what’s the draw of algae if other biofuel sources, like corn and soy, already exist in mass quantities?

“The draw of algae is you can grow a lot more in a smaller space than corn or soy,” Cardinale said. “If you were going to use a terrestrial crop, you’d have to dedicate a very large portion of the Midwest to growing crops not for food, but for biofuel. The immediate concern there becomes where to grow food or having to import food production from somewhere else. However, if you were to use algae, you’d take a small chunk of land that barely registers on a map and be able to grow all that you’d need in that space.”

So far, Cardinale’s research team at the University of Michigan, along with researchers from Penn State University and the University of Delaware, have completed the research and development needed to identify the species groups that work best together in small ponds. The Department of Energy grant allows them to take this research to the next level.

“We’re now able to head into step two of this process, which is a demonstration project where we take these groups we’ve identified to Arizona where the Department of Energy has space for us to grow these in real-life, very large ponds,” Cardinale said.

Once that research is complete, the team will look beyond the production of algae.

“It’s one thing to say ‘let’s get a stable pond where we can produce this algae easily.’ It’s another thing to convert the algae into fuel to run a system,” Cardinale said. “We now have all the people lined up to generate the feedstock, convert it to a biocrude, upload it into an engine and test to see if it works.”

The timeline of the next steps of this research is about six months, Cardinale estimated. In terms of widespread use, within the next few years isn’t out of the realm of possibility.

“We’ll be growing these feedstocks, converting them into oil and putting them in an engine starting in 2019,” he said. “It’s not unrealistic to think that if there’s economic demand and we had an administration in the United States that supported reusable fuel, this could be a reality on a small scale five to 10 years from now.”