Thousands of ships have averted disaster on the treacherous shores of Block Island, R.I., thanks to the two lighthouses that bookend the Atlantic tourist haven a dozen miles south of the mainland.

The town of New Shoreham, coterminous with the island’s 7,000 acres, boasts slightly more than 1,000 year-round residents, but welcomes up to 20,000 seasonal visitors a day.

The lighthouse at the northern tip of the island was the first to be built. The current structure, completed in 1867, is the fourth incarnation of the original lighthouse.

In 1829 Congress appropriated $5,500 to build a lighthouse at the northwest extremity of the island, but after a few years, the structure was swept into the ocean from the erosion of its sand and gravel foundation.

Congress allotted another $5,000 in 1837 for “rebuilding and changing the location” of the lighthouse, which was built 1/4 mile inland.

A new 50-foot granite lighthouse was built on the northern end of Block Island in 1857. Eight years later, piers had to be constructed to stave off erosion endangering the structure and Congress was compelled to spend $15,000 to build a fourth lighthouse.

The current two-story structure, including living quarters for the keeper, went into service Sept. 15, 1867. Its white light was visible more than 13 miles away.

The lighthouse’s new location was a godsend to lonely keepers.

Fishermen and other visitors frequently stopped by, and after a five-year legal scuffle, the island’s postmaster constructed a fishing shanty near the lighthouse.

The lighthouse was automated in 1956 and deactivated in 1973 in favor of a nearby light on a steel tower.

The U.S. Fish and Wildlife Service acquired the station and surrounding acreage in 1973 and the vacated lighthouse languished at the hands of vandals.

New Shoreham established the North Light Commission to preserve the historic landmark and purchased the lighthouse and 2 acres of land from the federal government for $1.

The light was reactivated in 1989 and a museum on the building’s first floor was opened in 1993. Exhibits included the fourth-order Fresnel lens once used in the lantern room and a workbench, chart box and lunch pail used by a keeper in the 1860s.

Corrosion of the lighthouse’s iron infrastructure, discovered during a 2001 inspection, prompted the removal of the tower. Repairs costing $500,000 were made while a temporary light was put into service.

The building was restored as a navigational aid with a relighting ceremony under a full moon on Oct. 23, 2010, with the historic Fresnel lens taken from the museum and reinstalled in the lantern room. Its white light flashes every five seconds.

Block Island, which some describe as shaped like a pork chop, is 6 miles long with 17 miles of shoreline.

The Southeast Light was first illuminated Feb. 1, 1875. The 52-foot octagonal brick tower served as New England’s highest light until it was briefly deactivated from 1990 to 1994. The attached 2 1/2-story dwelling contained separate living quarters for the keeper and the assistant keeper and their respective families.

The original optic was a first-order Fresnel lens with four wicks burning lard oil, replaced by kerosene in the 1880s. The lens was modified in 1929 to rotate on a pool of mercury driven by a clockwork mechanism and later an electric motor.

A hurricane in 1938 inflicted severe damage to the structure and the lens had to be turned by hand for several days pending restoration of the mechanism.

Erosion threatened the lighthouse, and in 1993 the entire structure, weighing 4 million pounds, was relocated 360 feet inland, then the largest building in the world to be moved in one piece.

Ownership was transferred in 1992 to the Southeast Lighthouse

Foundation, which operates a museum and gift shop in the structure and offers guided tours to the top of the tower. The light flashes green every five seconds day and night. 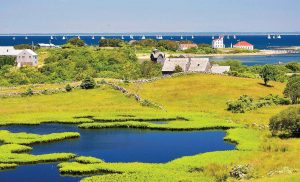 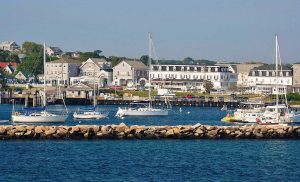 Old Harbor is one of two manmade harbors on Block Island.

The island is accessible by airplane and by ferry from seaports in Rhode Island, Connecticut and New York.

More than 90 percent of the town’s surface consists of water, including 365 freshwater ponds and two manmade harbors. About 40 percent of the island is intentionally undeveloped to accommodate its 30 miles of walking and biking trails.

The popular tourist destination also offers sailing, fishing, beaches and more than 50 restaurants during the summer season. Much of the northwestern tip of the island serves as a resting stop for birds along the Atlantic flyway.