Thıs fuel has been on the market ın some quantıty since at least 2010; however, you might not have heard of it yet: renewable diesel. No, it’s not biodiesel, even though it also utilizes organic materials. Offering numerous benefits, renewable diesel is catching notice from fleet managers, particularly on the West Coast, who are seeking alternative fuels to meet emission standards. Renewable diesel took center stage during a NAFA Institute and Expo session this past April presented by Richard Battersby, interim assistant director of Oakland’s bureau of infrastructure and operations, and Jon Scharingson of Renewable Energy Group. Gary Lentsch, with Eugene Water and Electric Board, served as moderator.

“Back in 2010-11, I got a call from one of our board members from East Bay Clean Cities Coalition and he does a lot of work overseas,” Battersby recalled during the presentation. “He’s calling to ask me if I had heard of renewable diesel. I said, ‘You mean biodiesel?’ He said, ‘No, renewable diesel,’ and he explained it to me. I said I had never heard of that fuel before, and we did a little bit of research and the next thing you know it’s out there and available.”

Being in California, he noted they have been exposed to renewable diesel for quite sometime, though it hasn’t been available as a fleet fuel in any quantity prior to 2015. 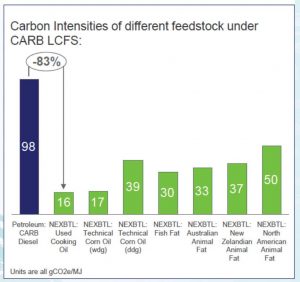 If renewable diesel is produced from 100 percent renewable raw materials, it can achieve an up to 80 percent reduction in greenhouse gas emissions during its lifecycle compared to fossil diesel. (Graph provided)

What is renewable biodiesel?

The feedstocks, the stuff you use to make both biodiesel and renewable diesel out of, are exactly the same. So triglycerides, any fats and oils — used cooking oil, animal fat, soybean oil, canola oil — those are the different feedstocks that we use in both our renewable diesel and biodiesel plants. But the process is significantly different,” Scharingson explained. “Basically a renewable diesel plant is like a crude oil refinery. It’s a hydrocracker. It’s a very intensive heat process. They’re very expensive to build and take a long time to build. And you actually add hydrogen to that triglyceride, run it through the cracker and on the back end what you have are paraffins with propane and naphtha being the byproducts.”

Biodiesel, meanwhile, is produced by transesterfication, which converts fats and oils into biodiesel and glycerin.

“(Renewable diesel) is a fuel that you can really start running in your equipment overnight,” Battersby said. “You don’t have to drain your fuel tanks. You don’t have to flush them. You don’t have to make any equipment modifications. It blends equally well with petroleum diesel or biodiesel — it’s literally as simple as picking up the phone and calling your supplier and say we’re going to need some fuel.”

One of the biggest benefits of renewable diesel is the cloud point, according to Scharingson, who noted the molecule is virtually  indistinguishable from the diesel fuel molecule, and the cloud point is very similar to diesel. Scharingson added, “The cloud point on biodiesel is a bit higher (than diesel).”

Battersby said, “It’s 100 percent renewable, sustainable. It has that smaller footprint. It’s super easy to use — really the process I described.

You’ve got that higher cetane rating, and by the way, if you get push back on alternative fuel, talking about performance is a great way to market this stuff to your drivers. In the case of renewable diesel tell them, ‘this cetane rating is going to give you more horsepower, going to help you off the line.’

“Lower operating costs than other alternative fuels. That’s 100 percent true because along with renewable diesel you have no equipment modifications, no special dispensing or storage equipment. It’s as easy as placing the call and start running it. There is no blending limited; you can run it right up to the RD99. The storage properties are good. Pure hydrocarbon. Odorless.”

“In California not only do we have diesel particulate filters on all of our new equipment, we had to go in and retrofit all of our existing diesel equipment with particulate traps, probably 10 years ago,”

Battersby said. “There was a graduated cycle grandfathering in equipment, but that’s one of the problems with these, especially the aftermarket diesel particulate filters, they plug all the time, especially if you are a municipality. Our drivers don’t get out on the highway very often. They don’t get up to operating temperatures so we’re having to do manual reach-ins.”

However, this can be avoided with renewable diesel. Battersby noted, “Renewable diesel drops particulate matter emissions by 30 percent — overnight. So that translates to a longer duty cycle on your particulate filter, less maintenance, less downtime. It’s going to have a great effect.”

When it comes to introducing renewable diesel to the fleet, Battersby said, “Our particular experience, we’ve been using it since August 2015. No problems noted. We did communicate with the fire department because we’re using it in all of our fire and emergency response equipment that is diesel power — stationary generators. First we put it in our mobile units on the street see how it was going to perform and then we put it in the fire equipment after we were sure it was going to work. But when we were running it in our standard vehicles, we didn’t tell the drivers any different. Once you communicate to them, ‘Hey, we’re using a different fuel,’ guess what? ‘Eh, I’ve got all kinds of problems with my truck.’ So we didn’t tell them.”

To ensure a successful rollout, be sure to use the right additive package; renewable diesel can be just as successful as winterized diesel fuel if you do this.

Battersby stressed the importance of ordering spec winter blend fuel. “There was an issue a year and a half, two years ago with Caltrans (California Department of Transportation) … and they were reporting some gelling issues with their renewable diesel. Come to find out their specifications were not for the winter blend fuel, and they were up in the western slope in the Sierra Nevadas, and it was anywhere from zero to 20 degrees maybe even minus 10 at times.” Battersby added, “If you’re going to have gelling concerns with petroleum diesel, just as you would with any other fuel, make sure you get the winterized version of renewable diesel.”

While renewable diesel sounds like the way to a cleaner, greener fleet, there is a catch: supply. Domestically there is about a  400 million to 500 million gallon production capacity. While this might sound like a lot, the state of California could consume that entire amount on its own.

Economics are driving that distribution, particularly with the incentives being provided by the state, which is also willing to pay the marginally higher price. Scharingson noted, there is also a developing market in Oregon.

However, domestic renewable diesel refineries are rising to meet the challenge of demand.

“Every domestic facility that I’m aware of that is refining renewable diesel is expanding.

They’ve either got the approval and they’re breaking ground or they’ve already got the proposals on the table,” Battersby said. “The bottom line is a lot of folks have noted the popularity of renewable diesel and the success fleets have had running it. It’s great to have the fuel supplied to you, but it’s even better if we can make it here in the United States. So that is what we are getting at.” 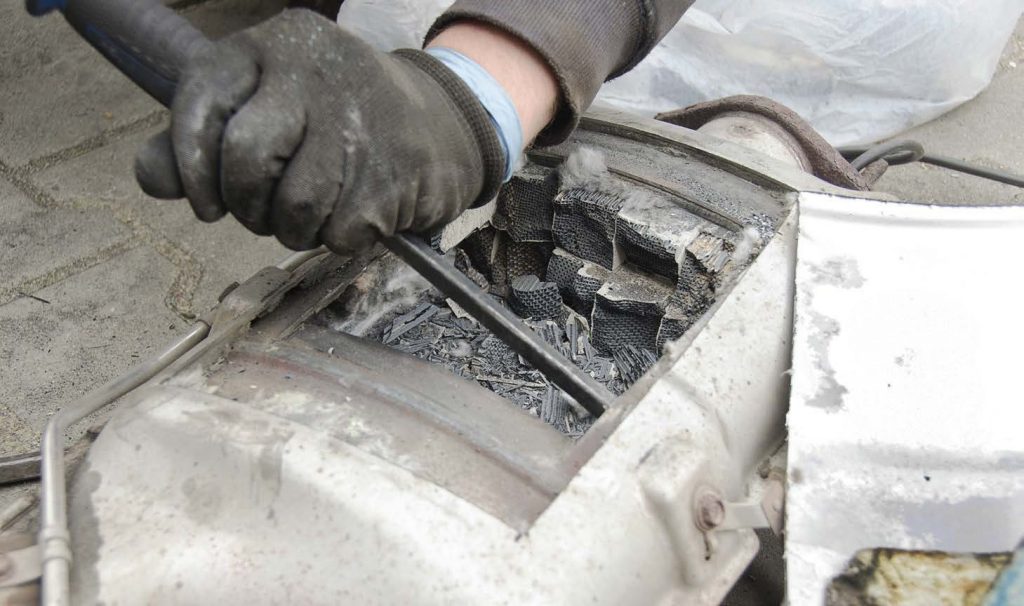 While fleet managers outside of California might not be able to get their hands on renewable diesel in the near future, it is a fuel they should be monitoring, especially in case, the opportunity to try it comes knocking.

In Oakland, the city’s fleet stands to see a 1,600-ton reduction in greenhouse gases annually through the use of renewable diesel.