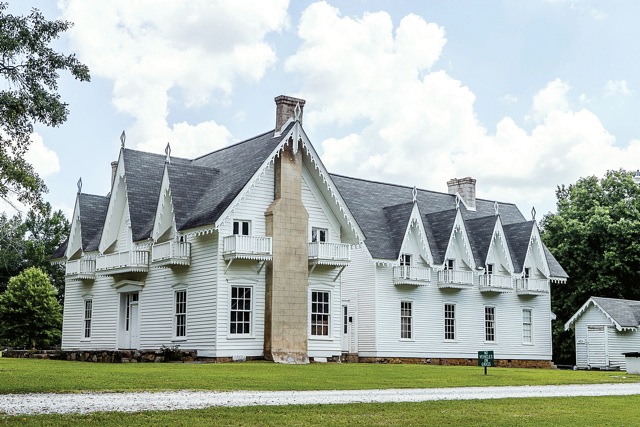 Pictured is the Big House in Opelika, Ala. Legend says that Penn Yonge was stabbed to death on the spiral staircase and died on the 13th step. Visitors are often told to avoid the 13th step. (Photo provided)

Things that go bump in the night fascinate and frighten a wide demographic, resulting in several parks and recreation departments crafting events that revolve around the paranormal. Some don’t even have to try, thanks to local folklore and historic landmarks. Others create their own authentic Halloween events and programs for their communities.

No matter the case, such programs are sure to bring in new and diverse visitors to the area.

For the towns and cities who have no ghosts — or ones that they know of — there’s still opportunity to attract people outside the local area. Towns like Pickerington, Ohio, still bring in thousands of visitors for their one-night-a-year event on Halloween and get the whole town in on the fun.

Despite having no local folklore or legends, Pickerington created the Haunted Village to share the history of the town through ghost stories all over the Olde Pickerington Village. The stories were written by a former employee several years ago and are told on the ghost tours, which take groups to an old haunted house, then the Olde Train Depot and finally the cemetery.

The ghost tours introduce visitors to the city of Pickerington, which may lead them to visit during daylight hours when ghosts can’t attack.

The event also brings together local organizations, churches and businesses to work on different activities such as pumpkin decorating, carnival games, opportunities for trick-or-treating and haunted houses. The historical society will transform the Carnegie library into a haunted museum while a local photographer creates a haunted house out of his shop.

“This is a fun way to showcase our city during the Halloween festivities,” commented Rebecca Medinger, parks and recreation director of Pickerington. “It provides a safe place for everyone to enjoy. Even on cold rainy nights, we still get people who come just for the experience. We get tons of calls from people leading up to the event so they can come and participate in it.”

Through the help of others, the Haunted Village has had great success for the past 12 years. The two-hour event sees about 4,000 visitors and it’s all free. In the future new ideas and features are planned, such as having local bands perform live so the community has the chance to support one another.

In Chesapeake, Va., the Ghost Train at Northwest River Park has been around for over 20 years and has evolved over time. Every year, the event puts volunteers to work creating a theme, constructing a haunted maze and decorating the “haunted woods” that the train goes through. It’s more about having a good time than a frightening one. 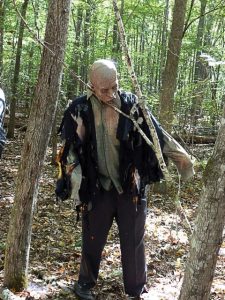 It doesn’t look as scary during the day, but at night most of the props in the haunted woods are animatronic . . . or so they say. (Photo provided)

“People come for a date or a lot bring their kids because it’s fun,” stated Kevin Kaul, parks manager. “Because we’re the city, we have to draw a fine line between gory, nasty and family friendly.”

The event relies heavily on volunteers, sending out flyers for volunteers as early as August so the planning can begin. With the Chesapeake parks department supporting them, the volunteers make it successful and an enjoyable family-friendly event.

Skits are performed in the forest as the ride makes its way through the woods, each one building up to the major skit at the end that ties everything together — leading to an end that forces the train to get out of there at a hectic pace toward safety.

As far as Kaul knows, the Ghost Train is one of the only handicap accessible hayrides in the area, which has received positive feedback from visitors.

One of the things that makes the ride appealing to the public is the way it’s set up to serve visitors. Rather than having to wait an unknown amount of time for the next ride, visitors can buy tickets for specific times. It has been a good model for Chesapeake and attracts people from the seven cities area. Since the city is located close to the state line, it isn’t uncommon to see people travel from North Carolina for a good time.

“People come back year after year and bring their kids,” Kaul said when asked how the event has impacted the community. “It’s been going on so long, we’ve had people bring their grandkids. It’s become a tradition for some people.”

On the last night of the event, volunteers let their hair down, change up the skits, bring music to play songs like “Thriller” and dance around to celebrate the end. As volunteer-fueled activities can cause a lot of stress, this serves as a way for them to blow off steam and go out with a bang.

“We’re an outdoor event. One of the biggest challenges is the weather and attracting dedicated volunteers. We go on, rain or shine, unless it’s really bad,” he explained. “Volunteers have to stand in and endure that rain, so they really have to want to be there. Because we’re so dependent on volunteers, we don’t do a rain date. They’ve already committed for a certain amount of days.”

A legend surrounding the “Big House” in Spring Villa Park in Opelika, Ala., is that in 1878, a plantation owner named Penn Yonge was stabbed to death. The story goes to say that despite Yonge having been respected in the community, he was vicious to slaves and that ultimately led to his death.

Visitors are able to stay in the house overnight, which ultimately attracts paranormal groups that are interested in visiting locally haunted areas to see what they can find. 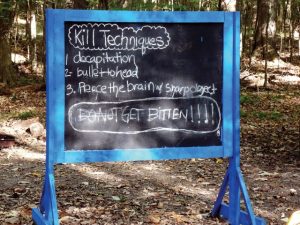 The Ghost Train in Chesapeake, Va., has hosted themes from zombies to pirates. Be sure to follow the rules, or you may never come out of the woods. (Photo provided)

While the existence of the paranormal is up for debate, the local community, visitors and a few individuals from the Opelika parks department have witnessed some strange unexplainable happenings that cannot be countered with logic.

Despite local legends, the parks department decided not to capitalize on that aspect and just leave it for paranormal enthusiasts to discover. Instead, they took the route that made such an impression on the community and visitors, they still receive calls a decade later.

It was no normal hayride that once took place on the Spring Villa property. It was a hayride that went on over the course of four days and brought in 8,000 to 10,000 visitors. The line went past the Big House, which had spooky things going on inside to entertain people as they waited.

The ride itself was beyond ordinary as the trail had detailed decorations made by the parks department staff. There were also people zip lining out of the woods for jump scares, spiderwebs made from fishing lines that would brush the skin just enough to invoke goose bumps and it was an economical event that didn’t charge an arm and leg for a bit of fun.

To the horror of the community, the famous hayride was discontinued due to staffing constraints — one of the challenges of having such a large facility but a small city.

“We still get phone calls to this day, asking if we’re doing the hayride,” Public Relations Coordinator Laura Leigh Chesser said. “We did it really well. People enjoyed it and used to travel from all over to come to it.

“Our motto is that if we’re going to do something, we’re going to be the best at it and that’s what we did for the hayride. We miss out on the visitors that would’ve come for that event. Because the hayride was so popular, there was a whole grieving process.”

The parks department then implemented a Halloween event in place of the hayride a few years later by partnering with the local bicycle advisory committee, which was looking into setting up a bicycle event. Decorations from the hayride then found use in the Tour de Fright and haunted house.

With eerie, glowing pumpkins, creepy mannequins and a graveyard scene lining the way, locals jumped on the chance to partake in another Halloween outlet. The ride brings in about 200 kids a year and also welcomes parents who can accompany them or push strollers around.

“My advice would be make your event economical,” Chesser recommended. “Make people really enjoy it and want to come out to it. The haunted house is only $5 and the Tour de Fright is free. It’s just a way for people to get out and enjoy everything as a community during that time of year.”