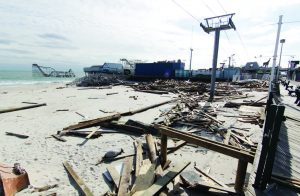 Hurricane Sandy hit the New Jersey Shore hard and devastated coastal towns like Seaside Heights. The boardwalk and amusements were destroyed, as shown in this photo, with sections of one of the iconic roller coasters sitting in the Atlantic Ocean. (Photo provided) 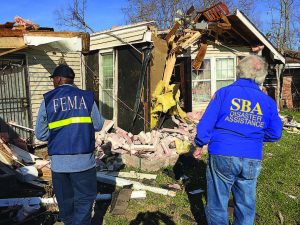 Teams of representatives from the Federal Emergency Management Agency, Small Business Administration and state of Louisiana survey the damage from a tornado in New Orleans in February of 2017. Once disasters like this happen, it’s important to document all expenses in order to be reimbursed and to pass a federal audit. (Photo provided) 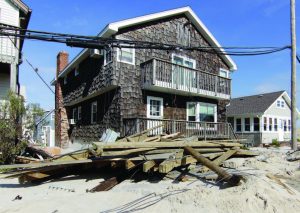 Homes along the beach in Seaside Heights, N.J., had downed utility lines and piles of boardwalk planks in their yards — if they were lucky enough to escape being damaged in the devastation left from Hurricane Sandy. The borough along the coast had a double whammy when several months later a fire took out nine blocks of boardwalk. (Photo provided) 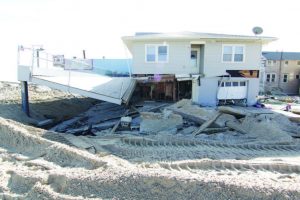 Structures along the coast of Seaside Heights, N.J., suffered damage from the winds that came with Hurricane Sandy. City officials knew to start documenting damage and expenses from the first minute the storm came so that they could be reimbursed from FEMA. The state passed a FEMA audit and Seaside Heights officials feel confident they will as well, but for now, they are still turning in requests for reimbursement. (Photo provided)

Just like it does for the Scouts, the motto “Always Be Prepared” can serve city officials well — before, during and after a disaster — so expenses can be recouped from the Federal Emergency Management Agency.

Unless you reside in a community that’s prone to tornadoes, hurricanes or blizzards, officials might get a little comfortable with an “it can’t happen here” mindset.

But as Tom Ed McHugh, former mayor of Baton Rouge and former executive director of the Louisiana Municipal Association, said, “Natural emergencies occur no matter where in the country you live. It’s so easy to think, ‘not gonna happen here,’ but it’s crucial to realize it does, and in this day and age with the threat of terrorism on top of natural disasters, one has to be prepared.”

McHugh also pointed out, “If you think about those who usually are elected into a municipal position, they’re from all walks of life and generally not experienced with emergency management and federal reimbursement.”

With that in mind, McHugh said it’s crucial that they have competent people in positions of emergency management, all of whom are aware of the three phases of disaster preparedness — the preparation phase, the planning phase and the recovery phase.

“It’s all about knowing what to do and how to do it,” he said, adding that when he was mayor of Baton Rouge, he and other officials learned that vendors, who they worked with on a regular basis, could be helpful in a disaster by having pre-approved contracts with them ready to go.

“If you wait until you have an emergency to decide what to do, you’ve already dug yourself into a hole,” he said.

In the state of Louisiana when a storm moves into the gulf, cities already start to make plans, according to McHugh.

Examples of the preparation phase include having mutual-aid agreements in place with neighboring first responders; having those pre-approved emergency contracts with vendors ready so they can help in those first hours; and having local ordinances in place that address things that may come up during an emergency. All of these pieces will help during the disaster and afterwards when dealing with an audit.

McHugh pointed out that there are those in certain levels of government who work constantly in a storm situation, putting in an extreme amount of overtime and who, under normal circumstances, wouldn’t be paid overtime but could be if there was an ordinance in place ahead of time.

“You can’t make that decision on the fly; you have to have an ordinance that states someone in a salary position who, under normal circumstances, wouldn’t get paid, under these specific circumstances, they would. If you have such an ordinance, you may get reimbursed by FEMA,” he said.

Usually anything that is pre-approved by working with federal and state officials more than likely will be reimbursed as long as it’s documented, McHugh added.

For smaller communities that can’t afford a full-time emergency manager, he advised, “Usually there’s someone on staff that has some interest in it — just do the best you can.” He also suggested to do so while eliciting support from county and state officials who would be more well versed in these matters.

One of his biggest pieces of advice for acing an audit is to stay on top of all those expenditures as they are occurring, including hours worked and even volunteer hours.

“Start documenting even before you know whether it’s going to turn into a full-fledged disaster,” McHugh said. “Then you’re prepared.

If it doesn’t turn into something big, you’re ok. If you document while it’s happening, you’ll find you’re in a much better position to respond to whatever questions auditors come up with.”

Both McHugh and Brett Kriger, deputy director of disaster response for Louisiana Municipal Association, said when it comes to storms and other natural disasters, it’s not a matter of if you’ll be audited, it’s a matter of when.

One community that feels it is ready for that anticipated audit is Seaside Heights. It had been heavily damaged in Hurricane Sandy, which in October 2012 caused historic devastation and loss of life.

According to the Department of Homeland Security’s Office of Inspector General’s report, it was the second largest Atlantic hurricane and the amount of debris was unprecedented, leaving parts of the state inaccessible. Seaside Heights was among the 565 municipalities where a state of emergency was declared.

“We had a series of audit preparation meetings to make sure we had our files together,” he said.

As to how the borough’s officials prepared ahead of time, Vaz said, “We hired a consultant, an organization that helps with all of our projects and works in emergency management and with the state police. In a small town like Seaside Heights, we need help from an outside consultant.” He added, “We’re lucky to have these people available with the experience they have. They have a certain expertise with storm management and FEMA policies.”

Vaz would advise small communities like theirs to have a contract in place before an emergency occurs. He said these companies have spread sheets and software to document everything needed during these types of disasters.

“They’re a great level of support, especially in the first hours of crisis, because you have to document everything from the first minute,” he said.

Seaside Heights was hit with a double whammy. Nine months after Hurricane Sandy, a fire took out nine blocks of boardwalk. Vaz said it was determined that the fire was a result of damage caused by Sandy.

“Hurricane Sandy had a causal effect so it was a second punch for us. We’re still submitting reimbursement requests,” he said.

By working closely with state officials and their expert consultants, Seaside Height officials feel prepared, according to Vaz. “If a storm is barreling up the coast, we’re on the phone with our consultants.”

He acknowledged that cities that get hit regularly with natural disasters probably have internal staff to deal with these things.

“The Jersey Shore was not as well prepared for a monster storm like Sandy,” he said.

Example of a checklist provided at an applicant kickoff meeting

Deputy Director of Disaster Response for the Louisiana Municipal Association Brett Kriger provided an example of a simplified checklist of items needed for an audit given at an applicant briefing.

3.) Materials: accurately completed material summary records; itemized invoices and/or receipts for all items including, but not limited to clear descriptions of items purchased (e.g., serial numbers or other identifying information) costs, dates, vendors and invoice/receipt numbers.

4.) Rental Equipment: accurately completed rental equipment summary records; itemized invoices and receipts for all items, including but not limited to clear descriptions of items purchased/rented (e.g., serial numbers or other identifying information, costs, dates, vendors and invoice/receipt numbers); copies of all rental agreements/contracts.

6.) Procurement: documentation indicating that either state or federal procurement regulations, whichever are applicable, were followed or a legally acceptable explanation as to why applicable state or federal procurement regulations were not followed, including but not limited to copies of RFPs, summaries of responses to RFPs, price quotes and bid tabulations.

Kriger offered some additional advice. He’s been involved with storm management and audits on some level since 1990.

He said the main thing that gets municipalities in trouble with audits is that they don’t follow their own local and state codes and bid processes.

“You don’t just get carte blanche because you had a disaster,” Kriger said. “All they have to do is follow the rules.”

Every audit is done identically, according to Kriger. They’re done in accordance to The Stafford Act and an audit is required.

“For some reason some municipalities think it won’t happen,” he said.

“At the end of the process, it’s like dealing with an IRS auditor — the federal government is not going to lose any money. Like the IRS, if you can’t find a receipt, they’re going to disallow the expense.”

A city or town has to have internal controls in place, show that it made a good faith effort to competitively bid, got approval before it awarded contracts and tracked every expense. Kriger said FEMA holds an applicant briefing meeting that is typically three to five hours long where it lays out expectations, passes out notice of intent and determines who is going to be the fiduciary.

He noted that FEMA usually allows for time and material quotes for 72 hours, giving city officials time to competitively bid. “Whatever your municipality allows you to do for emergency repairs over a weekend, you must do the same thing during a disaster.”

Kriger said in all the training classes he does, he tells attendees two things: “Only document the funds you want reimbursed — if you don’t want to follow the rules, don’t expect to be reimbursed.”

And as McHugh said, “Whenever the possibility (of a major storm) exists, (you) better start getting ready, get the gears moving in the right direction. Any time you’re involved in emergency management, you’re going to be audited.”