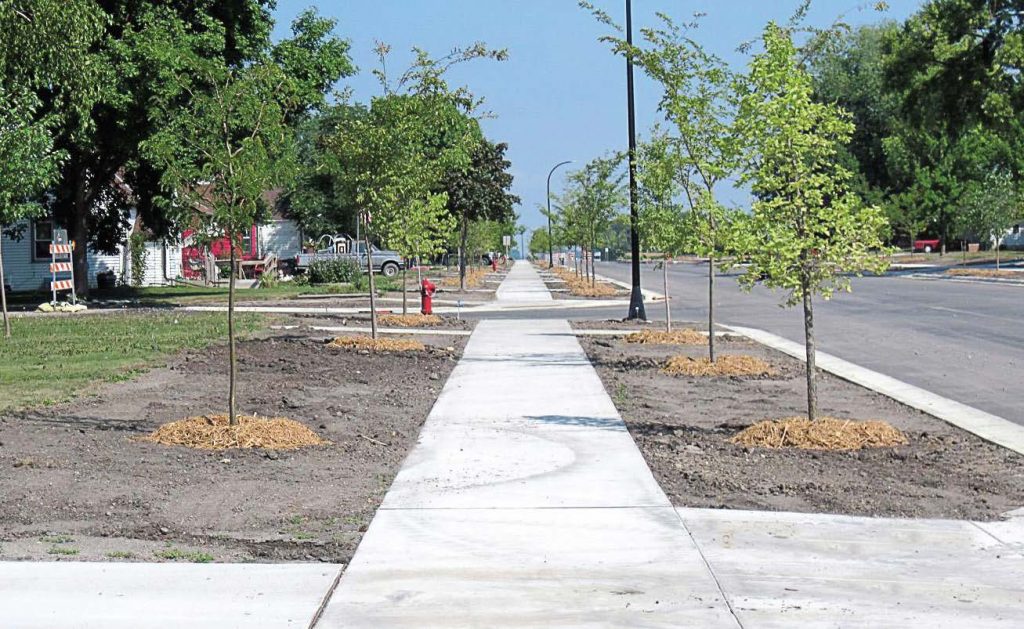 Sidewalks across the country are expanding to improve pedestrian safety while roadways shrink. These smaller roads improve drivers’ safety, too, by encouraging them to pay more attention. (Photo provided)

According to the National Association of City Transportation Officials, surface streets comprise more than 80 percent of all public spaces in cities. Street placement has the potential to foster business activity, encourage car travel alongside bikers and pedestrians and can greatly influence the connection between residents and their communities.

However, each year nearly 40,000 people are killed in traffic crashes in the United States, and that number continues to rise annually. This staggering statistic has led cities across the nation to examine ways to make streets safer for everyone traveling. One popular solution, according to NACTO Strategy Director Kate Fillin-Yeh, is to narrow street widths.

“The larger the lane, the less the driver has to work to remain safe,” she explained. “What cities have been realizing is shortening the width of lanes requires more awareness from drivers. They have to go slower in order to stay in their designated space, which reduces the harm of a crash in and of itself. On top of that, sidewalks and bike lanes have the ability to be wider for alternative methods of travel. The slower cars go and more street space you have, the better you’re able to ensure safe and spacious crosswalks for pedestrians in urban settings.”

Minnesota Department of Safety State Traffic Safety Engineer Brad Estochen has seen the positive impact of narrower streets  firsthand and says there is a misconception by the general public that bigger is always better. 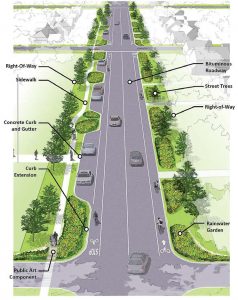 “In general, when accidents happen people want to make things bigger with the mindset that people won’t hit each other if they have more space to maneuver around situations,” he said. “However, that additional room often promotes bad habits like distracted driving and speeding by allowing more space on the road to overcorrect. If you command a driver’s attention with a narrow lane, they have to pay attention in order to avoid making poor choices. If you’re in bumper-to-bumper traffic, you’re less likely to be on your cellphone because you need to focus more.”

Estochen said Minnesota has explored narrowing street widths and the results have been positive.

“We’re narrowing up the lanes of traffic and that provides an opportunity to do something more counterintuitive, but the outcome is fewer crashes and reduced speeds,” he said. “Even if a crash does occur, injuries are minimal as opposed to life threatening.”

While narrower streets sound like a positive solution all around, not everyone is convinced that this is the safest approach. One of the public worries of narrower lanes is how EMT vehicles will maneuver the streets.

A traffic safety engineer by day, Estochen serves as a firefighter and EMT in his spare time. Having firsthand experience with both sides of the equation, he’s able to offer unique insight.

“One of the biggest threats to people when responding to emergency incidents, be it police, fire, EMS or roadway workers is they need adequate space to do their job,” Estochen said. “If there’s a crash, your work is defined by where that happens, and it could vary from the shoulder to the ditch or the middle of the road. When things get narrower, that work space becomes more constrained.”

Estochen said there are a number of measures EMTs are trained to take to accommodate for narrower roads, including securing a safe workspace by positioning vehicles a certain way to create a barrier, setting up flagging operations and guiding traffic.

“We do everything we can to make sure our workspace is secure and gives us enough room to do our jobs, but some of that burden lies on the general public as well,” Estochen said. “Be aware and alert while driving — don’t put yourself in a place where you’ll be in the way.”

In terms of planning, Fillen-Yeh said NACTO works with cities to provide technical advice and guidance, but most cities have a great working relationship with emergency technicians and take their needs into account when designing streets.

“Cities are always communicating internally,” she said. “EMTs and fire departments are involved in the planning process, and often there is some sort of community education that occurs when major changes are made. That conversation is definitely happening; nobody is setting out to design a road that wouldn’t work for everyone who needs it.”

A number of solutions, including smaller emergency vehicles, are being explored by emergency responders across the nation, but the bottom line, according to Estochen, is that drivers need to be aware and courteous.

“Look at your surroundings. When you see an emergency vehicle approaching, it’s probably on route to help someone who is having one of the worst days of their life,” he said. “Give them the opportunity to do their job efficiently and make somebody’s worst day a little better by giving them the care they need. It’s a few second delay in your trip, but those few seconds could save a life.”

These diagrams show the difference in turning radiuses between cars and semi-trailer trucks and how they can be impacted by streetscape changes. (Photos provided)