As cities grow, technology expands and demands for quality of life from residents shift, it has proven difficult for cities to keep up with ever-changing standards of what makes a “good” place to live. To make matters more difficult on city officials, what might work in one location, like lots of green space for community fellowship, might not in another.

That’s where benchmarking enters the equation. City benchmarking is the practice of surveying key innovations, service improvements and trends that contribute to the positive standard of living in the area. The ultimate goal is to improve services for residents and decrease costs for local governments. One of the largest factors of city benchmarking is noting what other cities across the country are doing in order to create some sort of standard for what works well and what needs improvement.

Companies and consulting firms across the nation have taken note that cities are in need of standards by which to compare one another and have in the last decade begun observing, surveying and collecting data to back up their claims.

One such company is KPMG, a popular auditing company that often leads benchmarking studies in large cities. According to Stephen Beatty, KPMG International’s global head of cities, this practice is crucial for community leaders to make educated, important decisions that will impact their communities forever.

“Very few cities have the data or the insights they require to make smart, valuebased long-term decisions. And that means that city managers are often left making major decisions — often with significant intergenerational impacts — based on little more than experience, outdated models and ‘gut feel’,” Beatty said in KPMG’s 2017 benchmarking guide.

Companies like KPMG lead cities through the benchmarking process, from initial planning to deployment of surveys and synthesizing of results.

Anne Westra, Sioux City, Iowa’s, communications and public engagement specialist, said the city is in the strategic planning portion of its updates, but the use of an outside firm to get the ball rolling was immensely helpful.

“It was helpful for us to have a facilitator at our first few sessions — someone who was an outside resource who came in as a new set of ears, to keep things moving and on track,” she said. “We were able to brainstorm big ideas and then collectively decide what our priorities were. I would recommend cities looking to start this process look into getting somebody in to help them out and keep them up to date on current trends.” 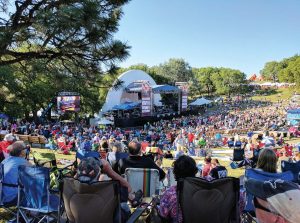 Parks and recreation factors into benchmarking efforts as cities aim to provide ample entertainment opportunities for residents, both current and new. Pictured is Sioux City’s Saturday in the Park Music Festival. (Photo provided) 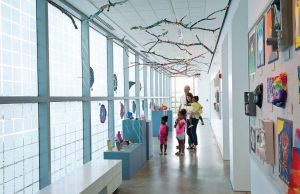 However, facilitated sessions aren’t the only way benchmarking can happen.

Housed at Michigan State University, the Michigan Local Government Benchmarking Consortium brings city leaders from across the state together on an annual basis to learn about new and innovative ways to satisfy residents while remaining fiscally responsible. Similar organizations exist across the country.

“The Benchmarking Consortium gives us the facts we need to implement a transformation of processes that is needed to serve our constituents better,” said Michael Norman, county administrator and controller of Branch County, Mich.

Westra said Sioux City’s mayor is involved in the Iowa League of Cities — another state-level organization that compares benchmarking data from across the state and identifies new ideas and innovations.

“These meetings happen on a quarterly basis, which gives community leaders across the state an opportunity to share best practices, talk out challenges they’re facing and come together to pool resources to handle a variety of situations,” Westra said.

In addition to gathering leaders, benchmarking can take a variety of forms: from observation of local events to surveys distributed to residents. Often, the creation of strategic plans is the outcome of benchmarking efforts.

“Sioux City is currently in the process of updating our comprehensive plan, a blueprint for the future, with the assistance of an outside organization,” Westra said. “We’ve held visioning workshops with the community and have encouraged participation in an online survey for resident engagement. The plan is a community vision that will guide growth and development of the city for the next 20 years.”

Factors that contribute to quality of life — including roadways, enterprise development, transit, recreational facilities and spaces, waste management, emergency services and water quality — are taken into consideration during benchmarking practices. Westra said all of these factors have been acknowledged in Sioux City’s efforts.

“The creation of the strategic plan will help guide city leaders with making decisions related to land use and development; housing and residential, commercial and industrial areas; transportation and infrastructure; parks and recreation; open space and environmental features; and community facilities and services,” she said.