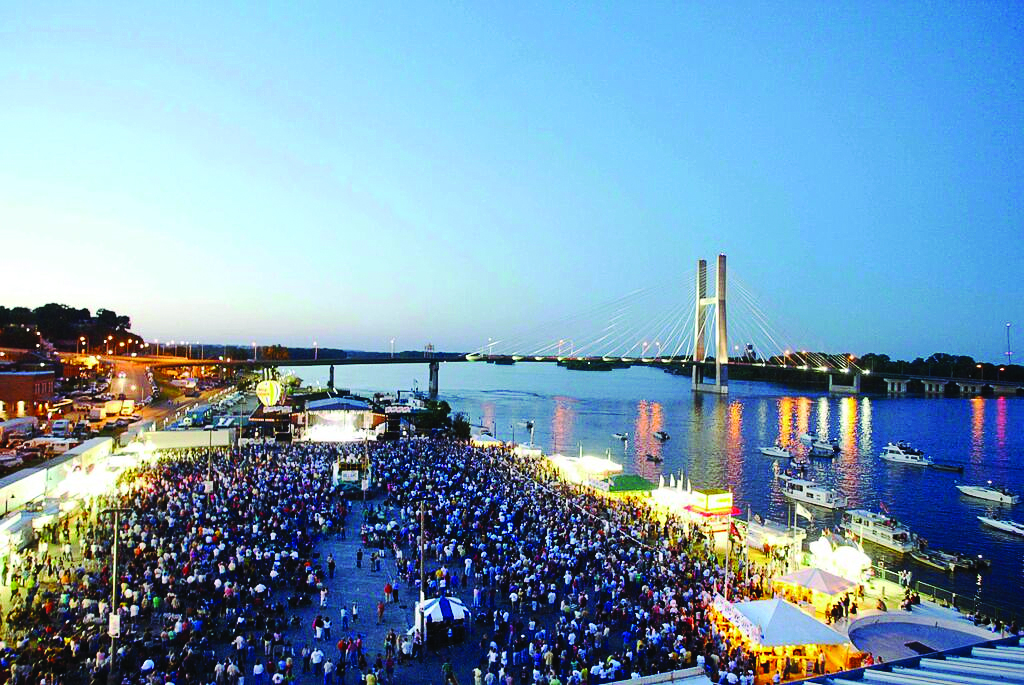 There is an abundance of headlining talent performing at many venues. While this can draw a healthy attendance, it can also come with a downside: music festivals sometimes become critical points for sexual assault and drug overdoses. This has resulted in a drop in ticket sales with big name events like Bonnaroo Music & Arts Festival and Sasquatch. And some top names have been in trouble with the law, which discourages some cities from booking them.

However, the reason for the onslaught of music festivals — both old and new — is that it is a viable path to city revitalization and tourism. Plus, these festivals could be a future move for smaller towns as a means of revitalizing their economics.

Burlington Steamboat Days in Burlington, Iowa, is in its 56th year of celebrating its popular music festival, according to Chelsea Lerud, executive director of the Convention & Visitors Bureau/Greater Burlington Partnership. 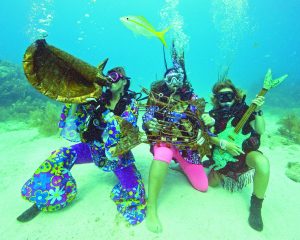 A yellowtail snapper swims by participants pretending to play a local artist’s musical instrument sculptures at the Lower Keys Underwater Music Festival Saturday, July 8, 2017, in the Florida Keys National Marine Sanctuary off Big Pine Key, Fla. The event at Looe Key Reef attracted about 400 divers and snorkelers who got wet to listen to a Keys radio station’s special four-hour broadcast with music and coral reef conservation announcements piped beneath the sea. From left are Kama Cannon, Marsella Munoz and Madeline Schoepf. FOR EDITORIAL USE ONLY (Bob Care/Florida Keys News Bureau)/HO

“The Burlington community benefits from $1.76 million dollars in visitor expenditures as a result of Burlington Steamboat Days hosting their event,” said Lerud. “This amount comes from a 2013 survey collected from event attendees, and these dollars include ticket sales, hotel stays, shopping, restaurants/bars, transportation, etc.”

Billed as four nights— June 14-17, 2018 — of live music under the stars, the entire event is held on the banks of the Mississippi River with three stages, a shuttle bus and a lot of security. This year’s headliners are the Charlie Daniels Band and Jefferson Starship, along with several lesser-known bands. The first-ever BSD Praise Fest will also be hosted during the event.

Mike Johnstone, the Des Moines County sheriff, has been generously sharing the city’s incredible preparations prior to, during the event and post-festival.

“The main concern today is the potential for some sort of terrorist event,” Johnstone said, adding that they have done what they could in the past and will continue to do so in the future of preparing for an event.

“We work closely with our local emergency management and we had emergency drills, tabletop exercises, which we coordinate with our local law enforcement, including the Burlington police, the sheriff and the Iowa State Patrol. We also have our own security comprised of volunteers that assist us during the event.

The threat level for different events could change from day to day based on the entertainer that might be playing that night, so overall it is a very dynamic situation.

“We do have a bag check and confiscate any weapons as they are not allowed on the grounds,” said Johnstone. “And again, we have local law enforcement that is paid to provide security, as well as our volunteers. We constantly reassess during the event based on the entertainer, the potential crowd size and the weather.

“Since we live in the Midwest, we have a very great potential for strong storms, thunderstorms and lightning storms that could interrupt the event. Therefore, we look very closely for weather events and also watch the river very closely, which can flood and has in the past interrupted on a couple different occasions. We do have a new permanent flood wall for protection along the riverfront that is almost finished.”

Final stages of the flood wall are a few years out, according to an article in the April 6, 2018, The Hawk Eye, Burlington’s newspaper. Even here the festival planners have a Plan B for missing spots in the wall. If a flood seems imminent, temporary slats will be affixed to these spots. The city already has these slats, stored on trailer beds at Southeast Iowa Regional Airport ready to go. The final wall is predicted to be capable of holding back a 28-foot flood. 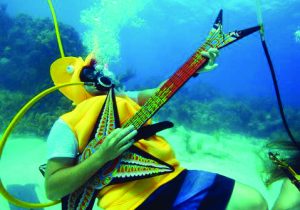 Despite the potential for floods, the Mississippi River adds a lot of flavor to the musical events, noted Johnstone.

“The one bit of advice that I could give any group that is planning to put on an event this size is to be sure you communicate with everyone in your community,” said Johnstone, “because they are a big asset to you.”

He added, “Communication is huge, planning is huge and, of course, be ready the best you can for any of these variables that might pop up. Basically, that means you’re going to be planning year-round for the event; it’s not something that you can do in two to three weeks; and again, it’s about communication and planning preparation. Be ready for things that come out of the blue and have a good working relationship with your City partners, your county partners, your local media and your law enforcement, which is all very important when you’re putting together an event of this size.”

Burlington Memorial Auditorium is on the grounds and is a very large building, Johnstone said. There is also another building on hand for shelter when the weather is dangerous.

“However, we try to work very closely with the National Weather Service, and we make every attempt to keep our crowd apprised of any upcoming weather threats and give them a time frame as to when the severe weather might arrive. Lightning and wind that pop up quickly are cause for concern and we’ll move the people into the auditorium, or many of them will go home or back to their cars.”

Carry-on alcohol of any kind is prohibited per the state law for liquor license and establishment.

“Burlington has a liquor license, which covers our facility and it’s extremely important that we keep that liquor license healthy, which means we cannot over-serve anyone,” said Johnstone. “All of our servers go through a state-mandated instruction course so they are trained to identify intoxicated people and turn down someone who has been drinking excessively. The servers use eye-pack training and are required to successfully pass that test before they are able to serve at Steamboat Days, and that helps a lot.”

The event has not had any large issues with crowd control at all, and even the big assemblies of 10,000-plus people have been cooperative.

“The Iowa code dictates that all bars and the drinking have to be all picked up and everything closed down by 2 a.m.,” said Johnstone. “During the week, we’re usually closed down by 12:30 a.m. and on weekends we wrap everything up about 1:30 a.m.”

Asheville, N.C., holds music festivals in the summer, but city leaders moved these events to Community and Economic Development Department in 2013, according to Roderick Simmons, director of parks and recreation.

“Many viewed festivals as an economic drive and believed that there were numerous organizations in the community producing festivals; therefore, the city government should not be competing with nonprofits’ producing events,” said Simmons.

“The thought was that Bele-Chere Music & Arts Street Festival, now defunct, and the Film Festival could be operated by a private group, which would save the city money. Economic Development issued RFP for Festivals.” 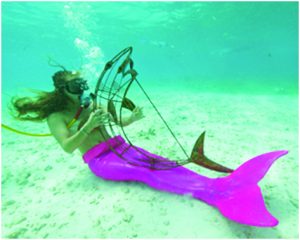 Jon Fillman, outdoor event manager with the Community and Economic Development Department, noted of the shift, “This is a good example of a highly successful and longstanding event and how cities can evolve their approach to festivals.”

Fillman said, “Today, the city’s role in festivals is focused on maximizing the positive impacts and mitigating the less desirable through policy, partnerships, planning and permitting. The city maintains agreements on a three-year cycle with several nonprofit organizations, which produce a variety of outdoor special events and festivals. In return, city departments provide in-kind support and fee waivers at a maximum annual value set by city council.”

Further in the South, the 35th Underwater Music Festival will take place in the Florida Keys National Marine Sanctuary off Big Pine Key, Fla., which is the only one of its kind in the world. Last year 400 divers and snorkelers submerged themselves to hear four hours of piped-in music of ocean-related songs by US1 Radio, as well as coral reef announcements. Some of the snorkelers even play sculpted music instruments.

This year’s Underwater Music Festival will take place from 10 a.m. to 2 p.m. Saturday July 7, 2018, at Looe Key Reef. The monies from this unique event will go toward reef preservation. According to Sue Miller, executive director of the Lower Keys Chamber of Commerce, their festival is so awesome there is no need for a police presence.

“Those who are going on the Captain Hook’s Looe Key Adventure Strike Zone boats park in their lot; other divers/snorkelers park at Looe Key Reef Resort to board their boat,” said Miller, “and many of the 400 divers last year come in their own boats from their own docks.”

The underwater music festival itself, which draws photographers and videographers globally, truly does not make any on this venture.

For more information, contact the Lower Keys Chamber of Commerce at 305-872-2411 or email executivedirector@lowerkeyschamber.com.