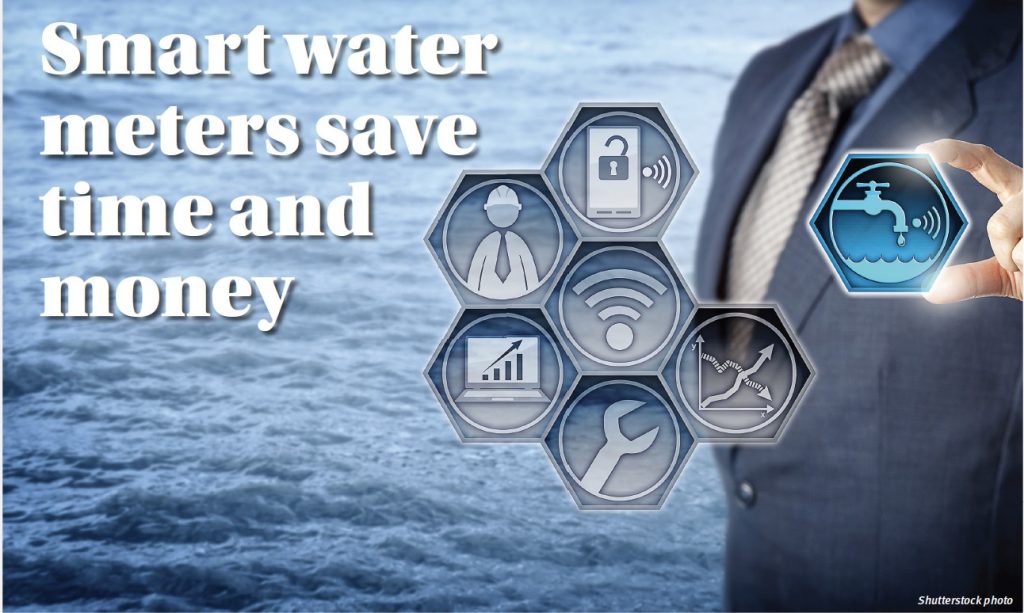 If you answered Samuel Taylor Coleridge, in his poem “The Rime of the Ancient Mariner,” you get a gold star — and you get two gold stars if you are an employee of a public works department.

Because water is essential to life, we’re all greatly indebted to those who make sure it is clean, fit to drink and abundant. Additionally, we are grateful to those folks who find ways not only to improve our water supply, but also correctly measure it so that there is enough for all.

Robert Conner, director of water utilities in Lakeland, Fla., volunteered some information about new high-tech water meters in his city.

“Lakeland Water Utilities and Lakeland Electric are both departments of the city of Lakeland,” said Conner, “and while separately funded, managed and operated, we do share some administrative functions like billing. We also share a lot of IT infrastructure with the rest of the city. Several years ago, Lakeland Electric implemented Smart Grid for reading and billing. This also gave them some monitoring and control of their distribution system.”

According to Conner, for economic and tactical — Department of Energy deadlines — reasons, Lakeland Water Utilities did not implement simultaneously because the city recognized that continuing manual reading in parallel with centralized automated reading is an ineffectual way to generate a shared bill.

“Several hundred meters of various configurations were deployed across the service territory. These have been monitored for several years. We have solved most of the issues found and have the remainder being worked on. Mass meter deployment started in December 2017, with a five-to-six-year plan. This work is being done by city forces. Had Water Utilities been operating without the association with Lakeland Electric, we probably would have made some different choices. However, our relatively rare partnership has made this choice the best for us.” 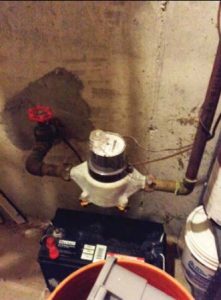 Scheduling a time to install a smart water meter in the basement of a home can prove challenging, especially with vacant accounts or “snow birds.” (Photo provided by PMI) 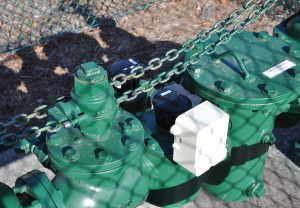 Pictured is a 4-inch Neptune FM meter, which is connected to a Sensus MXU. The Sensus MXU will retrieve the readings from the Neptune water meter and transmit them to a tower where the data will be passed to a database.” (Photo provided by Lakeland Water Utilities)

Professional Meters Inc., a 1999-founded company in the automated meter-reading industry, is based out of Morris, Ill., and has offices in Florida, Missouri and California. PMI has successfully installed more than 1 million Automatic Meter Reading and Advanced Metering Infrastructure-equipped meters.

Don Shuler, PMI sales director, said the company is a product-neutral utility meter installation contractor and doesn’t actually represent a product or a specific meter brand but has installed just about every brand of intelligent metering system in the U.S. market.

When it comes to installation, Shuler said the greatest challenge for indoor meters is scheduling an appointment with customers to get in the house and down to the basement in order to change the meter.

“In most cases, we can get 85 percent to 90 percent of the accounts scheduled. It’s the remaining vacant accounts and ‘snow birds’ we have trouble accessing,” Shuler said. “In some cases the water lines are deteriorated, or valves don’t function properly. In those cases, plumbing repairs are required and additional costs are incurred.”

In Lakeland, Raymond Hoppenworth, CPM, smart grid systems manager with Lakeland Water, said the biggest challenge has not been accessing the basement water meters “because in Florida there are very, very few basements.”

Hoppenworth added, “Our biggest challenge is that the technology is relatively new, which means the software is not as mature as it could be. The bells and whistles are not as numerous as they could be and the integration to other software applications is also more challenging.

“We have about 60,000 meters in our system, and about 3,000 of those have been converted to smart water meters so we have a ways to go. It will be approximately a five-year process to convert everything to smart water meters. We’re using a mixture of both mechanical and solid state, with an emphasis on mechanical.”

Lakeland also has an opt-out program for its residents, noted Hoppenworth.

“If a customer has concerns about smart meters, electric or water, and does not want one installed at his/her location, we allow that customer to opt out of our smart meter program; however, their meter has to be read monthly through a manual meter reading process, and there is a fee that is associated with opting out that covers the cost of that meter-reading process.”

Frances Fyten, an associate of Reputation Partners Communications in Wisconsin, shared the success of Merced, Calif.’s, installation of Badger Meter’s smart water meters when the notorious drought hit the San Joaquin Valley in northern California in 2014 and 2015.

“With the city’s expanding population (81,743), the water system division also needed to have the flexibility of addressing a growing system,” said Fyten, who went on to say that the city devised a multistep approach, which included:

• Installing additional meters to address an unmetered portion of its system; and
• Implementing a more efficient meter reading solution — it originally took two workers more than a week to read all of the meters within the system.

“It was able to identify and address leaks within the system in 24 hours compared to every 30 days, per its original billing cycle,” concluded Fyten.

Rolling Meadows, Ill., is another town that is proud of its Smart Point meter program. Its website offers the advantages of the newer meter system, which included:

• Customers’ water meter will be read monthly and the bill will be for actual water usage each month;
• It meets regulatory requirements from state and federal agencies;
• Minimizes water losses and increases water meter flow accuracy;
• Makes water leaks easier and sooner to detect; and
• Allows the city to notify residents and businesses of plumbing issues in a timelier manner for quicker resolutions.

When asked what advice he would give cities that are contemplating the switch to high-tech water meters, Hoppenworth did not hesitate to answer.

Another bit of advice is that project planning for both now and 15 to 20 years is very important, according to Hoppenworth, because a smart water meter’s life expectancy is 15 to 20 years.

“If the new smart meters are installed in a short period of time, they will have to be replaced in the same amount of time as they reach their end of life,” said Hoppenworth. “The cost may surprise some utilities if they do not consider the next generation of smart water meters.

“This is one of the reasons we are installing them with internal resources over a five-year time frame.”