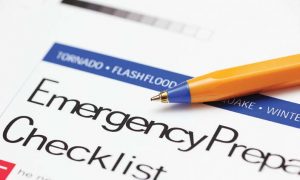 Public safety has been pushed to the forefront of the public consciousness recently with shootings and natural disasters seemingly becoming constants. Cities and their various departments across the country are undoubtedly entering into self-reflection and inevitably asking themselves one question: What if it happens here?

From there, the question deluges into many: Do we have a plan for scenario X, Y and Z? When has that plan been updated? Is the plan detailed enough? Does it clearly list a chain of command? Are priorities listed, such as which departments should be prioritized when it comes to fuel? Is there a system in place to document all expenses during the disaster so after it there isn’t a scuffle to pull everything together for the Federal Emergency Management Agency? And so on.

Even if all these questions can be easily answered, in the words of Scottish poet Robert Burns, “The best-laid schemes o’ mice an’ men, Gang aft agley” — or go awry, if you’re unfamiliar with Scottish dialects.

Some northern Indiana cities local to The Municipal’s office got a taste of this in February when a large of amount of snow melted and was followed by a deluge of rain. Since the ground was still frozen, the end result was massive flooding, particularly around rivers. Several states of emergencies were declared by local cities, and in the case of South Bend, Ind., raw sewage had to be pumped into the Saint Joseph River after its wastewater treatment plant was shut down due to flooding.

Flooding in February is seldom expected, but municipalities, other local agencies and first responders really stepped up, and — as I write this at the beginning of March — they are working with FEMA to assess damage and get paperwork in order so assistance can be provided.

Our guest columnist this month, Tammy Rimes, a procurement consultant and executive director of the National Cooperative Procurement Partners, highly recommends keeping procurement departments in the loop during crises — they can be your best friends. Not only can the fine folks in procurement get needed supplies, but they can also manage donations and help streamline the documentation process needed for FEMA reimbursements.

In regards to gun violence, writer Catey Traylor has highlighted North Carolina’s Goldsboro Police Department and its efforts to reduce gun violence in its community with the installation of real-time gunshot detection sensors. Since the sensors went into place, the department has seen an increase in positive identifications of suspects.

Other public safety related topics include cost-saving methods for police fleets; how technology is changing training in the fire service; how fire departments are adjusting to the increase of electric vehicles on the roadways; what police officers can do to develop positive stress release techniques; and we will be sharing out-there calls police departments have received — predominately paranormal calls.