Virtual reality 3-D simulators, augmented reality simulators and other digitally enhanced training tools are being developed, and new technology is making these tools more accessible to fire departments at all levels. These new training tools have several benefits over traditional controlled-burn trainings, which are getting more difficult to carry out.

Oculus Rift, a virtual reality system with HMD that Facebook founder Mark Zuckerberg acquired last year, is being credited with making the price range more practical for most consumers. With prices ranging from $199 to $399, Oculus Rift and other similar systems are likely to be more affordable than in the past.

The promotional information for Ludus states, “The recreation of realistic environments in 3-D (makes) it possible for individuals and incident command to experiment with risky situations in a completely safe way.”

The trainee is immersed in a 360-degree experience with realistic effects and scenarios. The simulator has true-to-life behavior of smoke and fire. The Ludus system includes a weather system to change to different environmental conditions and challenges. Monitoring is available in real time, and monitors can interact to create new conflicts. Scenarios available with the Ludus system include a port area, airport, forest and customizable home buildings.

The ADMS by ETC Simulation is an augmented reality system that offers effective training for “tactical firefighting and ventilation.” It offers a head-up display that has sensor technology that replicates the user’s actions in a simulated environment, such as head turning or kneeling.

The city of Montgomery, Ala.’s, fire and rescue department has two different simulators, both purchased with grants.

Lt. Jason Cupps said the first is a driving simulator built like the cab of a fire truck. The system simulates changes in weather, road conditions, tire blow-outs, etc.

“It gives them a real apparatus experience,” he said.

The simulator has basic driving courses in addition to programs that will test different responses to changing conditions. It has a rural and an urban setting. Although not wearing headsets, Cupps said the trainee is surrounded by six 40-inch monitors that go from extreme left to extreme right to cover peripheral vision. He added if it’s not 360 degrees, it’s pretty close.

Cupps said the simulator is so realistic that it mimics the dinging sound if the seatbelt is not clicked and seats can be adjusted. “It even has a cup holder!”

He noted, “We intentionally have things jump out in front of them — it’s better for them to experience different things without risking the life of the firefighter or damage to property.” The department received the driving simulator last year, and it has been using it pretty heavily. He said the department conducts a warmup session first to give trainees a chance to get used to the feel of the simulator and the controls.

A couple of months later the department received the ADMS incident command simulator. According to a press release from ETC Simulation, the simulator was delivered in the fall and purchased with the help of the Department of Homeland Security’s Assistance to Firefighters Grant.

Cupps said the department has used it a few times, but it is still setting the system up and looking to implement it to train district chiefs coming out of the fire academy to help them make better decisions. The ADMS is an augmented reality system and different scenarios can be programmed into it.

As for potential scenarios, Cupps gave an example of a standard two-story structure fire. The candidate would see the scenario happening and have a 360-degree view around the building. They would then make an assessment to send in an engine company. The proctor would make that happen. Later, the candidate may decide to send in search and rescue, and he’d see that happening.

“The hope is that with the correct decisions the fire is out quickly, or if the decisions worsened the conditions, they would see the fire start to spread and grow,” he explained.

While Montgomery Fire and Rescue Department is still customizing programs to suit its needs, it did receive two-day training from ETC Simulation trainers.

Cupps agreed that conducting controlled burns is becoming more difficult for fire departments. He said the availability of acquiring houses or buildings to burn is scarce, and stricter guidelines and regulations have been enacted.

“Obviously our top priority is safety,” he said, adding that the department is fortunate to have nearby Maxwell Air Force Base, which has a practice burn building.

“That’s where we take recruits from the fire academy. It’s a three-story building, and we can set up fires, practice laddering and rescue scenarios,” he said.

He believes having virtual reality systems offers departments “an extra tool in the toolbox. It shows them what to look out for on the streets and gives them a heads-up before putting them behind the wheel of a half-million dollar piece of equipment.”

Cupps said he would love to have the VR headsets and thinks after the department gets comfortable with the equipment it already has the headsets might be a possibility for the future, especially as prices decrease.

“We’re fortunate to have great support from our mayor and the city, and with the budget we have, our chief believes in having the best equipment to do our best job,” he said.

Cupps said he would recommend virtual and augmented reality systems but cautions when buying to make sure it’s not going to become outdated too soon and that the vendor offers upgrades and support.

He said as fire services keep moving forward, and especially as young recruits join departments, he believes that these systems will become more relevant and prevalent. 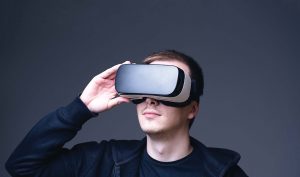 Affordable head-mounted devices are opening up new high-tech training methods through virtual reality for those in the fire service. (Shutterstock.com) 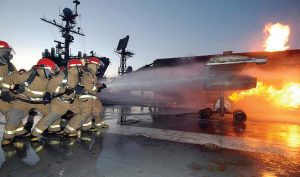 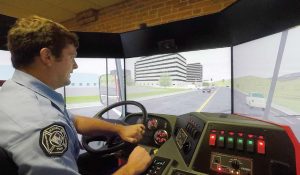 The driving simulator offers the realistic sights and sounds of a fire apparatus while challenging those in the simulator with unexpected obstacles and environmental changes. (Photos provided) 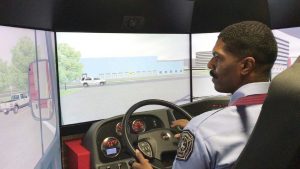 The Montgomery, Ala., Fire and Rescue Department added this driving simulator to train its recruits and keep all members proficient with skills and challenges they might run across when driving an apparatus.

Gary Joice, president and founder of Cancode Safety Systems Inc., which is based out of Ontario, Canada, has a passion for assisting firefighters and first responders to better equip them to do their jobs safely. He has an extensive background in this area serving 18 years as a firefighter — 11 years as a volunteer and seven as a full-time officer — in Canada and then 30 years as a private contractor in fire/ rescue training worldwide. He has worked with numerous U.S. fire departments in large and small municipalities, as well as commercial industries and the federal government — U.S. Air Force, Navy, NASA and Federal Emergency Management Agency.

He founded his company in the mid-1980s, developing the “world’s first mobile propane fired trailer” unit as a result of changing fire codes in the Province of Ontario.

“I realized that hands-on training was required and that, in turn, to be realistic and effective the training classroom structure would need working sprinkler systems, working hose cabinets and hands-on extinguisher training of different types. To do so effectively, it required having ‘real flames’ generation,” he said.

After trial and error, remote-controlled vapor propane was the key, and the company included an exhaust system to remove the fumes from the enclosed training area. Cancode Safety Systems used a stripped out 45-foot-long, 10-foot-wide mobile home and installed a 10-by-12 burn room, classrooms, etc. The mobile fire training unit traveled across Canada, and when word spread to the U.S., a “next generation,” more compact unit was developed.

Joice is now developing a new mobile unit that will provide the hands-on training with digital simulation interface and emotional sensing. He’s nicknamed the unit STMM, or Smarter Th an Me Mobile. The STMM is being specially designed “with consideration for today’s training needs.”

Joice said the unit is designed with environmental and personal safety needs in mind. It has removed the trainee’s exposure to open flame while greatly reducing injury by falls and claustrophobic reaction.

“Even though it provides real stress challenges, the chance of being injured during training is greatly reduced,” he said.

It also has the added benefit of being able to exactly repeat and fully record each trainee’s actions and can be fine tuned as needed and safely altered during the training.

The STMM unit will have “emotional sensing to monitor and record an individual’s status (that) could not only be lifesaving at a scene, it could be extremely valuable in determining a candidate’s weak points needing retraining or assist during hands-on training or disqualification for certain roles,” Joice said.

Live flames have been removed and state-of-the-art movable digital flames are incorporated. The realistic heat is delivered from and around the digital flame sectors, and nontoxic smoke is also delivered when applicable. Joice has personally invested $300,000, has received another $300,000 in grants from Ontario and is seeking another $300,000 in matching funds with profit shares for investors.

“In my opinion from experience, actually having the heat/air movement hit all (of ) your body as the walls vibrate and the entry floor drops plus high intensity flame flares right in front and around you is vital to firmly reinforcing the what to do and not to do,” Joice said.

He said with the reality of today’s economy rather than having the high expense of upgrading and maintaining a fixed set facility and incorporating virtual reality, the mobile unit will be available to rent by the day or week, thus making it accessible for even volunteer fire departments.

“The bottom line is VR capabilities are an up-and-coming reality and will be beneficial to the capability and safety of first responders,” Joice said, while cautioning that a blend of training is most appropriate.

As fire departments plan equipment budgets, seeking out virtual reality and other digitally enhanced training vendors might be a real possibility for that “extra tool” in training firefighters.

Differences Between Virtual and Augmented Reality

So do you go with virtual reality or augmented reality? How about a head-mounted device or a head-up display? It depends on how you want to use it.

When comparing HMD and HUD, both are very similar, but the HUD has three primary components: a video generator computer, projector and combiner. The video generator stores information to be displayed and sends it to the projector unit, which projects to the glass screen — similar to the HMD. With HUD though, the combiner is responsible for combining the natural environment of the background display with the computer generated display, allowing the user to view each at the same time. So statistics could be displayed on the screen at the same time as the scenario, for example.