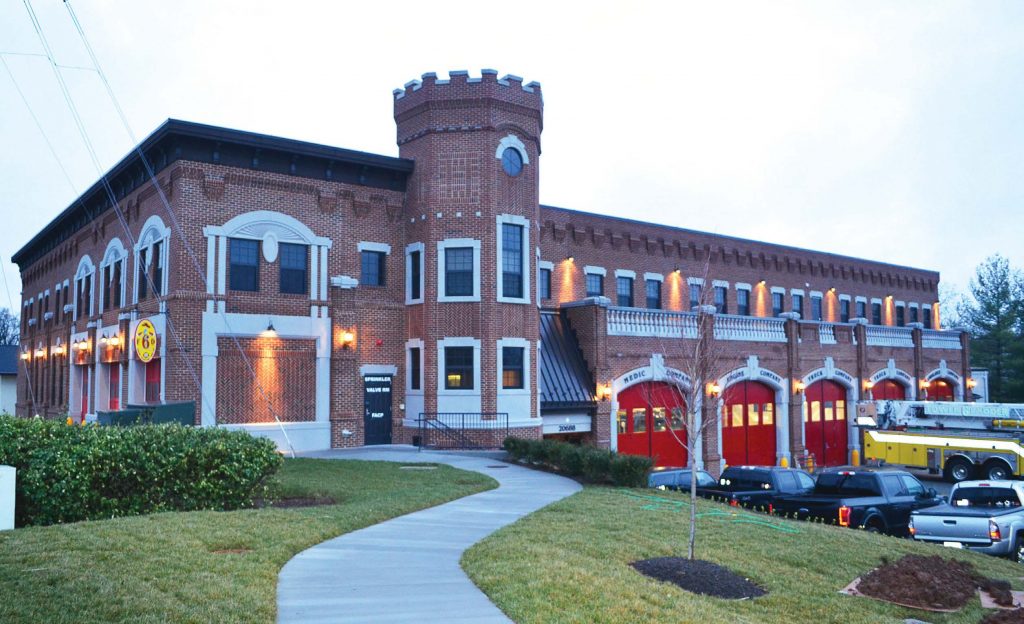 “Daylight is a human right,” said Seth Warren Rose, founding director of Eneref Institute. Our daytime alertness pattern is mediated by light exposure to our eyes. Melatonin is the hormone that induces sleep. Inhibited by light, and triggered by darkness, melatonin levels peak at night. In fact, all the cells in our body go through an activity rate cycle.

Therefore, not only does natural interior daylight save energy, it is necessary for our health. Architect Peter Edivan specified daylight to transform a 21st century firehouse into a showcase of sustainability with a traditional 19th century building design.

Sun tunnels, long tubular skylights, brought daylight from the rooftop of the Ashburn, Va., firehouse into the building’s interior. Sun tunnels are designed to minimize light loss through the tube, resulting in brighter illumination into the interior space.

During daylight hours, the electric lights can be turned off in most areas of the second floor of the new firehouse, according to Mike Bromley, the contractor of Chamberlain Construction Corporation, which installed the skylights.

“Even at night, you can see the moonlight coming through them … like the lights are on,” explained Bromley.

Because sun tunnels can be adjusted during installation, the light output lens does not have to be placed directly underneath the rooftop lens. For example, if an HVAC system sits directly over the point where light is needed, the skylight tubes can be configured, or bent, to transfer the light into the room — even horizontally. Up to 20 feet long, sun tunnels are relatively easy to incorporate in a building without the need for major structural considerations or changes.

“Actually, in daylight mode, the light coming out is quite intense. They’re probably even a little bit brighter than the hallway lights alone,” said Stan Murphy, the fire station project manager.

Maximizing daylight in the firehouse

To realize the benefits of natural interior daylight, 27 sun tunnels were secured to curbs on the fire station’s EPDM flat roof of a synthetic rubber membrane. Contractor Bromley said he found no problems installing the sun tunnels according to the manufacturer’s directions.

“Everything seemed to work out fine,” said Bromley.

Using a highly reflective specular material, sun tunnels are specially designed to maximize the use of sunlight. When sunlight enters a rooftop lens, the light bounces back and forth down the tube. Multiple bounces can substantially reduce light output in a typical skylight with a diffuse surface. However, due to the specular nature of the reflective surface of sun tunnels, very little light loss occurs through the tube, even when the sun tunnels are angled.

Though sun tunnels do not offer a direct view of the sky, these skylights essentially squeeze every drop of light out of the system.

To achieve a completely glare-free room, sun tunnels use a prismatic pattern lens. The lens is optically designed to evenly distribute the sunlight exiting the skylight. This effectively creates the same level of visual comfort expected from a well-designed traditional electric lighting system.

Edivan specified 27 VELUX TCC-022 standard 22-inch diameter sun tunnels in rooms where there were no windows, including the corridor — which serves the perimeter rooms — and the center core area leading to the upstairs. He also specified skylights in the bedrooms, locker rooms, lounge area, break room, view room and bathrooms.

The skylights drove sunlight from the rooftop into the room’s 24-by- 24 acoustical ceiling tile grid. In the bathroom, round lenses were set flush into the drywall celling.

Because sun tunnels are so adaptable, Edivan was able to specify the same model for all areas of the firehouse, despite differences in roof slope and ceiling type. With the help of skylight kit accessories, Bromley adjusted the direction — or shape — of the skylights in the field. With two 30-degree angled elbows per kit, the sun tunnel kits allow the skylights to fit nearly any structure.

Bromley said the VELUX instructions for the angling elbow system were helpful and well thought out.

“The instructions were clear. I was perfectly happy with the way it ended up,” said Bromley.

Daylighting in the new firehouse facility 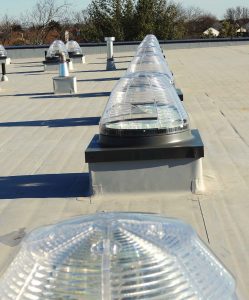 Sun tunnels are long and can bend around objects that would otherwise interfere with — or totally prohibit — the installation of traditional skylights. (Photo provided)

The old firehouse, which had been built in the 1940s, was grossly inadequate for the number of people and the equipment.

“It was not even close to code compliant,” explained Murphy. “People who were volunteers back in those days weren’t worried about electric code.”

The new firehouse was primarily designed to meet the needs of a modern fire department, but the firehouse committee also wanted the building to replicate the classic appearance of an early-1900s fire station.

“We wanted to capture the tradition of the fire service to get the camaraderie and to really encourage that — which we think helps in recruiting and gives us a sense of mission and purpose,” said Murphy.

A committee was involved throughout the design process, including the fire chief and assistant chiefs, giving the architect direction.

“We all just sat around the table and said, ‘What do we want out of this? How big is it going to be? What type of features do we want?’” said Murphy.

Edivan said his client liked the idea of skylights at first pass.

“I drew skylights on the drawings, made the presentation and said ‘OK, here’s the lighting plan.’ It didn’t take any convincing at all. They all said ‘that sounds like a great idea,’” explained Edivan.

“Once everyone saw the skylights in the corridor, I think honestly they had forgotten I put them in the project,” said Edivan. “And they were quite pleased to see how much illumination they brought into inner corridors for the building.”

The challenge for Edivan was to design the look of a traditional firehouse using modern, sustainable technologies while staying within budget. Edivan quickly decided on sun tunnels.

“I was thinking about how I wanted this space to function and in my mind, it just naturally cried out to have the sun tunnels,” said Edivan. Lieutenant Fox agreed.

“I’m looking at the long-term operation cost,” said Fox. “I basically don’t have to light those areas during the day.”

Edivan chose VELUX because “I know they’re a dependable product,” he explained. “The details and the support that Velux provided made me feel warm and confident.”

For aesthetic appeal, Edivan spaced the skylights 12 feet apart to create a repetitive, symmetrical pattern of ceiling tiles and skylights down the hallway.

“I didn’t do a calculation. It was a gut call,” he said. “But I didn’t just throw them on there for the sake of throwing them on there. It was a functionality of what they can bring to the project.”

Because perimeter rooms already had windows, skylights were not specified for those rooms. Edivan added blackout curtains to bunk room windows to help firefighters sleep during the daylight hours.

Located about 20 miles outside of Washington, D.C., the Ashburn firehouse serves a heavily populated geographical area. The fire company built the entirely new, 35,000-square-foot two-story building next to its original 65-year-old, 13,000-square-foot station. Around 5,000 square feet of the original building was retrofitted to house a social hall.

The ground floor of the new fire station houses the trucks, offices, a kitchen, a dayroom, a gathering room and the watch room — the heartbeat of the fire station. The second floor includes the locker rooms, bedrooms, administrative services and training rooms, exercise rooms and lounge.

“A fire station should be treated — and I treated this one — like a frat house, because it takes a lot of abuse,” said Edivan. “The upper floor is used primarily at night, for rolling out of bed, going down the fire pole and then hitting the trucks.”

And, according to Murphy, the skylight system has already proven itself to perform under harsh conditions. “We had a big blizzard back in January — close to 36 inches of snow in one day — and we had no leaks.”

The design process for the new facility took six months, and construction required an additional 18 months to complete. The total cost for the project was $8 million. Most of the cost for building the new facility was financed with fundraising savings, along with some additional money from a volunteer small businesses alliance. About 20 percent came from Loudoun County.

According to Fox, once the building was completed, the occupants were not even aware of the sun tunnels. But what they did immediately notice, he said, was the quality of the interior light and overall atmosphere.

“Firefighters would hit the light switch and say, ‘Oh, the lights are already off,’ because of all the daylight coming through,” said Fox.

Beyond the improved lighting and cost savings, the sun tunnels have become a source of pride, Murphy noted.

“When I take people on tours in the station, it’s one of the things I point out,” said Murphy.

Edivan, meanwhile, summarized the success of the natural interior daylight this way: “The client is happy. So, all I can do is smile.”

Article provided by the Eneref Institute.