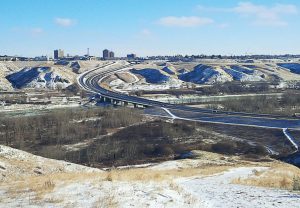 The city of Lethbridge, Alberta, Canada, has utilized variable advisory speed limit on its Whoop-Up Drive to hopefully reduce collisions, particularly during winter when driving conditions are less than ideal. (Photo provided) 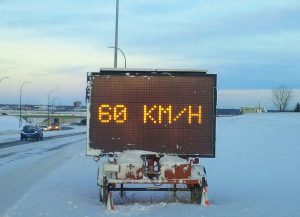 While VASL has been documented to reduce collisions by 45 percent and injury collisions by 20 percent, human nature can decrease its effectiveness as a driver might ignore the speed limit if they think roadway conditions are improved. (Photo provided) 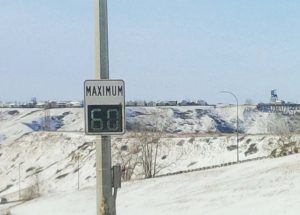 Other challenges with VASL signs include technical glitches and problems with visibility, particularly on sunny days. (Photo provided) 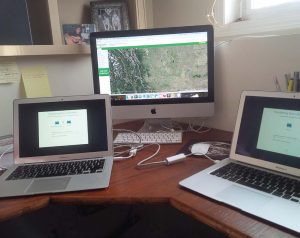 City of Lethbridge employees are able to adjust all message boards from the office by using management software. (Photo provided)

A variable advisory speed limit could be an effective tool in reducing the number of collisions and accidents on the road, according to two experts.

Lee Perkins, transportation operations manager with the city of Lethbridge, Alberta, Canada, said VASLs have worked in his community. In his research he found that VASLs have been used to improve traffic safety by restricting speeds during adverse conditions such as a winter storm resulting in poor driving surface conditions.

Case in point: Perkins and his team selected Whoop-Up Drive as a test site. It was a 3.5-kilometer — or 2.2-mile — roadway stretch of divided two or three lanes in each direction. Volume averages between 45,000 and 50,000 vehicles per day. He said it’s the only roadway within the city of Lethbridge with the current speed limit of 90 kilometers per hour, or 55 mph.

Why this location? Past incidents suggested it was problematic. According to data collected from 2008-2012, there were over 500 collisions and almost half of these incidents occurred during winter weather. Th ere were as many as 10 incidents in a day. Collisions resulted in 37 injuries in that same period.

The idea is that with lower speeds comes a potentially better outcome for drivers and passengers. “Documented evidence shows that a variable speed limit can result in a reduction of 45 percent in all collisions and a 20 percent reduction in injury collisions,” Perkins said.

Despite these statistics, he said that adopting a VASL is not a sure bet when it comes to compliance. When dealing with human nature and tendencies, there is no flawless system.

“During the main part of the storm, people obey the limit,” he said. “Th ey begin speeding up as soon as conditions improve.”

According to Perkins, there were some technical glitches that entered into the equation, too. Issues from speed display units and problems with visibility of the signs during sunny days were reported. Capital costs were $120,000, and annual maintenance costs amounted to $4,000. The bottom line, Perkins said, is that VASLs are one tool for traffic engineers and operations departments to lean on — as a means to an end.

“Unfortunately, during major winter events perfect driving conditions cannot always be attained; by reducing the speed limit, it provides a safer environment for the motoring public,” he said. 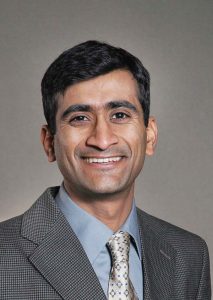 University of Missouri Associate Professor Praveen Edara had similar findings. Edara was the lead author on a paper titled “Evaluation of variable advisory speed limits in congested work zones” recently published in the “Journal of Transportation Safety and Security.” Edara set out to find out if a VASL system might lessen congestion and reduce rear-end and lane-changing accidents on Interstate 270, a major four-lane highway in St. Louis.

“Even without any incidents (of construction or accidents), there are several recurring congestion problems on the I-270 corridor,” Edara said in a May 2017 statement. “Where there is queueing, if upstream approaching drivers are not aware of the queue downstream, there’s not enough time to hit the brakes to slow down or stop, thus, increasing the likelihood of a crash.”

Edara’s work uncovered a few key pieces of data, according to the statement. First, the use of VASL systems is effective in gradually slowing down drivers as they enter a work zone. VASL use resulted in a 39 to 53 percent decrease in average queue length, a 7 to 11 percent throughput reduction and just a 4 to 8 percent increase in travel time.

His data also suggests a boon when it comes to safety. For example, maximum speed differences decreased by as much as 10 mph, and rear-end collision conflicts dropped by 30 percent along with a 20 percent decrease in lane changing conflicts. Essentially, travel time was slightly longer, but lines were shorter and collisions less frequent.

The takeaway? VASLs may be a viable option for municipalities with the resources to implement and track such a system.

“You can get both safety benefits and mobility benefits by deploying variable advisory speed limit systems,” Edara said. “It helps lower the rush-hour congestion in urban areas.”