The Salt and Pepper Shaker Museum in Gatlinburg, Tenn., situated near the town’s entrance to the Smoky Mountains National Park, opened in 2002 and hosts more than 200 visitors a day during the summer months. (Photo provided)

Nestled serenely among the picturesque Smoky Mountains lies Gatlinburg, Tenn., its 4,200 residents and the largest collection of salt and pepper shakers in the world.

The collection started about three decades ago with a single pepper mill. “We did not have a pepper mill at home that worked,” wrote the late Andrea Ludden, who cofounded the Salt and Pepper Shaker Museum with her husband, Rolf, in 2002, on the museum’s website.

“So off we went on a quest to find the right one. At first we found one or two, then three or four, until it became an entertainment.

“Soon we found the world of shakers, where the shapes, themes and colors are endless.”

Andrea’s background as an archaeologist enticed her to study the history and cultural significance of the shakers.

A few years later, when Andrea’s son, Alex, gave her a digital camera for Christmas, she commenced taking photos of her already sizable and steadily growing collection of salt and peppers shakers, which were sprinkled around the family home and stored in boxes beneath the house.

She took measurements and compiled meticulous notes about each of the thousands of sets.

She undertook the challenge of categorizing each set, a task perhaps rivaling that of lexicographer Peter Mark Roget compiling his first thesaurus. In fact, the museum boasts 20,000 sets of salt and pepper shakers and 1,500 pepper mills, significantly more than the 15,000 words categorized in Roget’s inaugural volume published in 1852.

Rolf, a jewelry designer by trade, was attracted by the creative artistry of the various shakers, which the Luddens collected from around the globe.

The museum’s welcome sign encapsulates the fascinating array of neatly arranged items on 10 levels of glass-encased shelves: “Inside you will see an amazing variety of salt and pepper shakers from the smallest to the largest, made from anything and everything you can imagine, including sea shells, light bulbs, gourds, eggs, antlers, walnut shells, bone, plastic, grass, stone, gold, silver and aluminum.”

Designs depict the factual and fictional, from U.S. presidents and Amish farmers to Winnie the Pooh and Mickey and Minnie Mouse.

Some shakers commemorate natural wonders, such as Niagara Falls and Mount St. Helens. Others depict manmade achievements like Mount Rushmore and the space program.

Also represented are thousands of species of flora and fauna from around the world.

Categories of shakers are further divided into color schemes.

Even after the opening of the first museum in 2002, the Luddens assiduously augmented their collection, necessitating the move to its present larger location in 2004. Arranging the display at the current location took Andrea 45 days. The Luddens opened a sister museum in Spain in 2010 with a similarly sized inventory. 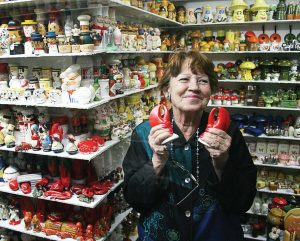 The late Andrea Ludden, cofounder and curator of the Salt and Pepper Shaker Museum, displays one of the more than 20,000 unique sets of salt and pepper shakers at her museum in Gatlinburg, Tenn. (Photo provided) 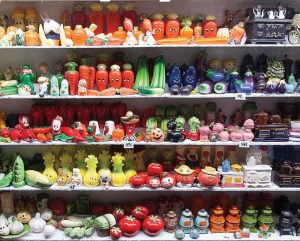 Replicas of foodstuff from around the globe are a staple of the displays at the Salt and Pepper Shaker Museum in Gatlinburg, Tenn. (Photo provided) 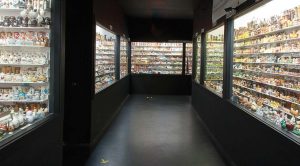 The museum’s walls are painted black and its floors dotted with directional arrows to allow visitors to maximize their viewing experience. (Photo provided) 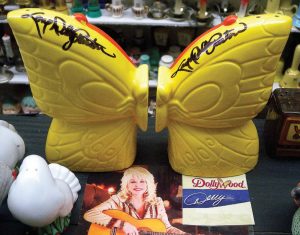 The Dollywood butterfly wing salt and pepper shakers, autographed by Dolly Parton, are among the variety of celebrityinspired sets on display at the museum. (Photo provided)

The website touts the primary purposes of the museums:

The museum has hosted tens of thousands of visitors since it opened near the Gatlinburg entrance to Great Smoky Mountains National Park, the most visited national park in the United States. During the summer, upwards of 200 people a day walk the display halls, which are painted black to highlight the collection.

The museum contains a gift shop where the $3 admission — children 12 and under are free — is applied to the purchase of any salt and pepper shaker set.

The museum’s website is educational, with articles on salt, pepper and related topics. Among the interesting facts gleaned from the site:

The museum is open 10 a.m. to 2 p.m. Monday through Saturday and noon to 4 p.m. Sunday with occasional weather-related closings during the winter.

The museum is located at 461 Brookside Village Way, Gatlinburg, Tenn.