Across the U.S., more than 1,800 off enders are released from prison every day. Oft en these individuals have been incarcerated for a number of years and are released only with the clothes on their backs, any belongings they’ve been able to purchase and a little bit of money.

More than 60 percent of formerly incarcerated people will commit another offense and end up behind bars again, according to the national average. Reentry programs, however, can help stem criminal recidivism. (Shutterstock.com)

According to the national average, more than 60 percent of these people will commit another offense and end up behind bars again — unless they find themselves in a reintegration program.

The Second Chance Act of 2007 was enacted to break the cycle of criminal recidivism, improve public safety, and help state, local and tribal government agencies and community organizations respond to the rising populations of formerly incarcerated people who return to their communities. The SCA helps fund programs that help formerly incarcerated individuals through the transition back to life on the outside by aiding with job training, housing and access to community resources.

One such program is the Project H.O.P.E. Reentry Initiative — H.O.P.E., which stands for Helping Off enders Pursue Excellence, is housed within The Neighbor Center in Mobile, Ala.

“People who have been incarcerated have been given two sentences: the first when they are in jail and the second when they come out and are labeled a convict for life,” Gwendolyn Darty, the reentry director for The Neighbor Center, said. “The purpose of our program is to give these individuals a second chance.”

Project H.O.P.E. was launched in 2015 and has since provided aid for more than 140 individuals. Job readiness, education, transportation, healthcare, disability services and referrals for employment are just a few services provided.

“We were concerned about the injustice, especially in terms of black males in our area, that people face when they exit jail,” Darty said. “The system just isn’t fair for them — it doesn’t set them up for success. We start helping them with these basic needs like food, shelter and employment, both before they get out and once they’re released.”

Before being released, Darty will meet with individuals to determine what their greatest need will be once they’re out. She will then reach out to local contacts to start building a plan for them. Once they’re out, the plan is put into action.

“We’ll provide transportation vouchers and help them find appropriate healthcare, especially when dealing with mental health,” she said. “We’ve also recently gotten funding to start a small housing program, so when people have nowhere else to turn or have burned bridges with all of their loved ones, we can help them get back on their feet and find a place to stay.” 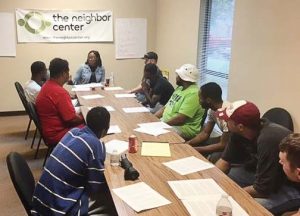 Participants take part in an anger management session at The Neighbor Center in Mobile, Ala. The center also has the Project H.O.P.E. Reentry Initiative, which helps formerly incarcerated individuals transition back to life on the outside. (Photo provided) 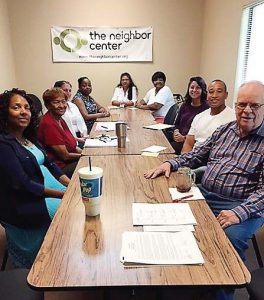 A board oversees the operations of The Neighbor Center. (Photo provided)

Project H.O.P.E. employees and volunteers partner with agencies across the city to provide assistance for individuals and have had great success, but Darty said forming partnerships isn’t always an easy task.

“Most of the time when you are dealing with agencies and talking about offenders, the answer is automatically a ‘no,’ because they don’t think people can change,” Darty said. “That’s when we start to explain to them that most of these individuals have been incarcerated for a number of years, and if nobody gives them a chance, they’re going right back. Once we have that conversation, places are usually willing to work with us.”

RISE, the Reentry Initiative through Structured Employment, based in Fishers, Ind., has a similar belief: Once offenders can find steady employment, they’re more likely to become productive members of society and less likely to reoffend.

“For the city of Fishers, this is all about giving RISE participants a second chance while accessing an underutilized segment of the workforce,” said Fishers PR Director Ashley Elrod.

Still in the pilot phase, RISE works with offenders to establish a monthly training regimen that includes basic personal financial management skills. Participants are also given the option of going through the agency’s in-house CDL class.

If there are positions available within the Fishers Department of Public Works when participants complete the program, an opportunity is offered for them to apply for full-time employment. If no positions are open and they were model employees, they can receive a letter of reference from the mayor.

A large factor of the program’s success, Elrod said, is that RISE participants are treated the exact same as any other new employee.

“RISE participants have the opportunity to start fresh as an equal among their coworkers: everyone gets the same uniforms, training and experiences without being singled out,” she said.

Since the program’s infancy in 2015, 15 RISE employees have been hired by the city.

Darty and Elrod both caution that while reentry programs are important and overwhelmingly helpful, it’s not an easy task to get off the ground.

“There are many challenges like transportation, scheduling and helping our participants adjust to life beyond Hamilton County Corrections,” Elrod said.

Beyond the logistical challenges, the element of humanity comes into play as well, Darty said.

“It’s easy to impose what you think people should do on them,” she said. “You need to listen and see what they want. You need to also understand that sometimes you can’t help somebody if they don’t want to help themselves. Just understand you’re going to run into a lot of unfair things that you can’t control, so keep your head down and focus on what you can control.”