Any bridge that has put in 60 years of service and accommodates about 20,000 vehicles on a daily basis is going to need some routine maintenance every now and again. However, when officials in Montgomery County, Ohio, examined the Harshman Road Bridge, which spans the Mad River between Springfield Street and SR 4, they knew it required more than a little TLC. 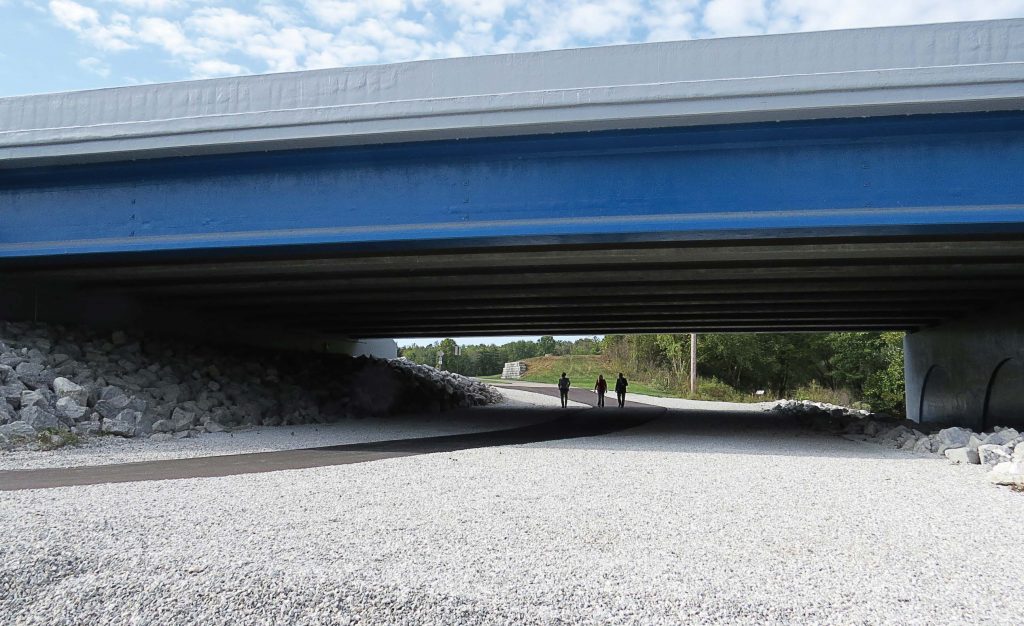 “It needed to be replaced,” said Paul Gruner, Montgomery County engineer. “We couldn’t really patch it anymore. The expansion joint was getting rusty. Deteriorated concrete was falling onto the bikeway below the bridge. There was a lot of erosion around the piers in the water, and we needed to get some piling down there.”

Officials also wanted to widen the bridge in order to accommodate two lanes of traffic in each direction and include a dedicated bike lane as well as put in points for kayaks. It was an ambitious two-year project that cost $7.3 million, but it was a welcome upgrade that has garnered a lot of public support. “It’s an attractive bridge and we’ve had a pretty positive response from the public,” Gruner said.

Planning for the Harshman Road Bridge project began in 2015 when county officials conducted extensive examinations of the bridge to identify those areas that were structurally deficient. Although the bridge did not look that bad aesthetically — due to a temporary overlay — there were some serious issues that needed to be addressed. The steel beams were rusting. The deck was falling apart and cracks had appeared in the pier and abutment walls. County officials installed rocks around the pier at one point to keep the erosion problems from getting worse, but eventually the pier cracks required a more long-term solution.

“At that point, we decided to replace the entire bridge and update the structure as well,” Gruner said. “The Harshman Road Bridge was constructed in 1958 and was 311 feet long by 59 feet wide. The new bridge would be 311 feet in length and 92 feet wide with two lanes in each direction as well as a center lane for left turns. It would also feature a new bike path, which we knew would be a popular addition.”

Funding for the project came from a wide range of federal, state and local sources, including $5,607,063 from County Local Bridge Program, Surface Transportation Program and the Federal Land Access Program; $1,099,299 from the Ohio Public Works Commission; and $622,298 from the Montgomery County Engineer funds.

“We applied for everything we could. We even tied into some funds because the bridge is connected to the National Museum of the United States Air Force at Wright Patterson,” Gruner said. 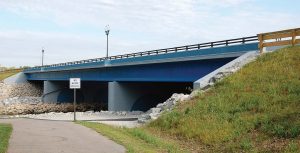 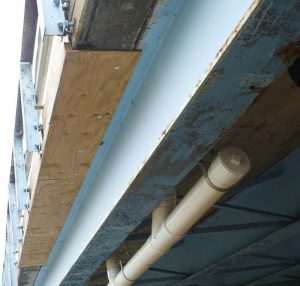 Plywood was used to prevent debris from falling on the bike path below prior to the construction of a new bridge. (Photo provided) 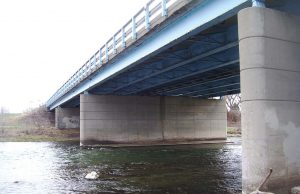 Pictured is the Harshman Road Bridge in 2011. Its deck had been falling apart while cracks had appeared in the pier and abutment walls. Erosion also posed a concern. (Photo provided) 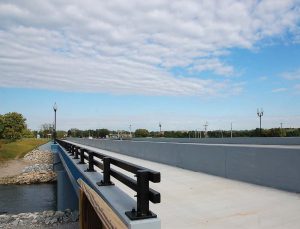 The newly reconstructed Harshman Road Bridge is wider and able to accommodate two lanes of traffic in each direction and also has a left turn lane. The community loves the addition of a dedicated bike lane, which is protected from traffic, and the put-in points for kayaks. (Photo provided)

Once the money was in place, officials opened up the bidding process for the project, eventually awarding the Harshman Road Bridge to the Eagle Bridge Company of Sidney, Ohio. Founded by John Frantz in 1902, it is a family-owned-and-operated company that is in the Ohio Contractors Association Hall of Fame. Although it has done its fair share of road building whenever there was a need in the market, the company concentrates most of its efforts on bridgework for the Ohio Department of Transportation in the western half of the state.

In order to replace the bridge without causing any undue inconvenience on the public, the contractor spent a few weeks installing temporary pavement and preparing the bridge to maintain traffic during the construction phase. It was determined that one lane of traffic in each direction would be open while the other half of the bridge was under construction. The first phase of the project began in November 2015 while the second portion got underway in August 2016. “The whole thing went pretty smoothly except for the obvious slowdowns during the construction phase,” Gruner said.

On Sept. 29, 2017, Gruner and other officials held a ribbon cutting ceremony to formally unveil the new bridge to the public, and so far, the response has been tremendous. Not only does the new bridge look better than the old one, the public is pleased with the dedicated bike lane on the west side that connects the two entrances to Eastwood Metro Park as well as the put in points for kayak access.

“With the additional features, it’s like a whole new amenity for the community,” Gruner said. “People seem to like it a lot.”