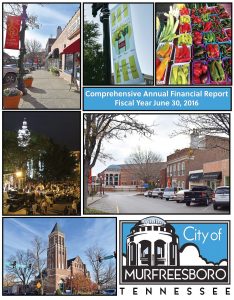 Murfreesboro’s award-winning June 30, 2016, fiscal year comprehensive annual financial report highlights City Hall’s proximity to the square and the regular interaction and support the city provides to the downtown area. It also features the city’s selection of shopping, restaurants, personal service businesses and professional and governmental offices that are all located in the downtown core. (Photo provided by Murfreesboro, Tenn.)

Murfreesboro, Tenn.’s, motto is “Creating a better way of life,” and as far as the city’s finances are concerned, it seems to be living up to that motto. The city has earned the Certificate of Achievement for Excellence in Financial Reporting from the Government Finance Officers Association for 19 consecutive years. It has also received the GFOA’s distinguished budget presentation award. Murfreesboro City Recorder and Finance Director Melissa Wright shared what she believes has contributed to this distinction.

“Our office has been dedicated to producing a comprehensive annual financial report each year that meets the standards as required to submit for the GFOA Certificate of Achievement for Excellence in Financial Reporting program because we believe it indicates management’s desire to be transparent and to share information by giving the reader a better understanding of our financial performance and our community as a whole,” she said.

“Throughout the year we make note of information that we may want to highlight or share in the report, and we encourage staff to share information that might be of interest to outside parties. Our audit firm has been instrumental in guiding us through the certificate program and making sure we hit all of the marks expected for a successful application,” Wright said.

The GFOA established the Certificate of Achievement in Financial Reporting in 1945 to both encourage and assist state and local governments to move beyond the minimum requirements of generally accepted accounting principles. Additionally, GFOA encourages participants to show evidence of transparency and full disclosure — something successful governments are recognized for.

According to GFOA website, “The goal of the program is not to assess the financial health of participating governments, but rather to ensure that users of their financial statements have the information they need to do so themselves.”

The more than 3,900 state and local governments that participate each year are asked to submit their reports within six months of the end of their fiscal years. The review process takes another four to six months. Reports submitted to the CAFR program are reviewed by selected members of the GFOA Special Review Committee, which consists of members with expertise in public sector financial reporting. Among these members are financial statement preparers, independent auditors, academics and other financial professionals.

Benefits to participating in the program include giving users access to high-quality reports that promote better transparency to citizens and other stakeholders. Credit rating agencies and others may view participation and receiving the award as positive factors in decision-making. Also, as financial reporting standards evolve, participation helps governments implement those standards into their reports. A grade is assigned to each section of the report, with comments and suggestions for improvements being included as well. 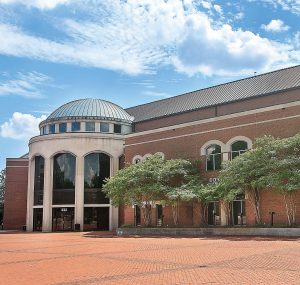 A city of 108,755, Murfreesboro, Tenn., has
been awarded the Government Finance Officers Association’s Certificate of Achievement in Financial Reporting for 19 consecutive years. Pictured is its City Hall. (Photo provided by Murfreesboro, Tenn.)

Within the city’s tax and finance department, there are four groups of staff members, according to Wright. The first group handles administrative duties, including phone calls, council agendas and minutes, packages, supply ordering and advertising. There are two members in the administrative group.

The fourth group of six staff members, including Wright, works with the general ledger; balances bank accounts; handles accounts receivables; initiates journal entries; oversees internal controls; manages the budget, fixed assets and beer and liquor licenses; and works with both the independent audit firm and all of the city departments to maintain accurate information for the general ledger.

All levels have different experience needs when hired. Finance personnel accountants are required to have a four-year college degree with a major in accounting and, generally, at least two years of related working experience when hired.

“We have been fortunate and have had excellent applicants and currently have five CPA’s in this department. Twice we were able to hire a CPA when the license was not required by the job description,” Wright said. “This licensure often is tied to a candidate whose attributes include the ability to problem solve, research and reach out to assist others without constant supervision.”

On July 1, 2015, the city went live with a new modern financial software package — Munis, sold by Tyler Technologies — which replaced the COBOL system. Wright said the city continues to add additional modules as the staff gains experience with the base general ledger software.

Although not really an instrumental part of the city receiving the Certificate of Achievement in Financial Reporting Award, the newer system has been helpful.

“It has been helpful in allowing us to research information much easier when we are working on pulling the report together,” she said.

The new software has also made it easier for department heads to be more involved with the general ledger aspect of their operations.

“We now are able to scan invoices into software and a department head can look and see what has been paid or what their staff purchased by looking at the invoice image. Previously, they had to scan and keep copies or call finance and ask for a copy of invoices,” she said. “This new ability to see it from their office is certainly a time-saver and can help them make decisions a little faster if they are basing it on this type of information.”

Wright pointed out that the city received the CAFR award for 18 years while on the old COBOL system.

She credits working closely with the audit fi rm as a factor in the city’s consecutive awards. Though, she noted that not all of the individual reports included in the CAFR are done by their audit firm as the schools, the electric utility and a small cemetery are audited by two other firms.

“We recognize that our audit fi rm has been instrumental in pulling all of the information together into one report. We work closely with them and their expertise has had a major impact in getting the report complete on time and making sure all of the items on the GFOA checklist have been covered,” she said.

Wright advises that it takes a team of people working together to bring excellence in fi nancial reporting and budgeting.

“I suggest making sure you have a good team both in your department and outside your department by working with your independent audit firm. Several of our staff are former auditors, so we recognize that a good working relationship with our auditors is important,” she said. “The city’s auditors know we want to do it right and that sometimes errors will be found, but we want to learn from them so they won’t be repeated. If you treat the auditors as an adversary, you are not open to learning or hearing suggestions of how to improve in the future.”

Wright said if the city or town is small in size, “sometimes it’s better to hire a firm to help get you to the point of closing your books and assisting with CAFR reporting, and then hire another firm to come in and audit the work.”

Although hiring two firms might at first seem costly, it’s likely less of an expense than hiring staff year-round if they’re not needed.

She also suggested hiring the best staff. “Never be afraid to hire someone who may be smarter and have more credentials than you do. I see that as a downfall so often — that the person in charge wants to be the brightest one in the room. The better your staff, the better your department will be.”

For more information on the Certificate of Achievement in Financial Reporting program, visit the GFOA’s website at www.gfoa.org.